Before and after the war, part 2 (JOSEPHINE KAMM, Peace, Perfect Peace) 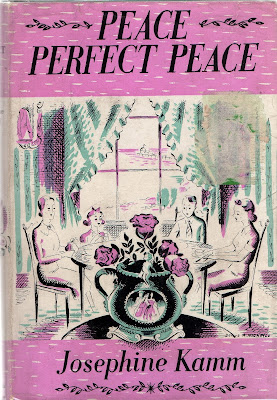 In my last post, I focused on Noel Streatfeild's really delightful novel of the earliest days of World War II, The Winter Is Past.

And if Streatfeild's novel provides a fairly detailed view of what life was like at the beginning of the war, Josephine Kamm's Peace, Perfect Peace (published in 1947 and acquired recently in yet another little book buying splurge) is almost overwhelming in its level of detail about life in the first months after the war has ended. It's irresistible in its wealth of information about postwar life—Kamm seems to have set out to meticulously record as much of the situation around her as she could, making it a central part of the plot and the drama—rather like a photographer who, sensing they're in the middle of history even while going about mundane day-to-day activities, might pull out a camera and start documenting. Obviously, not everyone realized the fragile, passing nature of that particular moment, as relatively few novelists seem to have taken it as their subject matter, and none that I know of did so to the extent that Kamm does here. I've read quite a bit about the war and the postwar years, both history and fiction, and I learned numerous things from Kamm's book that I'd never known before, as well as having brought home to me the actual day-to-day impacts of some of the issues I already knew about.

The novel (recommended for my WWII Book List by Ann—thank you, Ann!) begins by focusing on Clare, who spent the war working in a bureaucratic government office evacuated to a seaside town, but is now back in London, struggling to produce a follow-up to her one promising novel, published just before war broke out. At the beginning of the novel, Clare (who is also engaged in a hopeless affair with a married man) decides to take a break from the struggle and return to Seaport to visit her friend Joanna Smallwood and the two grandchildren, Giles and June, whom Joanna has had with her while her daughter-in-law Frances worked in the A.T.S. and her son served abroad.

From there, although Clare reappears occasionally, trying to convince herself to break it off with the married man and trying to continue her novel, the main focus of the novel shifts to the tense relations between Joanna and Frances, who is now returned from the A.T.S. and is planning to take her children back to London. But Joanna has become very attached to Giles and he to her, and Frances believes that Joanna is undermining Giles' feelings toward his mother in order to keep his affections for herself.

It's a somewhat unusual structure for a novel, and I felt that it left Clare a bit high and dry at the end with an only partially resolved storyline. But Kamm's plotting is effective, and the novel was a compelling read even when it felt a little disjointed. I also liked that, just as in Streatfeild's novel, Kamm's characters are all flawed in convincing ways—no idealization here—and the unusual structure allows for each of the characters to be viewed from at least two angles and with varying perspectives. I suspect that not all readers will find the psychology between Joanna and Frances entirely satisfying, though the reader is privy to Joanna's thoughts and so it's clear that Frances is right in her assessment. But from Clare's different perspective on her friend, we get to see the kind, caring, loving side of Joanna as well, which is refreshing. Kamm's characters are three-dimensional, however awkward the structure required to show them to be. 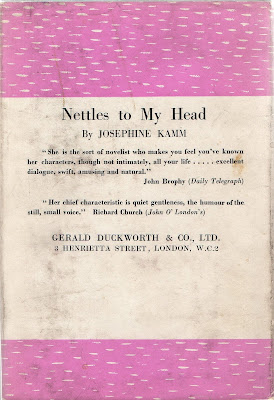 At any rate, I didn't find that these minor flaws weakened the novel very much overall, because it's really the plethora of insight into postwar life that is the selling point here. Sometimes it's just a passing detail that's striking, as when Clare notes that "the sound of Mr. Turner's typewriter told her that yet another never-to-be-read pamphlet was on the stocks," and we recall, having read the author bio on the book's jacket, that Kamm herself spent much of the war writing pamphlets for a government office. Or there's this brief passage as Frances comes outside one distracted evening:

Instinctively Frances fumbled in her handbag for a torch before she faced the lights and the certainty of the lifted black-out. For some time now she had taken streetlighting for granted, but in her present sense of withdrawal she had forgotten.

Sometimes it's a description of something we've seen before in wartime novels, now with a changed significance in the postwar days:

Seaport bay was sheltered on either side by red Devonshire cliffs and formed a pleasant retiring place for ex-Army officers, members of the I.C.S. and elderly women. A number of them were to be seen now sitting in covered seats reading The Times or enjoying the first sleep of the day. They never sat on the beach, for to reach it they would have to pass through a rusty barbed-wire entanglement which had been pierced in a number of places by determined summer visitors, some of whom now lay face downward on the stones exposing their pink or brown backs to a damp breeze.

The residue of the Blitz also hangs about (literally) in the dust in Frances' flat:

The only flat which Frances Smallwood had been able to find was on two floors of an inconvenient house in a Bayswater street. The rooms were lofty but narrow and awkward to arrange, for they were matchboarded off from one another, having once been two large rooms instead of four small ones, as they now were. Although the house had escaped bombing, the blast had brought about cracks in the walls and draughty subsidences of floorboards and window-frames. Through the windows, whether open or closed, the dust and dirt of the street drifted to settle thickly and stickily on the furniture. There was a garden at the back, or rather a strip of humpy lawn and a few laurel bushes, but this was the property of the ground-floor tenants, and Frances had been told that the children would not be allowed to play in it. The view in front was of a row of houses similar to their own, although there were gaps where one or two had been bombed out of existence. Some of the windows were shrouded in net, and many still kept their black-out curtains as a sign that their owners lacked the coupons, even if they had the money, to buy new material.

And those of you interested in the clothing situation during rationing and material shortages might be interested in Clare's attempt to spruce herself up with a simply wool dress:

She went by Underground to Piccadilly Circus, intending to work her way up Regent Street and, if necessary, along Oxford Street. By the end of the morning she had visited at least half a dozen shops. In one or two she had been treated with friendly kindness but in the others she met with chilly indifference or disdain. She was shown a number of unsuitable dresses made of unsuitably thin materials. "Wool," one saleswoman told her, "is a thing of the past, or the sort of wool you're looking for is. It must be quite some time since you tried to buy a wool dress, isn't it?" Clare admitted that it was and also turned her back on a soft, blue-grey frock which seemed much warmer than the others but cost twenty guineas. In the end she bought a bottle-green which she would have to alter herself before it would fit and which cost her a good deal more than she had intended to spend.

There are numerous other passages I could share, but the last passage I'll quote is lest I've given the impression that Kamm isn't a perfectly charming and interesting writer as well as a grade-A documentarian. Here's Frances' young daughter discovering the unconsidered—and entertaining—implications of bombs:

"So do I, but the landlord won't let us. He says that fires make the flat dirty.''

June shouted with laughter. "But it's dirty already. I know you do your best, but there must have been very dirty people in it before we came.''

"It's partly due to the bombing. Bits of walls and ceilings and things fell down even in houses which weren't actually bombed. There's a house," said Frances, pointing at a gap in the street, "or, rather, there isn't a house, which the bombs knocked down altogether."

"Goodness gracious! I didn't know bombs actually did any damage. If anybody had been in that house they might have got hurt, mightn't they?"

"They might," replied Frances, pleased to think how well she and Joanna had succeeded in keeping the horrors of war from June.

"I wish I could have seen it happen. There might have been some blood and bones."

This is not the easiest novel to get one's hands on, unfortunately, but if you have an opportunity, I'd urge you to seize it. I'm hoping to check out one or two of Kamm's other adult novels as well, and of course, if you're not aware already, I should also mention that Kamm went on to become something of a trailblazer for her early "young adult" fiction, almost before there was such a genre—most famously with Young Mother (1965), which tackled teenage pregnancy in a sensitive and nonjudgmental way.

Thanks again to Ann for putting this book on my radar!

Posted by Furrowed Middlebrow at 5:37 AM