No longer a fantasy: the first real-life Furrowed Middlebrow titles (part 1 of 3)

I promised a couple of days ago, when previewing the new Furrowed Middlebrow imprint colophon, that I would have real announcements very shortly, so here goes. I'm practically giddy with excitement (well, perhaps that's an exaggeration—I don't get giddy very often—but I am quite happy and awfully, awfully relieved to finally stop keeping secrets from you all). (By the way, if you missed the news about my publishing venture, check out the first reveal here and the colophon here.)

I know it's a bit coy to divide the announcement up into three posts—one for each of the three authors—but I can't bring myself to lump them all together because I want each of these three wonderful authors to get their props, their dues, their R-E-S-P-E-C-T, etc.

When I first compiled my "wish list" to send to Dean Street Press, there was, as you might imagine (especially since you know how I am), a fair amount of agonizing, obsessing, and handwringing as I tried to prioritize the authors and books that were absolutely the best and most exciting discoveries from my time as a blogger. But there was really never any doubt what the very first title should be, as it was in fact one of the handful of books that made me want to start blogging to begin with. At the time, I felt I just had to tell others about such a wonderful discovery. Imagine my delight when it turned out that we could fairly easily acquire the rights to it, and I could share it with you in a more practical form.

…obviously, Rachel Ferguson's glorious WWII novel, A Footman for the Peacock (1940). I've raved about it here repeatedly (see my original review of it here), so it can't come as a huge surprise that we'll be publishing it. Suffice it to say that it's not only one of my favorite blog discoveries, or one of my favorite novels by a British woman. It's one of my favorite novels, period—a brilliant, hilarious, scathing satire of a loathsome upper-crust family with a long history of cruelty and a present characterized by dodging any type of war-related effort or sacrifice. And the occasional walk-ons of a Nazi-sympathizing peacock, who is probably the reincarnation of a footman run to death by the family's ancestors, are just icing on the cake! I hope you all love it as much as I do. 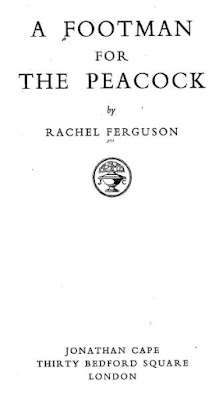 But that's not all. Once the realization set in that I might actually have the chance to publish Footman, I started to poke around among Ferguson's other out-of-print novels. (So now you know the impetus behind my ongoing project of reading and documenting most of Ferguson's body of forgotten work…) In March of this year, I posted about her followup to Footman, 1942's wonderful Evenfield, a charming, funny mockery of chronic nostalgia that is itself brilliantly nostalgic. 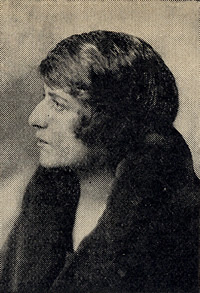 Evenfield immediately became my second favorite Ferguson novel, and I'm delighted that it, too, will be a Furrowed Middlebrow title come October.

And we're doing a third Ferguson title as well. Along with Footman and its followup, we'll also be releasing A Harp in Lowndes Square (1936), published the year before Persephone's Alas, Poor Lady. I haven't reviewed Harp here yet, but stay tuned…

I should mention that, as is likely to be the case with many of the Furrowed Middlebrow titles, this is the first ever reprint of these novels. Not only that, but none were ever published in the U.S. in the first place, so copies of the original British editions (all from Jonathan Cape) are now vanishingly rare, even in libraries, and almost never come up for sale (currently Abe Books lists not a single copy of any of them—one can only imagine what the price would be were a bookseller to find they had one on hand!). All of which makes me even more pleased that we're able to make them available again.

I should also mention that all of the Furrowed Middlebrow titles will be released in both e-book and physical (print-on-demand) formats, and they'll be available on both sides of the pond (i.e. no transatlantic shipping costs!).

I'd be thrilled it if in some small way these reprints can expand Ferguson's reputation. Although she certainly has her faults (see my recent post about some of her earliest work), I find her a fascinating offshoot of both experimental modernist literature and the more mainstream entertainment of the "middlebrow." She certainly deserves more attention.

And that's all for now. But stay tuned for announcement #2 in a few days!
Posted by Furrowed Middlebrow at 6:51 AM