No longer a fantasy: the first real-life Furrowed Middlebrow titles (part 3 of 3)

I admit that I'm still reeling a bit from last Thursday's referendum in the U.K., and I considered delaying this post because I wasn't feeling like putting up a cheerful blog entry after such a momentous event. But as some fellow bloggers have pointed out, perhaps cheerful posts and (particularly) good books are what we'll all need going forward after what the Persephone Post rather shockingly called "the most devastating day for Britain since September 3rd 1939." And indeed that statement, poignantly, perhaps makes today's announcement just a bit more appropriate. I've often taken inspiration, in rough times, from reading about the WWII Home Front and how people bravely soldiered on in the midst of terrible tragedy, so I'm rather glad, for what it's worth, that my last announcement is about one of the very best such books I know.

And so we come to the last of the announcements of the new titles being released as Furrowed Middlebrow Books this October. And I've been excited about all of them, but as I hinted a few days ago, this one in particular is a doozy!

The other two authors I've announced—Rachel Ferguson and Winifred Peck—were both included on my initial "wish list" sent to Dean Street Press. But the third author was not. Why, you ask? Certainly not because I wouldn't have been thrilled at the prospect of publishing her. Rather, it was because I had already been in email contact with the author's son, and knew he was planning to release his her work himself. As far as I was concerned, therefore, she was "off the market," and I was resigned to merely looking forward, as a fan, to the release of her books.

But a few weeks after submitting my wish list to Dean Street, I suddenly thought that it really couldn't hurt to check in with the author's son to see how things were progressing. Purely innocently, of course, and with no ulterior motives… Ahem. I sent him an email, asked how the books were proceeding, and just happened to mention our new publishing venture. And to my amazement and delight, within a few days we had his provisional agreement to let us publish his mother's work!

Now, as I said, I love all the authors we're reprinting (or we wouldn't have pursued them to begin with), but this one is particularly exciting. Because if I had asked you all, a few months ago, "Of all the books I've discussed on this blog, which one do you most wish you could get your hands on?", I'll bet a fair number of you would have replied that you wanted the chance to read this author's breathtaking, gut-wrenching, endlessly entertaining memoir of the Blitz in London.

I can hardly believe it.

My first batch of new titles contains my all-time favorite WWII memoir—Frances Faviell's A Chelsea Concerto (1959), a book that absolutely deserves to be appreciated as a classic among WWII writings and among memoirs more generally. I reviewed it (and raved about it at length) here, so I won't reiterate all of my passionate adoration, but suffice it to say the book needs to become a movie ASAP. (I'm torn between Cate Blanchett and Kate Winslet in the lead role...)

To some extent, in fact, the book is already a recognized classic among researchers and historians, many of whom have relied on it for books and anthologies about the Blitz. Most prominently, Virginia Nicholson featured Faviell prominently in her book Millions Like Us: Women's Lives During the Second World War. In a letter to the Daily Telegraph in 2010, Nicholson referred to the book as one of the finest examples of "Blitz lit" and bemoaned the fact that Faviell's books remained out of print. Happily, our edition of A Chelsea Concerto will contain a new introduction by Nicholson herself! 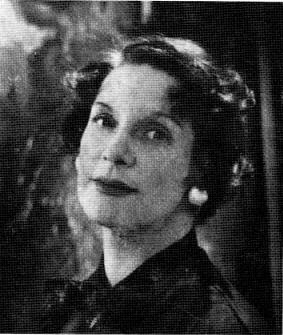 I know a couple of you have managed to track this book down and read it, despite its very limited availability, but I can't wait for the rest of you to have a chance to read it. Inexplicably, there was never even an American edition of the book. 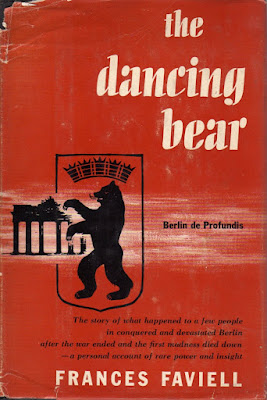 But Faviell's work doesn't end with this one title. We'll also be reprinting her acclaimed earlier memoir, The Dancing Bear (1954), about her life in Berlin (where her husband had a diplomatic job) immediately after the end of the war. Although the bombs are no longer falling during these years, the human drama is intense and fascinating. As in Concerto, Faviell's intelligence, attention to detail, and sensitivity bring the ruins of Berlin, the struggles of the German people, and the sometimes idiotic bureaucracy of the city's various sectors vividly to life. I learned about numerous aspects of postwar life in Germany that I've never encountered elsewhere, and much of it is centered around one German family the author befriended soon after her arrival. Had she not written one of the most brilliant of all WWII memoirs, Faviell would deserve to be remembered for The Dancing Bear. 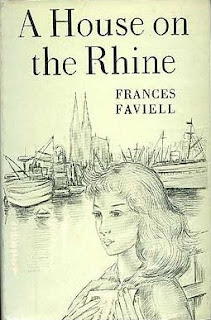 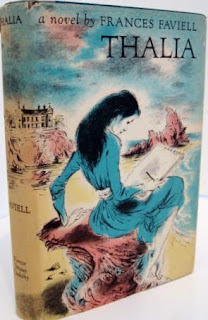 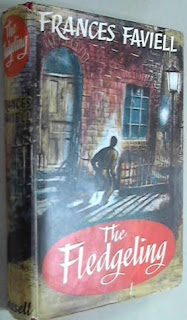 And I'm delighted to note that Furrowed Middlebrow Books will also be reprinting Faviell's three critically acclaimed novels—A House on the Rhine (1956), Thalia (1957), and The Fledgeling (1958)—which have likewise been out of print for decades. I haven't yet written here about her fiction, but stay tuned.

Sadly, since Faviell (real name Olivia Parker) died of cancer at the tragically young age of 46, these five titles constitute her entire literary output. I'm delighted, however, to know that we're able to make this underrated author's complete body of work available for the first time in decades.

And that's that! A first rollout of nine titles (plus two related Dean Street Press titles). If your memory needs jogging (and also just as an excuse to see the whole list together, which gives me enormous pleasure), here's the full list of October releases:

After that, our second batch of titles is set for release in early 2017. We have a few titles already confirmed that are among my very favorites (and have been written about here already, though I can't tell you which ones they are just yet) and a couple more authors (also written about) that we're pursuing (wish us luck with rights and heirs!). So, more announcements will follow in due course.

I hope you're even a tenth as excited about these titles as I am.
Posted by Furrowed Middlebrow at 11:55 AM