No longer a fantasy: the first real-life Furrowed Middlebrow titles (part 2 of 3)

(If you missed the first Furrowed Middlebrow publishing announcement a few days ago, check it out here, and you can also see the new colophon for the series here.)

In my last post, I revealed the first titles being reprinted by the Furrowed Middlebrow imprint this October—three lovely novels by Rachel Ferguson. Now it's time for revelation number two.

On my list of all-time favorite novels—and certainly of novels that I re-read most often—are E. M. Delafield's delightful Provincial Lady novels. Now, as much as I wish I had somehow unearthed a hitherto lost and unpublished volume in that series, alas, such is not the case. But I do have the next best thing...

Like the Provincial Lady, Camilla Lacely, wife of the vicar of Stampfield, a medium-sized town not far from Manchester, decides, in the early days of World War II, to keep a diary detailing the worries, controversies, necessary diplomacies, and inadvertent offenses she must negotiate in the course of one week—from the offense caused to many by the curate's passionately pacifistic sermon (through much of which, alas, Camilla has snoozed, thus adding to her difficulties in discussing it with outraged parishioners) to anxieties about her son, off training with his regiment, not to mention servant woes, worries about friends, and a potential romance in the town. The resulting diary makes up Winifred Peck's hilarious and sometimes touching Bewildering Cares (1940). 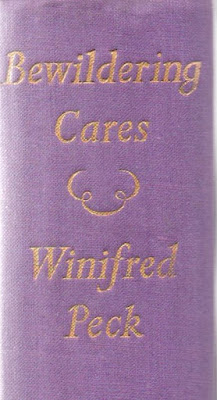 I reviewed Cares here. It remains one of my favorite rediscoveries and one I can re-read almost as often as Delafield. Apart from House-Bound (1942), her later World War II novel about a woman learning to make do without household help, which was reprinted by Persephone, none of Peck's novels have been reprinted in recent years. This is particularly bewildering in the case of such a wonderful book as Bewildering Cares, and I'm very pleased that we can now rectify that situation. 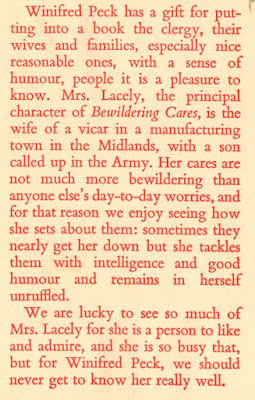 Cares is the only Peck title that we'll be reprinting at this point, but those of you who are keeping track know that it's certainly not the only one of her works that I've raved about here. As it happens, even before my inquiry to Dean Street Press led to our current collaboration, I had already emailed them to suggest that they might be interested in Peck's two wonderful mysteries, The Warrielaw Jewel (1933) and Arrest the Bishop? (1947). I reviewed them here and here, and loved them both, so I am thrilled to be able to announce, with Dean Street's blessing, that both will be added to Dean Street's already-impressive list of Golden Age mystery reprints. Some of you already know that Peck's brother, Ronald Knox, was a successful mystery writer himself, but in my opinion Winifred's novels have every bit as much going for them. Dean Street's plan is to release them in October, along with the FM reprint of Bewildering Cares, so there will, happily, be three hitherto-unavailable titles by Peck released all at once! 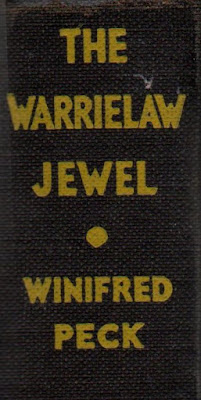 Just one more announcement still to come, but it's a doozy. I could never say that I've saved the best for last, since I wholeheartedly love all of these books, and they're all wonderful in their own way. But suffice it to say that I think the final announcement might cause the biggest splash, and I'm still amazed and thrilled that we were able to snag this particular author—and one of her titles in particular, which deserves, in my opinion, to be considered an absolute classic of—er—but that would be giving away too much…

Check back in a few days!
Posted by Furrowed Middlebrow at 5:30 AM