The hospitality of parenthood: BARBARA WILLARD, Winter in Disguise (1958) 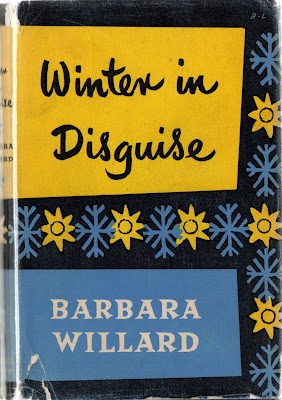 It was her father's turn to offer Clare the hospitality of parenthood.

As intriguing, concise opening lines go, you could do a lot worse than this one. A "widening world" novel focused on Clare Saville, 15-year-old daughter of divorced parents—father a film star just past his sell-by date, mother an icy diva who has remarried and prefers her younger children—Winter in Disguise at its best reminded me of a masterpiece of this genre, Pamela Frankau's A Wreath for the Enemy.

Most of Clare's childhood has been divided between her convent boarding-school and her grandmother's home, as both parents were too indifferent to bother with her. But now, following her grandmother's death, she has spent an uncomfortable time in her mother's home in London, and is now being shipped off to Ste Amélie in France, the set of her father's latest film (in which he has been unhappily relegated to playing second fiddle to a child star). She has rarely seen her father, and her slightly romanticized recollections of him soon fade against the more cynical reality, which Willard effectively conveys in his first encounter with Clare:

Steve glanced over Mr Hyams's head and saw Clare frozen halfway down the stairs. He was still. His face was instantly wiped clean and he prepared for the re-take. Grouped about the hall, the rest stood waiting for him to play his big scene. Newcomers entering noisily were shushed into silence.

The novel focuses primarily on Clare—who soon begins to plot how to get back to the safe haven of her boarding school—but a significant role is also played by the uneasy, ambivalent three-way friendship she forms with Essex Dorincourt and Michel Durand. Essex, the child star, is part enfant terrible and part the vulnerable victim of a vulturous, hysterical mother and a mentally unstable father, who has previously kidnapped Essex (at least according to Essex) on multiple occasions. Michel, meanwhile, is Essex's stand-in, whose mother runs a hotel in a nearby village, and is the grounded, down-to-earth, responsible vertex of the triangle, despite the tragedy of having lost his father in WWII and the responsibility of providing financial support with his film work.

Clare and Michel get swept up in Essex's fantasies that his father will soon kidnap him again, an event he eagerly awaits—both to rescue him from his mother and for the publicity it will provide for his career. But as it turns out, his fantasies have a disturbing tinge of reality, which will influence the lives of everyone involved. (By which I don't mean to suggest that the novel becomes a thriller, but there is a certain amount of emotional tension and uncertainty surrounding the events that unfold.)

I previously read and reviewed Barbara Willard's earlier novel Echo Answers (1952) here, and I enjoyed it a lot but wasn't completely raving about it. However, it has had the odd effect on me, which some books do, of staying firmly in my mind nevertheless, and its recollection evokes strong positive feelings. As someone who can usually quite easily forget every detail of a book I've only read once (a second read tends to solidify my memory), this makes me think there's more to it than I first thought, and Winter in Disguise too is leading me to think I must read more of Willard's work soon.

Willard is of course best known for her historical Mantlemass children's series and for her other children's books, but she also wrote 14 novels for adults, of which Winter in Disguise is the last. All of the characters are believable and vivid, but the great strength here is Clare, who came alive for me in a poignant, witty, and sometimes vulnerable way. Clare has learned a defensive "pertness" that can be irresistible—she may be only just realizing some of the complexities of life and relationships, but she already has a striking awareness of (and confidence in) her own perceptions, as in this encounter with her mother from late in the novel (no spoilers):

'Shall I tell them to send Clare's breakfast up to this room, Mrs Heathcote?'

'I'm not at all certain that Clare deserves any breakfast, Miss Dunbar.' She stood with her chin tilted and her eyebrows slightly raised. 'Do you intend to kiss me, Clare?'

'I'm not at all certain that you want me to,' Clare replied, pertly echoing.

And Willard has a flair for summing up complicated emotional situations with concision—as in the passages above, and especially in these two brief sentences:

Her mother meant nothing to her, nor her father. It was their lack that meant too much.

If you enjoy widening world stories, or vicariously visiting film sets, or just unsentimental, carefully-delineated, and well-written dramas of mixed characters in a more or less confined setting, this one might well be for you.

Posted by Furrowed Middlebrow at 7:24 AM