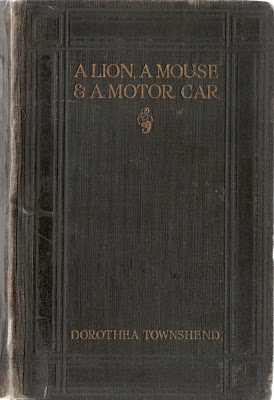 "Can it be me! Can it be me!" murmured Delia, as the train slowed and stopped at the private station. "This is a girl in a book, it isn't me at all!"

Delia Gwyn had spent the last ten years of her life in mothering her widowed father and two small brothers. She had vast experience in managing the village butcher and in planning the boys' winter garments--she had more than a slight acquaintance with Early Church Councils and the theories on the authorship of Homer, but of England in the nineteenth century she knew little. Still she had read the foreign correspondence of The Times to her father, and she knew something of European politics. Although she had never seen a play or danced at a ball, she knew that Sir Roger Bertram had so distinguished himself at the Courts of Vienna and Petersburg, that he had returned to England with all the éclat of a conquering hero. His mingled courtesy and audacity had distracted the diplomatists of Europe, but had averted more than one dangerous complication.

Delia Gwyn has had a distinctly uneventful life as a rector’s daughter, so when her well-to-do neighbor Lady Polwhele, at the suggestion of her gung-ho son Victor (nicknamed Polly), invites her to accompany her as her “spaniel” (general companion and dogsbody, though Lady Polwhele is too kind to take much advantage of the position) for a weekend house party at Bertramstone, family home of world-renowned diplomat Sir Roger Bertram, Delia is thrilled. And it seems that we are firmly in the realm of Jane Austen at Bertramstone, complete with its guardian ghost and a group of rowdy youngsters of whom Ms. Austen would surely have disapproved. 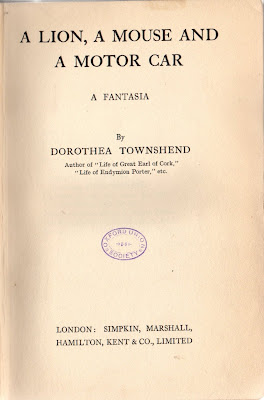 Dinner on the night of the Delia’s arrival is made memorable by the arrival of a Duchess:

The party was assembled, but one guest was lacking. The Duchess of Daventry was late, The Duke wandered up and down among the groups of guests evidently anxious for his dinner. The Bishop had engaged Lady John Kerr with half-whispered confidences, but the rest of the company had lapsed into the uncomfortable silence of people who do not want to waste good conversational openings before sitting down to table. The silence was broken by a crash and a scream. Instinctively every one in the hall wheeled towards the glass doors that shut off the grand staircase. A series of bumps, each bump accentuated by a shriek, followed the crash, and before any one could move, the swing doors were burst open, and into the midst of the petrified company dashed a large mat on which was seated a plump lady, gorgeous in satin and diamonds. She tobogganed in one long swoop down the hall, and from the crowd a wild voice shrilled out: "Achtung!" No other word broke the silence with which the petrified crowd stared at the apparition till the mad career suddenly came to an end at the very feet of the Bishop.

“Your dreadful stairs, Sir Roger! I slid down the whole length and landed on the mat!"

But otherwise, it’s rather rough going, as she’s ignored by her dinner companions and becomes the sworn enemy of the dreadful Miss Forbes, who resents Delia for having aroused Sir Roger’s kindness. Not only that, but she finds that high society can sometimes be rather dull:

Delia began to wonder if a Quaker's meeting might not even be livelier than Bertramstone for the younger ladies had all vanished, to drive to the meet, or to hunt, or to walk up to lunch with the shooters; and when Lady Polwhele announced, "Now we will have a nice quiet afternoon and you shall write all my letters for me," Delia felt she might better have been at home.

But she needn’t fear, as her life is about to get quite a lot more exciting. Through a series of utterly implausible yet perfectly entertaining events and more than a few coincidences, Delia’s friendship with Sir Roger sweeps her into international intrigue, complete with Russian princesses, a short stint in a Spanish prison, a near miss of an assassination attempt, and a dramatic rescue from a kidnapping attempt (most of these instigated by none other than the terrible Miss Forbes). Delia, with her practicality, intelligence, and unflappable presence of mind, finds that international intrigue isn’t that much more difficult to handle than managing a household, and Sir Roger, of course, soon finds her irreplaceable.

A Lion, a Mouse, and a Motor-Car is, with a few exceptions, not riotously funny (despite its Beverly Cleary-meets-Narnia title). It’s largely just plain silly. But its daft plot is so surprisingly well-done that it was genuinely difficult to put down, even though I was on our recent little jaunt to Carmel, California and was theoretically supposed to be “doing stuff” instead of “just reading”. (Fortunately Andy knows me better than that.) It’s pure escapism, and though published in 1915, it is set some years earlier to avoid any of the seriousness that World War I would have required.

It’s also terrifically rare, with no copies currently showing on Abe Books or on Bookfinder, so I have to give warm thanks to Kathy Reed, who managed to acquire a copy and was willing to lend it to me by mail. I'm sharing pics here of the lovely book itself, which was apparently presented to the Oxford Union Society by Townshend herself. Having spent its formative years in Oxford, the book now lives in Colorado, to where it has safely winged its way back now, none the worse for a whirlwind vacation in the City by the Bay. 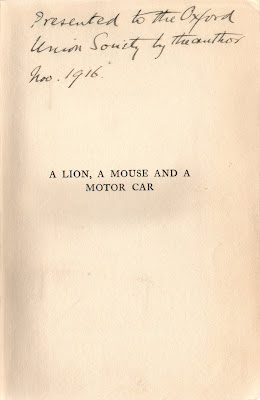 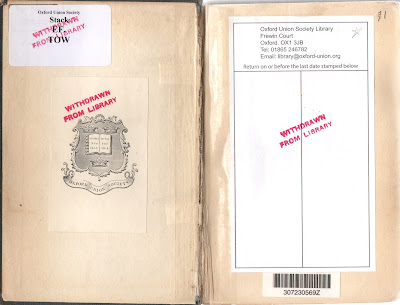 Sadly, Townshend, about whom I know very little, seems to have written nothing else along these lines. She published a few children’s titles, a biography or two, and some historical fiction, but no other “fantasias” (as this book was subtitled). It’s a shame, as I could certainly have done with a few more silly, joyous adventures like this one.

I’ll leave you with a little nugget of wisdom from Sir Roger himself, which struck me as very true, about imagining the situations of others:

“It is a very awkward thing to try to wear our neighbours' shoes. We pity them if we are pinched; it doesn't strike us that the shoes may just fit their own wearers."

Posted by Furrowed Middlebrow at 7:33 AM