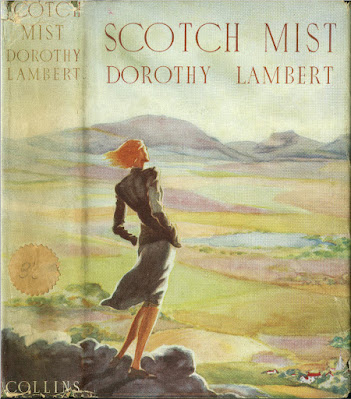 "I'll set my face against all female society, if that will reassure you. But," he added firmly, "Miss Fairlie is different. She'll give us no trouble; you can depend on that, Mrs. McCaig.'

Mrs. McCaig looked at him with withering scorn. "I'm no' so sure. Have a care, Glenlochart."

When Alison Fairlie, on holiday from her decorating job in London, winds up at Glenlochart House, the family home of Neil McPherson, now being run as a quiet hotel primarily for gentlemen fishermen, he assures his surly housekeeper she'll be no bother.

Little does he know.

After a lovely day or two of making Alison fall in love with the house and its environs (and perhaps a little bit with Neil himself), things grow more complicated with the arrival of other guests. Mrs. McCaig refers to 34-year-old Allison as "yon spinster body", but despite her advanced age (!) she quickly attracts the attention of young Roddy Tosh, the appropriately-surnamed, shallow and spoiled son of a wealthy businessman, whom Allison finds ludicrous but entertaining:

She enjoyed him as one enjoys a farce which makes no call on one's intelligence and is an excellent after-dinner entertainment. She placed him in the same category as a performing seal, and threw him encouraging remarks as if she were throwing small fish to a seal.

Roddy's attentions lead to misunderstandings, but this is nothing compared to the chaos which ensues with the arrival of Alison's freeloading mother, a distressed (and utterly selfish) gentlewoman, who takes regular advantage of the proceeds from Alison actually working for a living, and her sister, an irresponsible flirt who has had to cancel a planned cruise with friends due to an exposure to measles.

Before long, Neil is regretting ever having had the idea of a hotel to save his family home:

"The sooner every one clears out and I have my house to myself, the better pleased I'll be; and let me tell you, it's my last effort at running a hotel. I'm through! A hotel is all very well, but I didn't bargain to find myself running a lunatic asylum."

Naturally, it all works out in the end (though one might quibble with one of the matches made—on the other hand, it might be a dodged bullet for the young man who is passed over).

Although Dorothy Lambert was clearly marketed as an author of "romances", and I suppose in many ways that’s an accurate classification, her novels are always more than mere love stories. Witty and well-characterized, peopled with both the admirable and the gloriously irresponsible, they tend, at their best, to be rollicking good times, hard to put down and wholly escapist in theme. You won't have any profound philosophical epiphanies reading Scotch Mist, and it doesn't offer a design for living, but it just might inspire a trip to Scotland, or at least allow the armchair traveler to enjoy some really luscious scenery. Have a gander at this, for example:

He wished Alison were with him to appreciate the loveliness of the morning light over the panorama of mountains, the blueness of the hills, the freshness of the birch woods in the sunshine, the gleam of silver where the loch sparkled in a setting of dark pines, the purple shadows where the big, slowly-piling clouds passed across the sun. The nearer hills were very stark and rugged in the bright light; every water-course was scarred on their steep sides, and the big rocks stood out clear against the skyline. The whaups swooped overhead, uttering their weird calls, and the air was fresh on the wide moor. The silence was immense, although it was actually full of noises. The larks' song, when one listened, filled the air; the bees hummed over the broom that grew in golden masses on the hillside above the road; the sheep bleated in the pastures and where they roamed the moor. The murmur of falling water in a deep glen added to the various mountain sounds that were all part of the silence of the high moors and mountainy country that spread in every direction as far as the eye could see.

Scotch Mist was just the kind of read I needed recently, when the weather in San Francisco was grey and my mood was a little overcast too. And it has reminded me that (thanks to Grant Hurlock, for the umpteenth time) I still have some other Lambert novels to explore.

During the black hole last year and early this year when I was barely capable of blogging (to the extent that I ever am), I actually read two other Lamberts—Emergency Exit (1937) and Travelling Light (1935). The former was an absolutely daft but quite enjoyable crime farce set in Cornwall, and the latter was a charming romantic comedy about a young woman on a driving holiday in Ireland. I'm wishing now I had made more thorough notes about those. Much Dithering, Lambert's thoroughly delightful village comedy from 1938, which we reprinted last year, may well be the pick of the litter so far, but Scotch Mist has made me realize that other treasures may still lurk…

Posted by Furrowed Middlebrow at 5:54 AM