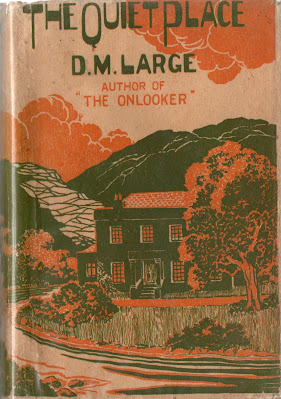 In the sunlit stillness of early October the four people referred to by Peter Casey as 'them evacuants' hung their respirators out of sight, and settled down thankfully. Allowing the peace of the Irish country-side to dim the memories of hectic months spent in a country first preparing for, then actually at war.

In the days not long after World War II begins in earnest, Maggie and Catharine O'Hara agree, at their young niece Kitty's urging, to take boarders at their family home, Moyle House, in the countryside of neutral Ireland--the "quiet place" of the novel's title. They immediately attract four guests: Miss Gordon, an elderly Scottish gentlewoman fresh from a dramatic week of air raids in Edinburgh; Mrs Gilbert, an Englishwoman with "uneasy nerves" who has hastily left her home at the threat of "evacuated slum children"; Miss Fenton, a wealthy woman from Birmingham, who arrives with her dachshund "Blotto" (concealing that his real name is "Otto", which sounds too distressingly German); and Richard Wade, a WWI veteran, born to Irish parents but a Londoner for many years, who has been debarred from military service this time around due to poor eyesight.

Rounding out the main cast are the cook, the maid, and the gardener/handyman, all of whom speak in dialect, of course, stereotypically (but often quite amusingly), and all of whom tend to get hysterical or flustered and need to be talked down from the ledge by their self-possessed, rational betters.

The plot--if such this book can be said to have--consists of the events of the following year, as the war begins to make itself felt even in neutral Ireland. A good condescending contemporary review is always entertaining, and of The Quiet Place the Observer review said it "suffers from being, as Matthew Arnold called Coventry Patmore, 'worthy but mildish.' There is some agreeable Irish talk; a German airman crashes; a little romance is achieved; and that is all." And it would be difficult to disagree with this, except that the reviewer seems to feel that it's a bad thing, while I do not.

Along with the hosts and guests, we experience the assembly of a bomb shelter (complete with Mrs Gilbert's footprints in the concrete as she dashes into it in panic at a passing airplane). We make an uncomfortable but enjoyable trip to the local cinema, a rather more eventful jaunt to Dublin, and a very muddy excursion to an Agriculture Show. There's an uncharacteristic freeze which allows for ice skating on the nearby lake (Richard writes to London for his skates and they arrive unusually fast, with a note from the Customs officer: 'These should be dutiable by right, but it's a long time since we had any skating here.'). And there's Maggie's ill-fated attempt at a substitute for Mrs Gilbert's doctor's prescription that the Swiss Alps, with the sound of cowbells in the background, would be the ideal cure for her nerves--she asks Peter to attach one to their dairy cow, an experiment that nearly finishes the poor woman off.

Oh, and yes, "a little romance is achieved".

But this doesn't get across how funny and genuine the book is, and how warm-hearted it manages to be without being cloyingly sweet or preachy. It's rather episodic, which can sometimes make a book less enjoyable to me--too easy to put down--but I found that even without any major dramatic events to connect the chapters, I still kept plunging eagerly ahead.

It's often very funny, though usually in a fairly quiet way, as when Mrs Gilbert takes a summer holiday to a "hydro" where the patients' frequent discussions of their health symptoms are "known to the sceptical office clerk as 'organ recitals'", or with Peter's theories about Hitler and wallpapering:

'It dhropped down upon me in actual fes-toons,' he told Delia afterwards, 'accordin' as I'd get it up; an' whenever I hear people mockin' Hickler for bein' a paper-hanger, I always says to meself, that's mebbe what has him as smart as he is, for anny man that can paste up ceilin' paper would baulk at nothin'.'

It's also quite fascinating and, at time, poignant to get a uniquely Irish perspective on the early days of the war. For instance, the qualifications of a local member of the Home Guard:

The Sergeant was deeply interested in the shelter and, because of his official standing, was rather inclined to steal the postman's thunder, as it were. Not that Sergeant Doyle had any experience of aerial warfare, or even of sandbags. On the run with the Republican Army years before, he had passed through many vicissitudes among the hills and bogs of his native land, but aeroplanes had not come into the picture at all. This outlaw experience seemed to act as a recommendation for service in the Civic Guards, where his promotion was rapid, and where he now put down all lawlessness with a heavy hand...

I should note that Maggie and Catharine are firm supporters of the Union, so the novel has a pro-English slant, though it's also permeated with a genuine love of Ireland as a whole, and Mrs Gilbert's struggles to understand the Irish sense of humor, and her careful avoidance of any mention of IRA bombs (only to find the Irish themselves constantly discuss them), allows Large to explain some elements of the conflict to non-Irish readers. At one point, Catharine reminisces about a trip to the Scottish Highlands, during which she was followed around by police due to her Irish accent. And there are occasional mentions of the interconnectedness, despite Ireland's official neutrality, of both countries:

Here and there through the country Red Cross depots were established in the huge drawing-rooms of mansions that had survived the 'bad times' in Ireland. But there was no official recognition of the fact that many Irish women knitted and sewed almost continuously for the British forces, among whom were men from their own country-side.

There was one bit of presumably Anglo-Irish humor that completely escaped me though. Perhaps you brilliant people will be able to enlighten me. There are several mentions of Irish folk speaking of invaders, ''whoever they happen to be", which confuses Mrs Gilbert:

She stirred her coffee slowly: 'Delia says that too,' she went on, 'and Mrs. Walsh: whenever they speak about invaders they say, ''whoever they happen to be," as if they were not quite sure who the enemy really is."

She turned to Richard Wade as the only man present, and therefore the person most likely to know; for Mrs. Gilbert was no Suffragette, and in her opinion men knew more about such things.

But he looked helplessly at the younger Miss O'Hara, and saw in her dancing eyes a full realization of the extreme difficulty of his position. How could he tell this Englishwoman that many of the people of Eire half hoped that the invaders might happen to be Ulster men from across the hated Border.

At any rate, the evacuees' year ends on a slightly somber note, as first a local, returned from time in England, carefully talks around some of the realities of what he's witnessed, and then soon after a Nazi bomber circles and then crashes in the field (don't worry, the cows are alright!). We know that even Moyle can't stay a "quiet place" forever, and I love that Large, even while writing what is clearly in many ways a "cozy" novel, didn't shy away from the darker elements affecting so many lives elsewhere.

Mostly, though, I just love Large's sensibility as a whole. One can't help but feel that the author probably shares Miss Maggie's perspective on what's most important, glimpsed when she and Miss Gordon take a holiday to one of Miss Maggie's favorite beauty spots:

The White House stood on the cliff, high above the tiny harbour and the great semicircle of firm, burnished sand with its rear-guard of pale sand hills, and its edging of snowy foam where the slow waves broke with a muffled, crashing sound. The nearest island was so green that most people who saw it for the first time on such a day blinked, then looked at it again. The grey walls of its small ruined church called across the narrow stretch of water to the archaeologist in Miss Gordon's makeup, and, as she discovered later, they called to antiquarians from near and far.

But not to Miss Maggie O'Hara, whose interest centred in the people of her country rather than in its antiquities; who had once disgraced herself by gathering mushrooms in a certain field without noticing the presence there of two pillar stones. If she had seen them she would probably have thought of them only as delightful scratching posts for the sheep.

I'm perhaps somewhere between the two extremes. At any rate, though, I can report, likely to no one's surprise, that I've already ordered two more of Large's novels from earlier in the 1930s. Alas, one other, at least, The Onlooker, doesn't seem to be available for love or money, but at least Cloonagh (1932) and The Open Arms (1933) will keep me busy in the short term!
Posted by Furrowed Middlebrow at 8:33 AM