"Short of locking up her sons": VIOLET TREFUSIS, Pirates at Play (1950) 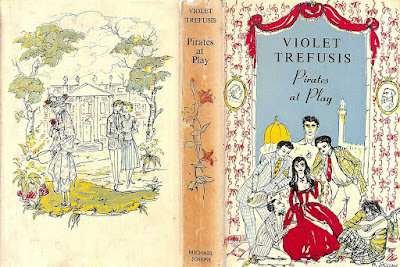 Elizabeth suddenly stepped out of the train, unorthodox, hatless, her golden hair like a nimbus about her head. Vica and Guido gave an involuntary gasp as the light fell full on her face, but whereas theirs was sheer gratification, Mamma's gasp, on the other hand, was one of sheer dismay. Short of locking up her sons ...

Lady Canterdown (family name Caracole, pronounced "crackle") has determined to send her lovely daughter Elizabeth to Florence to expand her horizons, despite the valid concerns of Lord Canterdown:

'Well, look what happens to Liza in Taunton, let alone Florence! The other day I left her sitting in the car when I went into the Bank. What did I find when I came out? Two strange young men under the car, which had nothing whatever the matter with it, and a third lighting her cigarette. She's a public nuisance, is our Liz.' He chuckled proudly as he stuffed his pipe.

Lady Canterdown's old friend, the Princess Arrivamale, has recommended the home of the Count and Countess Papagalli (such dignified designation being given him because he has the distinction of being the Pope's dentist). The Count and Countess have one daughter, the dark, gorgeous Vica (surely it's pure coincidence that her name is only one letter off from "Vita" and her description fits Vita Sackville-West to a T), and five brothers, each more lovely than the next except for poor Amerigo, who because he's shorter than his beautiful brothers gets labeled a "dwarf" and compensates by playing the clown (Amerigo's treatment by his family is jarring, but Elizabeth is charmed by him and other characters point out the success that petite men of the past have had with women, so all is not lost for him). 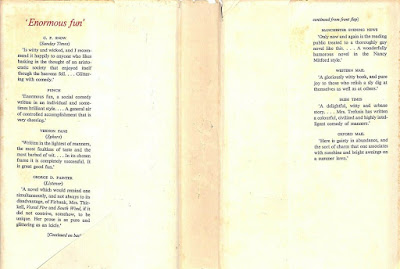 Elizabeth sets off and immediately conquers Florence, and when news arrives back home that she has, predictably, become engaged to an Italian, her handsome brother Charles follows, and himself gets entangled. Thus, in typical Violet Trefusis fashion, what we have is the coming together, in daft but glamorous fashion, of two luxuriantly beautiful families.

Pirates at Play has some of the usual flaws of Trefusis' rough-and-ready novelistic style. She challenged herself here with a few more characters than she could effectively manage, so some flipping back and forth was necessary for me to remember who was who. She sometimes describes in amusing detail characters who then barely appear in the rest of the novel—see for example the long but entertaining digressions on the Caracoles' "Madamzell" and Valka, the Princess's companion, despite the fact that they really don't figure in the plot, and a similar dramatic (and hilarious) impression made by the servant Bandini, whose dislike of Valka goes beyond the pale:

Bandini gave her a look which could have caused any less leathery heart to quail. He loathed Valka with a sinister subterranean loathing, as unventilated as the catacombs, but none the less deadly. He was a Neapolitan, and many were the secret devices he employed to bring Valka to a really sticky end. He had examined all of them, but had a sustained penchant for leprosy. He had in his possession a rag, which, he had been assured, had formed part of a leper's clothing and which was powerless to convey the disease to anyone but the appointed victim. Many's the time it had been pressed into Valka's hand, when she had asked for something 'to clean her odds and ends with.' He could wish the effects were a little more expeditious, ma pazienza! That innocent-looking blister on her fourth finger, for instance? He couldn't take his eyes off it.

And then he more or less vanishes from the remainder of the novel.

There are some predictable references here, as mentioned in my review of her earlier novel Tandem, of "dagos", but since Trefusis' sympathies clearly lie with her eccentric Italians, I wasn't terribly bothered by that. There's sadly a use of the "n" word too. And there is a distressing reference to the Princess's husband's apparently nearly pedophilic preference for very young girls. It's impossible to tell just how young we're talking about, as the Princess is an older woman so by "mere children" she could well mean 20-year-olds, but at any rate the Prince's predatory behavior is unlikely to provoke the giggles today it must have been intended to provoke in 1950. 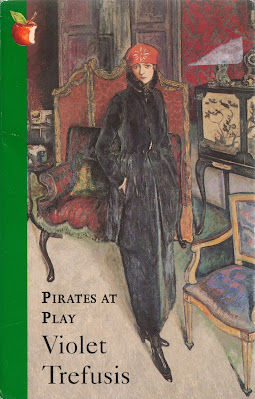 But Violet makes up for these weaknesses with her usual flair for description and for characterization, and her delightful sense of humor, particularly where it comes to sex and romance. Elizabeth's Italian fiancé, for example, speculating about what she will expect of him in terms of fidelity:

Even now, he didn't know quite how he stood with her, how much she was a victim of her youth, Italy, the spring? He had kissed her more than once; skilfully, not too passionately. She had appeared to like it, but that was nothing to go by, he had kissed dozens of English girls. they had all liked it, and had seemed to attach little or no importance to the gesture. Where did they consider love-making began and flirtation ceased? How much passion was compatible with matrimony? How long would Elizabeth expect him to remain faithful to her?

And there's the tale of the Caracoles' Aunt Sybil, which highlights the hypocrisy of the family's traditional morality:

'Well, she's had as many lovers as anyone in Italy, I should think, though she did wait until she was thirty, before she started: she said she was willing to give respectability a chance. But none of the chaps she fancied proposed, so, on her thirtieth birthday, she gave a party, in the course of which she announced that she was about to take a lover, so that the members of her family who proposed to cut her should know exactly where they stood. Since then, she has never looked back. Apparently the chaps who did not fancy her as a wife were mad keen to have her as a mistress. The family was shocked at first, then, they shut their eyes, Aunt Syb gave such amusing dinners, to which people literally fought to be invited. Besides, her lovers were always jolly distinguished - one was a Prime Minister - in the end the family decided it was an honour to be related to Aunt Sybil.'

This novel and Hunt the Slipper (1937) were the Trefusis novels chosen for reprinting by Virago in the 1980s and 1990s, though by my count Violet's earlier Echo and Tandem are just as good (and the latter possibly better). Despite its idiosyncrasies though, Pirates at Play was a delightful frolic for me. If you're willing to just go with its flow, not worry too much about some occasional confusion, and bask in the glow of Violet's eccentric characters and turns of phrase, you'll likely find yourself savoring a sparkling, vivid Florence that you've certainly never visited yourself, however much time you may have spent in the earthly city of the same name.

I still have three more of Violet's novels in English to be getting on with, so I'll be boring you more about her soon enough...

Posted by Furrowed Middlebrow at 2:28 PM