"My postwar face": MONICA STIRLING, Ladies with a Unicorn (1953) 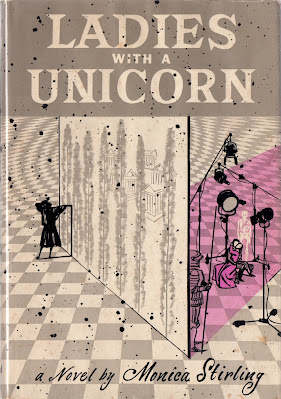 "And then I was in love with Franchot Tone. I wrote to him and he sent me a signed photograph. Of course, I must say I'd enclosed a stamp. I can't tell you what looking at that photograph did for me. Then later on there was a boy at our A.R.P. post who was awfully witty if one hadn't read Oscar Wilde. But the first time he kissed me was a shocking disillusion. Not at all what Franchot Tone had led me to expect.''

Peggy obviously shot out this nonsense rather as a pursued octopus shoots out protective fluid.

Yes, I'm continuing my Monica Stirling odyssey, this time with one of her most successful and well-received novels, set amidst the glamour of the 1950s movie industry in Rome. Here we meet four women, three "of a certain age", all bearing in one way or the other the scars of World War II, and one a lovely young starlet of 18, soon to star in the latest film by Count Anton-Giulio Sarmento, who, though he barely appears on stage in the novel, is undoubtedly its main character (and the unicorn of the title).

The novel is narrated by Françoise Joubert, an award-winning composer of music for Anton-Giulio's films. Widow of a Resistance fighter, and once a bright young thing herself, Françoise is now constantly aware of her stiff, unemotional face—her "mask"—the result of multiple plastic surgeries following horrific injuries in an air raid. Her telling of the story of a few months in Rome is wry and wise, though perhaps neither so wry or wise about the feelings she hides from herself.

The novel opens with Françoise contacted out of the blue by Peggy Latour, a beautiful former schoolmate who was never really a friend, but who wants to use their connection to get close to Anton-Giulio:

But as the steaming day slowly came to the boil I was gradually overcome by the masochism that obliges me to confront prewar acquaintances with my postwar face.

Peggy is entertaining but shallow, unsatisfied in her marriage to a wealthy Frenchman whose real life has turned out to be far tamer than their wartime experiences together. He spoils her, however, and allows her free use of his money, and she has decided that by financing Anton-Giulio's next film her life will become rather more eventful. She has also come under the influence of Princess Valeria Girafalcone, a cousin of the film director and a flamboyant "grande-dame" who believes that all women should be practically obligated to have lovers and lead decadent lifestyles. 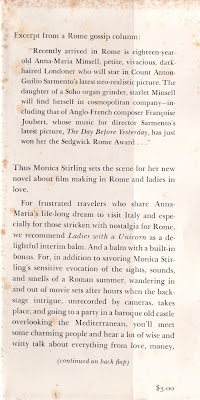 Françoise in turn soon meets and befriends the lovely, naive Anna-Maria Minsell, the unknown daughter of a Soho organ grinder who will star in Count Anton-Giulio's latest film. The four women interact in various ways, with varying degrees of friendship, jealousy, resentment, and protectiveness, and most often on the topic of Anton-Giulio himself, toward whom each feels possessive and romantic, until finally, in the end, we find which way the wind is blowing from that quarter.

And that's that really. In some ways, it's the fluffiest, frothiest of novels, revealed almost entirely in dialogue—rather like Ivy Compton-Burnett adapted by Vincente Minelli. When I first read it, I thought the novel was irresistibly charming and entertaining but ultimately just a bit of romantic fluff. But when I started going back over it, reviewing the passages I'd marked and the notes I'd made, I realized yet again that Stirling is more subtle than I'd given her credit for. War and Peace this most definitely is not, but as in The Boy in Blue, which I reviewed a while back, it offers some surprisingly powerful juxtapositions between the glamour and frivolity of the characters' present and the traumas of the past. Françoise's frozen, emotionless face may be the central symbol, but there is also, quite strikingly, the scene in which Anton Giulio takes Anna-Maria for a drive along the Appian Way, telling her about the film industry's exciting history and its scandals:

And then they reached the Ardeatine Caves and Anton Giulio forgot the cinema.

This was the place where only a few years ago, well within Anna-Maria's present stretch of memory, the Nazis brought three hundred and twenty-two Roman hostages, kidnapped at random, to be packed into the caves and shot and left, the whole and the maimed mixed in a bleeding shambles, to gasp and die in blackness behind the hastily sealed entrances.

Whew! A real event, by the way, not fiction.

And even in the first conversation between Peggy and Françoise, we get some vivid details of wartime France (perhaps from Monica Stirling's own recollections), a war that ended less than a decade before:

I remembered the sunlit summer of 1940, the crowds rushing from Paris, as from a fire, to join the snake-like lines of mattress-topped cars that drove slow, slower and slowest of all just before their closely packed passengers scattered into ditches where the dive bombers still found them. I remembered Nice with its sea and sky and palm trees still as bright as new travel posters and its sidewalks crowded with the most typical of twentieth-century tourists: displaced persons. I remembered the sensation of living in a dull fear-encircled vacuum and the incredulous joy with which I greeted my husband when he arrived hollow-eyed from his narrow escape and long hitch-hike across two countries. I remembered Lyons in the unheated winters, the wind scything between the cliff-like gray houses and inserting itself into the city's labyrinth of passageways. I remembered the turnip meals, the recurrent colds and chilblains, the disinclination to wash in icy water, the sordid temporary lodgings and false identity cards, the drearily uncomfortable atmosphere, and the exhilarating meetings with friends who had also escaped arrest. And then I remembered my husband's arrest and the nightmare that followed.

Admittedly, for some the style, relying so much on conversations between the women and on recollections of the past, might feel too uneventful, but ultimately I found it a rather poignant, delicate concoction, like a hothouse flower in perfect but slightly ominous bloom, and I have to say it is now my favorite of Stirling's novels.

I now have only two Stirling novels left—Some Darling Folly, reputed to be, like Ladies and Boy in Blue, among her best, and Sigh for a Strange Land, about refugees from unrest in Eastern Europe (presumably the Communists cracking down there in the 1950s, though the precise location doesn't seem to be revealed). There's also one more story collection, Adventurers Please Abstain, which if it lives up to her other collection will be special indeed. I have qualms about finishing with her work, as she has been such a special discovery for me, but how can I resist?
Posted by Furrowed Middlebrow at 7:31 AM