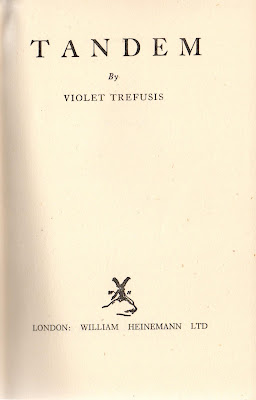 The charming family was dressed in every hue under the sun, but they were so small they could not look vulgar, any more than birds of the Isles look vulgar. At a distance they all looked the same, but some were prettier than others. The mother was ravishing, for instance, with eyes that took your breath away; so large and exotic were they. You thought: Oh! Poor things! How will they ever get through the winter? And the pathos of the entire family struck you. It was like watching a migration across an autumn sky.

Having happened across Echo, the second novel by Violet Trefusis, a few weeks back (review here), I seem to have been fated to explore her work further. A recent thrift store trawl resulted in my acquisition of the bio of her by John Phillips and Philippe Jullian, as well as a volume of her letters to Vita Sackville-West. A long-intended ILL finally resulted in me getting hold of this, her third and perhaps rarest novel (perhaps best too, but let me ramble a bit before I get to that). And getting swept along by kismet, I then picked up from the library Diana Souhami's dual bio of Trefusis and her mother, Mrs Keppel and Her Daughter, which, being by Souhami, will undoubtedly be superb.

Tandem was the first of Violet's novels in English--living in France for much of her life, she wrote four of her eight novels in her adopted language. It focuses on two sisters in a family of Greek origin but living in France, and according to Trefusis' ODNB entry by Clare L. Taylor, the sisters may have been inspired by Violet's friends, Anna de Noailles and Princesse Marthe Bibesco, also novelists (Taylor refers to them as sisters, but they seem in fact to have been cousins, if Wikipedia can be believed). 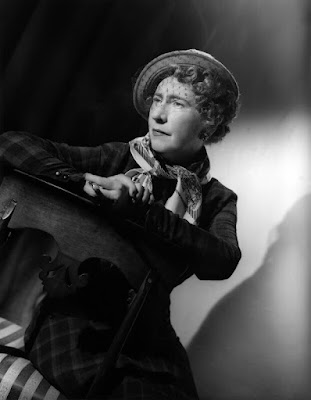 The novel opens in 1892 with Pénélope and Iréne, as young girls, discovering, with their widowed mother Madame Demetriades, the Villa Ivanhoe in rural France (observed in their arrival, in the passage above, by the villa's gardener), into which they soon move. We see a bit of their childhood--Pénélope clever and charismatic, Iréne less brilliant and self-assured but possessing her own charms--and we meet their older sister Marguerite, who "looms like a monolith" next to her petite, pretty sisters and mother and who garners little attention (she's soon married off to a politician and scarcely appears again, poor thing). And there's also Tante Eugénie, really only a distant cousin, but "majestic" and "stately" as well as wise and formidable, too important in their lives not to be an aunt, and her "irresponsible, impish, brilliant, incorrigible" husband Alexis, whom the girls adore.

We soon leap forward to 1900, when Madame Demetriades is the host of an exclusive salon in Paris, which boasts among its attendees the likes of Claude Debussy and a young Marcel Proust. The Dreyfus Affair is raging, and is one of the most impassioned topics of discussion. During this social whirl, Pénélope and Iréne soon make illustrious aristocratic marriages, and in the subsequent sections of the novel, we follow each into her married life.

Pénélope, already a bestseller with her debut novel, marries Sosthène de Mayeuvre-Chanville, second son of a duke, a dull but stabilizing influence with a challenging mother. She also develops a rather surprising attachment to his brother Chrétien d'Acre, whose reputation as a womanizer and cultural Neanderthal she unexpectedly discovers is a plot to allow him to be left in peace by his family. They live initially at Palombre, the family estate, but soon Pénélope spends most of her time in Paris, becoming a cultural icon with a considerable reputation as a lover, though the reality is rather less romantic. 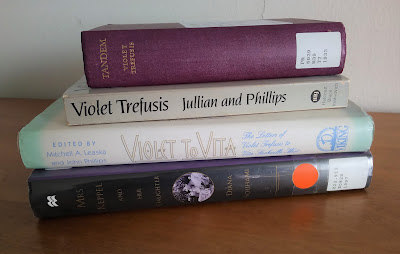 Iréne, in a rather parallel development, marries English nobleman Francis Gottingale and lives with him on his family estate, the wonderfully named Test, along with Francis' rather awful cousin Nancy and his grandfather, the temperamental octogenarian Old Nick, who only speaks to his family via his beloved cats. Iréne's familial temptation comes in the form of cousin Gervase, but she suppresses her feelings for the good of all.

In the shorter final sections, one sister will perish and the other will survive well into the mid-20th century, into an imagined future lacking World War II but including, by the 1960s, helicoptor taxis to whisk one to one's destination. Perhaps just as well that there's little of that sort of speculation...

There is little enough plot beyond the sisters' development and the compare-and-contrast of their respective lives in England and France. But oh, what a thoroughly fun, glamorous read it is! It drags just slightly in the middle when Iréne's early days at Test are told via letters and diaries, with a little to much focus on broad and rather dull generalizations about the English. But Trefusis soon hits her stride again, and I just ate it all up. 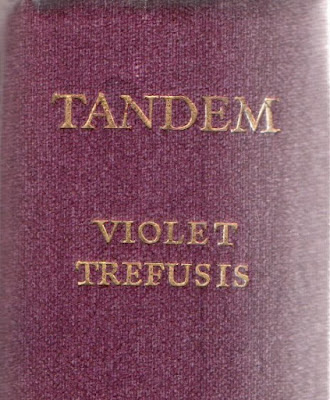 If Trefusis is not a great writer in terms of plotting and profound significance, she certainly is great in other ways--in vividly evoking a place and time, and in lush, clever descriptions and unexpected metaphors. And she certainly knew the Paris she describes so vividly, so it's worth reading Tandem just for the vicarious travels it offers the reader. Here's our first description of the city in 1900:

It was freezing. People's noses were like irrelevant red berries stuck between their pasty cheeks. Ladies vainly endeavoured to protect their complexions by holding their muffs up to their faces as they hurried along the Quais, where the wind was at its most merciless, while the tassels on the plane trees made one think of desiccated cherries. … The men in charge of the bookstalls beat themselves despondently, hopping first on one foot, then on the other; they had done practically no business for several days. One bookstall with nothing but daffodil-yellow bindings made a patch of false spring in the universal greyness. Notre-Dame loomed across the river, its flying buttresses spread with the rhythm and symmetry of perfectly timed oars. The Seine rolled swollen waters round the great cathedral; into what massive Northern myth could this not be twisted, in which goddess turned to stone and god to river? All this majesty was pecked at, mocked, interpolated from the opposite side of the Seine, where the bird-fanciers confronted the booksellers with their twittering wares. Cage upon cage was stacked in front of each doorway, beginning with homely hens and mounting skyward with such birds as starlings, Australian thrushes, cardinals, to end in a piercing treble of parakeet and Java sparrows.

And for those who love fashion or decor, here's a description of Madame Demetriades' Paris salon:

She had had recourse to one of the pioneers of the Modern Style, recently imported from England, for the decoration of her salon. It was accordingly painted a swooning green and was surmounted by a turquoise blue frieze, against which the celebrated William Morris peacocks disported themselves. From every doorpost, dado, cornice, the straight line had been triumphantly banished, the vegetable kingdom with its undulations and fluencies had been the sole inspiration of this tentacular room in which everything drooped, writhed or clung--chiefly clung. The door was framed by two gigantic lilies; one sat on cyclamens upheld by wrought-iron stalks; tables shaped like water-lilies bore cups shaped like smaller lilies; lofty lamps wearing colossal shades, said to resemble sea anemones, lit up etchings by Helleu, Seymour Haden or Whistler. The mantelpiece was in white and yellow tiles, and the irresponsible flames reflected themselves in brass bellows, poker and tongs, masquerading as iris, sunflower and dahlia.

Trefusis also has a playful sense of humor, as in Iréne's description of unflappable Brits:

They relate the most extraordinary occurrences as though they were quite natural; for example: Lady B., the mother of three daughters, the eldest of whom is just "coming out," attends lectures on Buddhism by a hypnotic Hindu, she decides to join the Hinda and be converted to Buddhism. One morning Lord B. finds on his writing-table a letter, brief but to the point: "I have gone to join Buddha. Farewell for ever." "Who the devil is Buddha?" is Lord B.'s only comment. The audience looked by no means impressed. One lady remarked: "Very hard on Angela, just as she's coming out. Who is going to take her to balls, I wonder?"

The description of the decline of the Villa Ivanhoe's original owner is also poignantly hilarious:

The years passed. Madame de Monblason cannot be said to have died. She drooped, she wilted, she lost her petals one by one; then one day her heart politely stopped beating.

This is a novel I'll return to now and again just to savor its elegant escapism. And of course, in keeping with my particularly OCD personality of late, I now have Trefusis's four other novels available in English (two of the French ones have never been translated, drat it!) lined up for reading soon. Broderie Anglaise has maintained a certain level of fame as Trefusis' version of the famous love triangle with Vita Sackville-West and Virginia Woolf. Hunt the Slipper and Pirates at Play were both reprinted by Virago at one time. And finally, no idea what to expect from her final novel, From Dusk to Dawn, an aristocratic farce written when Trefusis was dying, to distract her from the pain she was experiencing. So, undoubtedly more to come!
Posted by Furrowed Middlebrow at 11:18 PM