"No memories are clearer ... than those one has invented": MONICA STIRLING, The Sniper in the Heart (1960) 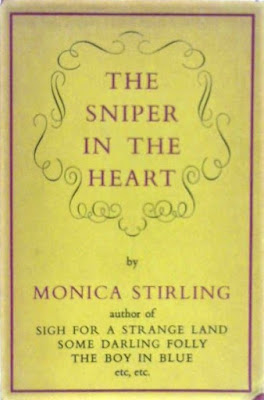 Presently I said, "Now what do we do?" As I did so a memory stirred in me: a black-overalled school-girl, I was arguing with other black-overalled schoolgirls about love. Suppose you loved someone who killed someone what would you do? Despite the religious scruples supposed to burden us, the most common answer was help him hide the body. I hadn't imagined I would ever be given a chance to test this. Like many fairy tales, it proved true.

Here I am, continuing my Monica Stirling odyssey (see previous posts here). This is the sixth of her books I've reviewed here, the fifth novel (the seventh she published, out of eight), so forgive me if you're getting bored, but I am deep in my infatuation.

This one seems a bit of an enigma in her body of work. She was perhaps channeling Graham Greene a bit, creating a love story / semi-thriller set in an unspecified Latin American country in the throes of revolution. Vittoria is a young Italian photographer who gravitates to the world's trouble spots, snapping photos to sell to various news magazines. As a result of this, we get occasional bits of jaded dialogue along these lines:

"I've never been here before", I whispered, "yet it seems familiar."

"Weren't you here for the last revolution?"

"No. That was the year I was in Indo-China."

She arrives in this unstable country and encounters a man from her past--Manolo, a wartime resistance fighter she idolized in her childhood, who also happens to have been the lover of her grandmother, the bold, dynamic woman who raised Vittoria after her mother's early death. She remembers--or, as it emerges, misremembers--him vividly, and they fall instantly and torridly in love (I know, I know). Manolo is involved with gunrunning, and Vittoria gets swept up as well. There is some Didion-esque commentary on U.S. and other international involvement in the revolution, and some danger, suspense, and tragedy.

Implausible as this love story might be (not to mention unsavory, with Manolo now in love with the granddaughter of his ex-lover, whom he once helped with her homework...), it does give Stirling the opportunity to explore one of her favorite themes--the ways in which we're haunted by our memories, accurate or not, à la Patrick Modiano. A central example, from which the novel's title is taken, is the firm memory Vittoria has always had of Manolo telling of his childhood, selling lottery tickets in a cemetery. But no, in fact:

"Paquito, the boy who sold lottery tickets in a cemetery, was a character in a film."

You must have heard me describing it to Isabella one evening late, when you were half asleep on that little stool of yours."

"What was it called?"

"The Sniper in the Heart."

Similarly, his bricklayer father turns out to have been someone else entirely:

I had not thought of Giuseppe for years: one of the night people, young and burly, constantly worrying about his wife, who was pregnant and longed for anchovies with peppers. Before the war Giuseppe had been a bricklayer. Dismissing a picture of Manolo's father with a trowel in his hand, I accepted the fact that no memories are clearer, more vividly coloured, than those one has invented.

One feels that the whole romantic element of the novel was constructed to allow Stirling to examine how Vittoria gets caught up in the limbo between her childhood adoration of Manolo and her actual affair with him as an adult. And if only she had come up with a less distressing history for the pair than his affair with her grandmother and helping with her homework!

The novel as a whole, too, is outside of what seems for me to be Stirling's most brilliant skill--sophisticated European glamour haunted by the traumas of war. It's well done, of course, as Stirling is nothing if not an elegant, intelligent writer. But it ends up not completely working either as a glamorous romance (a revolutionary capital is not Paris and the romance is a bit creepy) nor as a thriller (the details too vague, the story too short and simple to really develop tension) nor even as a character study (neither romantic lead is very compelling or fascinating, and we're lacking the vivid supporting actors who usually strengthen her novels).

What raises Sniper at least a bit above a mere unsuccessful experiment, however, is as usual Stirling's extraordinary perceptiveness and the sense that, even if she's not always perfect in telling her story, it comes from her own passionately lived experience. I can hardly speculate as to whether Stirling herself ever actually participated in gunrunning in Latin America, but based on this novel I wouldn't dare bet against it, so vividly does she portray the thoughts and anxieties involved:

Moonlight picked out the barrels of their revolvers. I felt rather as I had once done in Africa, in an aeroplane clearly about to make a crash landing on to an exiguous jungle air strip: a moment's internal panic, then a complete lull of all emotions, followed by acknowledgement, curiously dull and unsurprised, of the fact that here, here and now, was the exit towards which we are all travelling.

And one is indeed rather curious from what personal knowledge Stirling wrote the paragraph which opens this post!

I wrote last time about the somewhat excruciating love scenes in Stirling's debut novel, Lovers Aren't Company, and I have to say that I still think she's not at her best writing love scenes (at least not sincere ones--those based, perhaps, on her own experiences?), but I should also acknowledge that with the significant caveat of the lovers' past history, she has at least improved significantly here:

Neither Manolo nor I gave a thought to the song's hero, the young man strait-jacketed by a uniform, dragged from home, hungry for love even in the guise of Lili Marlene. Long ago we had thought of him; now we thought only of long ago. Attentively impervious to the music, our minds were invaded by sounds long silent, military boots clumping over cobbled streets, words like the barking of dogs, schnell, achtung, verboten; by lights long extinguished, rays from military torches reaching, like God's finger in old engravings, after fugitives tumbling across the coffee or rose-coloured tiles of rooftops where lines of washing offered ghostly company; by civilian glances long vanished, the welcome in Isabella's face as she turned to greet Manolo, her eyes still young enough to be incandescent, the gentleness in his as he stood, a hand on my shoulder, helping with my homework.

"Long ago we had thought of him; now we thought only of long ago." That's pretty darn good, you must admit.

As a now-devoted Stirling fan, I found The Sniper in the Heart occasionally poignant, good fun and fairly addictive reading, but it's by no means the highwater mark of her work, at least as far as I'm concerned. However, of the three novels I have left to review, two of them seem to be right square in the middle of her wheelhouse--sophisticated tales of postwar Europe--so expect more high points to come. I also have another story collection to go, Adventurers Please Abstain, which could be a treasure itself. Looking forward to sharing them all with you, though I am also now beginning to have the anxiety and melancholy I always feel when I approach the end of a first read of a favorite author's work. As Kate Bush would say, oh the thrill and the hurting...
Posted by Furrowed Middlebrow at 2:22 PM