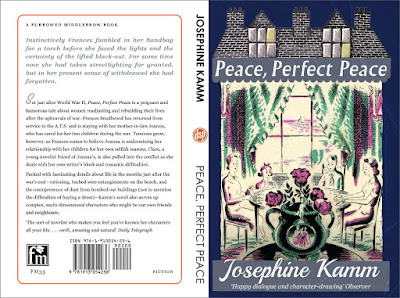 From Eileen Kamm's wonderfully informative introduction to her mother-in-law's novel:

She lived in London all her days, fascinated by the interactions of city life, talking to her friends and to strangers she met at the bus stop, and relishing the sense, during the period before and after the second World War, of living at the hub of crucial events and witnessing social upheavals unimaginable in the rather staid world into which she had been born. Although the 1930s, when she did voluntary work with Jewish refugees and became aware that religious persecution was not consigned to history nor Britain immune from invasion, were an unsettling decade, it was in her nature to get on with things. When war broke out in 1939 she joined the Ministry of Information as a senior officer and pamphlet writer and had her flat bombed, as well as publishing several novels for adults, of which Peace, Perfect Peace was penultimate.

I noted in my review of the novel here how invaluable it is as a detailed record of life in the immediate postwar period, and Eileen expresses that far more eloquently than I did:

The close examination of what mercifully was to prove a temporary world, with its clothing coupons, communal soup kitchens euphemistically rebranded as ‘British Restaurants’, trains crowded with homecoming soldiers and people tired yet optimistic of better times to come, is sometimes poignant, and often wryly comic. It is history to us, but written without the distorted nostalgia of distant memory. What we hear in Peace, Perfect Peace is the voice of a lively young woman with an observant eye, experiencing that world every day.

As with so many of the treasures from this period, there were some slightly condescending reviews. After summing up the plot, the Guardian noted:

A comedy of contrivances ensues, common sense prevails, and after a ladies' battle domestic peace is made. A small, good-humoured novel handles the children with discretion.

The Observer also stressed the supposedly feminine themes, though perhaps a housewife somewhere can explain what he means, as I can't quite decipher it:

Josephine Kamm dwells mercilessly on post-war discomfort, but offsets the gloom with some happy dialogue and character-drawing. She is at her best with the Woman; and every housewife will know whom I mean by that.

Thanks very much, but I'll take Eileen's own summing up of the novel's womanly concerns:

The characters, especially the women, are fully realised in their faults as well as strengths; Peace, Perfect Peace is, in a quiet way, a feminist novel...

Happily there were also more enthusiastic contemporary reviewers, as evidenced by the below, from the back cover of Kamm's subsequent novel, Come, Draw This Curtain. 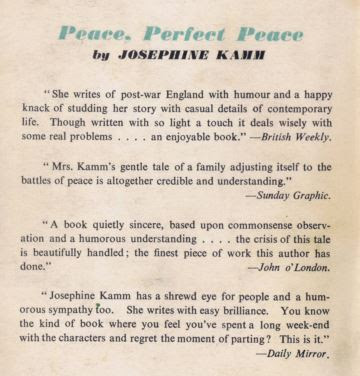 Posted by Furrowed Middlebrow at 1:30 PM