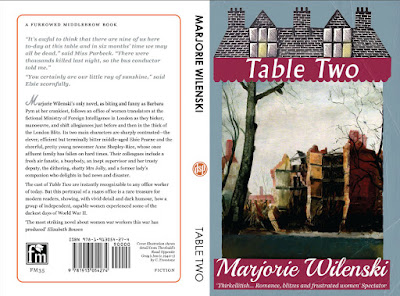 With her usual brilliance as a researcher, Elizabeth Crawford provides, in her introduction to our reprint of Marjorie Wilenski's only novel, an intriguing and poignant glimpse of the author's early life:

Marjorie Isola Harland (1889-1965) was born in Kensington, London, the elder daughter of Wilson Harland, an engineer, and his wife, Marie. Her younger sister, Eileen, was born in 1893. Other details of Marjorie’s life are infuriatingly sketchy. The papers filed by both parents in a long-drawn-out case for judicial separation suggest that in her early years Marjorie witnessed many upsetting scenes in the family home, her mother citing in lurid detail numerous instances of her husband’s drunken violence and swearing. By 1902 the couple had separated, Robert Harland returning to live with his mother in Brixton while Marie retained custody of her daughters.

In 1907 the three were living at 37 Dorset Square, Marylebone when Eileen died, aged only 14. The house is large and it may be that Marie took in lodgers, although the female American singer and three Austrian businessmen staying there on the night of the 1911 census are described as ‘visitors’ rather than boarders. Nothing else is known of Marjorie’s early years other than that she was clearly well-schooled for she graduated from Bedford College in 1911 with a 2nd class degree in history. Three years later, on 5 August 1914, she married Reginald Howard Wilenski (1887-1975) at Kensington Registry Office.

I had previously known that she married Reginald Wilenski, a well-known art historian, but absolutely nothing else, so this glimpse of what was surely at times a difficult childhood is wonderful to have. And although the bitter, unmarried Elsie is clearly front and center in the novel, she is obviously not, as one might have expected in a first novel, a self-portrait.

Elizabeth also sums up the novel, which I reviewed here in 2016, far better than I did:

We first meet Table Two at lunchtime on 2 September 1940 in the Ministry of Foreign Information, which Marjorie Wilenski places on the edge of Lincoln’s Inn Fields, as Elsie and Anne watch an aerial dogfight high in the ‘deep blue sky’. At this time ‘no-one in London was then expecting air-raids’ but five days later everything changed. On 7 September the women have their first experience of the Blitz, night-time bombing that was to dominate life through the autumn. They, like other Londoners, become used to sleeping in shelters and rising the next morning to ‘gape and gaze at the great craters in the streets – [which] by Friday were just a familiar and tiresome obstruction to traffic; there were too many other things to think of...’ But this cataclysm is merely a background to the bickering and jousting for position around Table Two when it is revealed that a new Deputy Language Supervisor will soon be required.

An understated but for once not very snarky notice of the novel in the Guardian put it this way:

They were an awkward squad, the women qualified chiefly by residence abroad to act as translators in the Ministry of Foreign Intelligence, and the professional women, office broken, had their proper scorn of amateurs. Table Two ... does some delicately malicious character-drawing. Contrasted are the comedy of a lost document and a pleasant love-story among air raids. Individuals in this group of women are well differentiated, and it all seems quietly truthful, but had that Ministry no canteen?

Finally, Elizabeth also points out the most tantalizing mention of the novel:

Table Two was published in the autumn of 1942 by Faber and Faber, the firm that since the 1920s had been Reginald Wilenski’s publisher. It was widely reviewed and in addition we are blessed with a view of it in the hands of a reader. For in May 1943 a copy accompanied Barbara Pym as she waited in the queue for her Women’s Royal Naval Service medical. She later wrote that ‘I read my novel Table Two by Marjorie Wilenski (obviously about the Censorship)’. Alas, she offered no further comment.

Now, I ask you, would it have been too much to ask that Pym might have added an adjective in there somewhere ("I happily read" or "my delightful novel" or "by the wonderful Marjorie Wilenski"). For all the gushing that she did about frustrated love affairs, one might have thought one adjective could be spared!
Posted by Furrowed Middlebrow at 11:27 AM