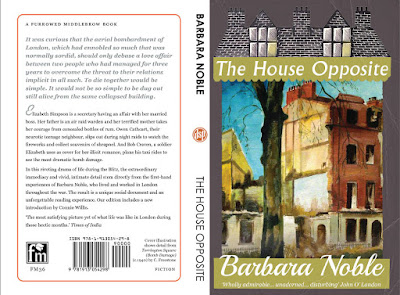 I dislike most novels written about the Blitz.  Most authors get the details, or worse, the attitudes of the time wrong, and the stories they tell are melodramatic and over-the-top, as if they concluded the Blitz wasn’t dramatic enough on its own.

I can only think of two movies and two books which, till now, have gotten the particulars, the tone, and the story of the Blitz right.  The movies are 1987’s Hope and Glory and 2016’s Their Finest, and the books are Rumer Godden’s An Episode of Sparrows and Graham Greene’s The End of the Affair.  And now, The House Opposite.

I wrote here recently about how over-the-moon I was that one of my favorite authors, Connie Willis, author of the breathtaking Blackout and All Clear, had agreed to write the introduction for our reprint of one of my favorite World War II novels (I reviewed it here). So you may imagine how I felt after reading the above passage. Words just can't.

She goes on to explain:

The House Opposite, which is not only set in the Blitz, but is about the Blitz and what it was like to be an ordinary person living through an extraordinary time, working and eating and sleeping, making friends and growing up and experiencing heartbreak, while all the time waiting for the ax to fall.

Noble captured that feeling so perfectly that, as I read The House Opposite, I found my heart pounding during even the quietest of scenes:  Elizabeth eating dinner in a restaurant with her lover, Owen walking through the park late at night, Elizabeth checking on a ward full of sleeping patients.  Knowing that at any moment everyone—and everything—could be blown apart.

Which eventually happens.  But not at all in the way you expect, and so casually that at first you don’t realize it’s happened—or how much damage was sustained.

And to a large extent contemporary critics recognized the value of Barbara Noble's meticulous portrayal. Even the slightly snarky reviewer for the Guardian had to acknowledge the documentary value:

The story of a married business man's liaison with his secretary ... is of no importance, but this novel has positive value as a faithful record of London life during blitz. It is factual, selective, accurate in detail of event and behaviour. It is a notable feat of novelist's reporting.

Others didn't give the sense that their praise was being reluctantly pried from their typewriters, with the Times of India calling it "the most satisfying picture yet of what life in London was like during those hectic months." And Noble's book clearly struck a personal chord with the review from the Sunday Graphic, who said:

Finally, to confound those who imagine that there is only one kind of "woman novelist" turning out standardised products, I draw attention to The House Opposite...

The bombing of London forms an intermittent background to the tale, and I cannot remember any book which so convincingly renders the disordered, keyed-up tragedy and comedy of the blitz period so convincingly.

I read it while my own windows were rattling to gunfire; just enough to awaken old memories. And every word rang true.
Posted by Furrowed Middlebrow at 7:00 PM