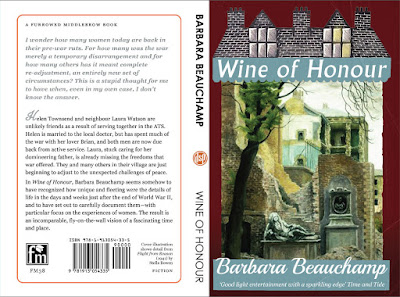 From Elizabeth Crawford's informative introduction to Wine of Honour:

Barbara Proctor Beauchamp (1909-1974) was born in Surrey, the eldest child of a stockbroker, and brought up and educated in France and Switzerland, where her parents had a chalet at Château d’Oex. Her younger brother and sister, twins, died young; Alice aged 21 in 1934 and Philip killed in Singapore in 1942.

Among other things, the family chateau in Switzerland explains the use of that country as a setting in at least two of Beauchamp's novels, Without Comment (1939) and Ride the Wind (1947). Reviews of Beauchamp's books are difficult to come by—she is one of those authors who seem to have been largely ignored by critics—but she apparently had something of a fan in well-known critic (and novelist) Frank Swinnerton, whose review of the former novel in the Observer notes, along with some nice praise, that it has autobiographical elements:

Now, the truest-seeming book I have read this week is "Without Comment," which not literally but in its type suggests first hand experience … Miss Beauchamp tells in "Without Comment" the brief tale of an English family, resident in Switzerland, which is broken by the divorce of the parents; and she concerns herself chiefly with the doings of two young girls, one of whom married for love and escape, while the other, through whose eyes most of the events are seen, allows herself to be seduced in the modern manner by a handsome flirt and has to wait long for any kind of liberty. The book is full of crisp observation and outspoken natural talk; its impressions of the Swiss scene and the Belgian resort in which the children visit their divorced father are excellent; and while the more poignant inventions lack force the squabbles, the lighter adventures, and the relations of the sisters are all excellent. I do not remember better sketches of neglected, sophisticated girlhood.

If it's true that the novel was autobiographical, there might be some additional clues there about Beauchamp's family situation (would that the novel were available anywhere).

The Daily Sketch felt, by the way, that Without Comment was "brilliantly told". Sadly, I've not come across any contemporary reviews of Wine of Honour at all, though a subsequent novel, Virtue in the Sun (1949), was praised by John Betjeman as a "first-class novel", while Howard Spring (if I'm correctly making out the words of a badly scanned blurb) said it was "one of the finest presentations of a boy's mind in such stressful circumstances that I have come on for a long time."

As you will all know by now from my previous raving about it, Wine of Honour is, among other things, a brilliant documentation of women, many of whom have been in the services, adjusting to the first few months of postwar life. Sadly, Beauchamp doesn't seem to have written about the war itself in her fiction, so it was intriguing to get just one little snapshot of Beauchamp in wartime from a short blurb in the Montana Standard in 1940 (presumably it was syndicated to other newspapers as well):

In protest at the "fantastic position" of women auxiliary firemen in London, two women novelists, Miss Barbara Beauchamp [sic], have resigned from the force, their chief complaint being that they volunteered as drivers, but were asked to scrub floors.

The other woman novelist may well have been Norah C. James, but thanks to a careless typist or typesetter we may never know for sure. Based on the information from the author bio above, from the dustjacket of The Girl in the Fog, she must have gone more or less directly into the ATS after resigning from the fire service.

Returning to Elizabeth Crawford's introduction, we do get a glimpse of Beauchamp's postwar life:

While writing Wine of Honour Barbara Beauchamp was living not in a bucolic English village but at 9 Cumberland Gardens, Islington, a quiet enclave close to King’s Cross, in the house she shared with her partner, Norah James, to whom the novel is dedicated. Norah was also a novelist, notorious as the author of Sleeveless Errand which, when published in 1929, had been censored on the grounds of obscenity. In this post-Second World War period Norah’s publisher was MacDonald & Co, suggesting it was not a coincidence that the same firm published Wine of Honour. The two women wrote at least one short play together, broadcast on the BBC Home Service in 1947, and one book, Greenfingers and the Gourmet, which combined instructions for growing a wide range of vegetables with a 'number of specially good recipes in which these vegetables played an important part'. They had been partners since at least 1939 when Norah dedicated her autobiography, I Lived in a Democracy, to Barbara, but by the early 1960s appear to have separated and for the remainder of her life Barbara shared a home with Dr Millicent Dewar, a renowned psychoanalyst. Barbara continued her journalism career after the war, for a time reviewing novels for provincial newspapers and herself publishing three further novels, the last in 1958.

Wine of Honour is available in both e-book and paperback formats from Dean Street Press, released August 5, 2019.
Posted by Furrowed Middlebrow at 7:31 PM