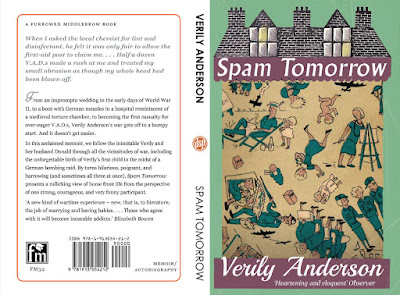 From novelist, children's author, and journalist Rachel Anderson's introduction to her mother's memoir:

In 1954, in an emotionally charged farewell editorial for The Townsend, she wrote, ‘The war took so much from us that we grew to accept deprivations almost without feeling. We lost friends, we lost our homes, we lost whole ways of life..… (yet) we learned that, even in the parting of death, something of the spirit is left behind on earth, something that we had perhaps not known to exist in the living person, something that had lain dormant as the hidden seeds of the willow-herb in the sooty City of London.’

A bit later, Rachel poignantly but inspiringly describes Verily's reaction to her loss of eyesight, which is just the positive, make-the-best-of-things sort of attitude one would expect having read her memoirs:

As Verily’s eye-sight began to fade, her piano was moved next to her bedroom to be more easily reached and she took to dictating her work, leaving her family to correct it. On being registered blind, she insisted, with typical positivity, how delighted she was that at last she qualified to be trained for a guide-dog. She then dictated an article for The Author (Society of Authors journal) discussing how Milton might have adapted to having a canine carer.

When I posted about Spam Tomorrow earlier this year, I also got a lovely comment from another of Verily's daughters, author Janie Hampton (one of the women behind the wonderful History Girls blog). I hope she won't mind if I share it again here so that more readers can enjoy it:

I'm one of Verily Anderson's 4 daughters, I wasn't born until her 3rd book 'Our Square'. We all enjoyed seeing this, and the good news is that Spam Tomorrow is being republished by Dean Street Press on 5 August 2019. Verily was very proud that the Imperial War Museum held a copy of Spam Tomorrow, where it's been used by many WWII researchers. 'Mummy Vincent' was Nicholas's mother Noel, one of Verily's best & oldest friends, a lovely calm woman. Kate was indeed Joyce Grenfell, in 'Scrambled Eggs for Christmas'. None of us were her actual god-children, but she was like a fairy godmother to us, passing on her stage clothes for us to cut up, and secretly buying us a car, house etc. Twenty years after her death, I edited her letters, and wrote her biography for John Murray publisher. I think 'Beware of Children' was called ' No Kidding' in USA - after the film made by the Carry On... film people.

[H]er breakthrough as a writer came in 1956, at the age of 41, when she published Spam Tomorrow, a deft and frequently uproarious account of her wartime experiences on the home front. Critics hailed it as a new kind of memoir, one of the first to explore the lives of women in wartime.

Before the success of Spam Tomorrow, she led a life that was colourful but frequently impecunious. Born in Edgbaston, Birmingham, the fourth of five children of the Rev Rosslyn Bruce and his wife Rachel (nee Gurney), Verily was always certain that she wanted to be a writer. As children, she and her brothers edited and wrote a nursery magazine which they called the News of the World. Verily's haphazard schooling ranged from a few years at Edgbaston high school for girls to being taught at home by her mother, to a brief and unsuccessful stint at the Royal College of Music in London. She said she worked at "100 different jobs" (including writing advertising copy, illustrating sweet papers and working as a chauffeur) before the outbreak of the second world war, when she enlisted with the First Aid Nursing Yeomanry, on the grounds that if there were going to be a war, it would be "less frightening to be in the middle of things".

And finally, at another point in her introduction, Rachel drops in this little tidbit:

From the age of nine, she kept a daily diary, of which there remain 142 volumes, all marked “Strictly Private”. These were never intended for public reading, let alone publication.

Oh dear.  What one wouldn't give to get hold of one or two of those volumes!

Spam Tomorrow is available in both e-book and paperback formats from Dean Street Press, released August 5, 2019. 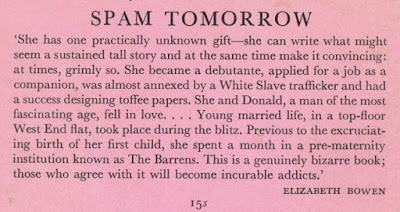 Posted by Furrowed Middlebrow at 8:49 AM