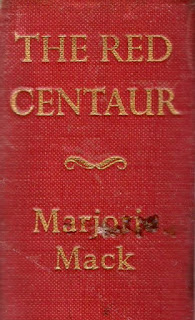 Miss Mack's achievement is equally difficult—to tell a romantic story about Brittany (an aristocratic French family, a first love affair and an arranged marriage) through the eyes of an English child without laying a feminine claim to sensitivity. So often such books are like a continuous boast: Look what I notice; look how tenderly I feel. This is an admirable novel which shows no sign of being a first: quiet and unurgent, written in a prose exactly adapted to the subject: no strain, no overtones. Sometimes one remembers Tchehov: the sadness of revisiting a loved place after a few years' absence—the new villa above the beach, the unbearable children in what had been one's private cove.

I don't pretend to know exactly what Graham Greene meant (in this review from the Spectator in 1939) by that whole "feminine sensitivity" business, though I do think he's dead-on with the "quiet and unurgent" bit, one of my favorite characteristics in a novel. But at any rate his review intrigued me enough when I first came across it so that I flagged The Red Centaur as a book to get round to someday. Someday finally came recently, and I spent a decadently lazy weekend draped across the furniture reading this charming, summery, yet slightly melancholy novel.

The novel is in two parts. In the first, quiet, perceptive, solitary Laurel Maude is 8 years old. She's staying at the family's summer home in Brittany (must be nice) with her parents Hugh and Nellie, and her governess, Miss Gray, a likeable, literary type concerned with and already planning for her inevitable future as a distressed gentlewoman. Laurel's education is steeped in the mythology that Miss Gray loves, with a good helping of fairy tales and romance, and with the sometimes nonsensical songs and jingles her father sings. And in interesting ways Laurel's perceptions of the world around her take on a romantic, mythical quality. This is particularly true when her family meets the residents of the grand Chatêau des Ebihans across a narrow bay from their home.

The French Ebihans—Bertrand and his wife Jeanne, along with their lovely daughter Lise—have been away ever since Laurel can remember ("The Château des Ebihans might have been sleeping under a spell, with no hope of an awakening"), but as the story opens they have returned for the summer, in part because they have arranged a marriage for Lise with a local man (though Lise has yet to meet him). Bertrand turns out to be an ardent Anglophile and the families become fast friends, the Ebihans—with their flag emblazoned with the family crest, a red centaur—quickly becoming the central focus of Laurel's imagination.

It is indeed, as Greene pointed out, a quiet novel. Perhaps too quiet for some readers, but certainly not for me. In fact, I kept expecting the drama in the background to come more to the surface, and was rather anxious about how Dixon might handle it. It could easily have veered toward melodrama, or towards something too obvious, but Dixon wisely stuck to her guns in presenting the adult dramas only to the extent that Laurel is capable of apprehending them. She wonders about Bertrand's affection for all things English, and concludes that it must be because he's so fond of Lise's young English governess. And when the Ebihans' handsome cousin Gilles arrives, he comes to symbolize the red centaur itself for Laurel, but the reader must pay close attention and read between the lines to understand the impact he has on Lise.

Yet, despite the need for guessing a bit at the emotional turmoil and tragedy in the lives of the Ebihans, the novel was completely satisfying. The vagueness of the adult drama around Laurel very effectively evokes the way children really do perceive the dimly understood adult world. And Mack uses an intriguing technique to convey some of the things Laurel senses on some level but doesn't fully understand: she has vivid dreams which seem to echo the real-life drama mixed with the mythology that pervades her life.

The second part of the novel, and the conclusion of the Ebihans' story as well, take place two years later. The Maudes return to Brittany to find subtle—and not so subtle—changes to their idyllic world. The most obvious is that there has been a sort of barbarian invasion in the form a new villa nearby owned by a lower-class French family and their Philistine children. But there are other changes, some perhaps only now perceived by the slightly older Laurel. 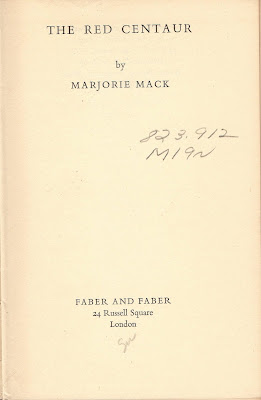 It's high praise for me to say that The Red Centaur reminded me of other favorite novels not written for children but very much about childhood—including Rumer Godden's The Greengage Summer (and, really, An Episode of Sparrows and The Battle of the Villa Fiorita, among others), A. M. Champney's Miss Tiverton Goes Out, and Pamela Frankau's A Wreath for the Enemy, among others (do we need a separate list of these? hmmmm…). It reminded me particularly of Greengage and Wreath because The Red Centaur, too, has a charming, summery, holiday-themed setting, yet contains the slight edge of melancholy associated with a child's first dawning awareness of the sadder sides of life. It also fit nicely with my recent reading of Hilda Hewett's So Early One Morning, which I just blogged about last week.

This is not a book that can be easily shared in little snippets. It's more the elegant shape of the whole that stands out for me than it is short quotable bits. But here is a short sample that struck me as lovely:

So those three went off together, Laurel with the tears still wet on her cheeks but her treasure growing warm again in her hand, Miss Gray, who could never say things that made people laugh, and Lise, who had lost something long ago, almost beyond the bounds of memory.

And then, although this is not a humorous novel overall, I was amused by the following exchange, which one feels might have been taken from Dixon's own life, so true to life is it:

Laurel watched them go with disappointment written large across her face. "Can't we go too and see the horses?" she asked. "I know Lise will want us there." She sprang to her feet. "Father, won't you come with me?''

But her father remained seated on the ground, watching her quizzically, teasingly. "I'm digesting my lunch," he objected. "Lobster takes a long time to digest. Besides, I've got a bone in my leg."

Laurel had not yet ceased to be deceived by this formula. "Another one?" she cried in dismay. "And you had such a bad one the day before yesterday!''

It's all I can do to resist picking this book back up and starting it again from the beginning. I can't quite tell if it's one of those books that will reveal new depths with each reading, or if it's merely a very pleasant, enjoyable, summer vacation kind of novel which will serve to provide one with a sense of warm sunlight and sea breezes even on a wintry day. But I'm certainly planning to find out. In the meantime, however, I have still another impossibly obscure novel about childhood, from another dusty library shelf, which I've already started reading and will no doubt be writing about here soon…

By the way, I've already looked into Dixon's other writings, and have made an interlibrary loan request for her second (and, tragically, final) adult novel, Velveteen Jacket, written two years later. Thereafter, she seems to have turned to children's fiction and memoir for the duration of her too-short writing career. She had two children of her own, though interestingly neither were girls, so perhaps Laurel is based in part on her own childhood rather than inspired by her offspring. The children's titles, The King of the Fiddles (1941), Runaway Boy (1942), The Green-Coated Boy (1957), and The Forbidden Island (1960), all sound somewhat intriguing too (all the more so because Centaur proves how adept Dixon is at writing about children), and her two memoirs—Hannaboys Farm (1942) and The Educated Pin (1944) may also have to make their way to my shelves. She rounded out her career with Breton Fairy Tales (1971). Have any of you ever come across any of these books?
Posted by Furrowed Middlebrow at 5:28 AM