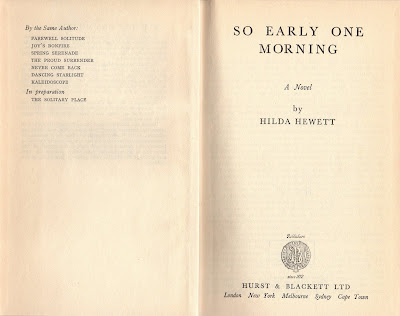 Well, now that the Middlebrow Syllabus is complete, I can get back to some other sorts of posts. In addition to working intensely on the massively revised version of my main list (soon to be retitled, by the way), I've also been quietly proceeding with my mission to track down and read some of the most obscure titles on my TBR list. As usual, not all of them have been buried treasures—some might just as well be quietly reburied. But I'm starting off with one of the real winners.

When the last wonderful issue of The Scribbler arrived a few weeks ago, I was pleasantly surprised to find that it contained a review about an author I had only just come across and was researching to add to my list. The review, by Sally Phillips, was about Harriet and the Cherry Pie (1963), which appeared to be the only book published by one "Clare Compton." However, when I was poking around a bit, I had already discovered that a book of the same title had appeared in the U.S. about the same time, by a Hilda Hewett. Thanks to information I had received from the redoubtable John Herrington, I was able to confirm that this was the same Hilda Hewett who had published 17 novels for adults, as well as one additional children's title, in the 1940s-1960s, and John was able to add that she was Hilda Marian Hewett, née Morley (25 Aug 1904 – 13 Dec 1991). (There must be some strange publishing logic that led to Hewett publishing this one title under a pseudonym in the U.K. but not in the U.S., but who knows what it is?)

I emailed Shirley Neilson, who publishes The Scribbler (as well as Greyladies Books), and shared this information, and there was lots of wonderful transatlantic correspondence and sharing of information with Shirley, Sally, and others. Both Shirley and I became intrigued with what we could find about Hewett's adult novels (though I'll let Shirley report on her findings in her own way), and I put the Interlibrary Loan wheels in motion and soon had So Early One Morning, the eighth of Hewett's 17 novels, in my hot little hands.

And oh my, what a lovely, lovely novel it is. It tells of a 13-year-old girl's first experience of falling in love (alas with a man far too old for her), and I immediately fell in love with it myself.

There's a blurb describing the book in the front of the edition I read, and I have to admit that my first reaction to its description of Pauline's first love with a grown man was that it seemed a bit too Lolita-ish to me—not necessarily a promising topic. Perhaps, I thought, "crush" would be more accurate? But by the end of the novel, my concerns had dissipated. Hewett was going for something more subtle and sensitive than a schoolgirl crush, and treating Pauline's feelings as real love, however unsophisticated, lent them depth and dignity. 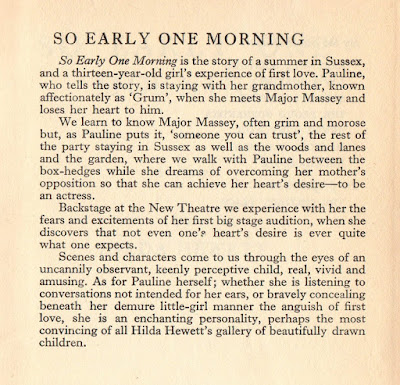 Pauline as a narrator felt remarkably ahead of her time. She speaks to us in the cheerful, funny, sometimes poignant voice of a rather more intellectual Judy Blume heroine. It could almost pass as a modern novel set in the immediate post-war period merely to capture a historical mood. Pauline is actually speaking to us from the perspective of a few years further on, looking back at the idyllic but bittersweet summer when she was 13, the events of which she is only now really understanding. This allows her to be more eloquent and sophisticated in her narrative at times than any likely 13-year-old, and raises the book above the level of teen fiction.

The gist of the story is that Pauline dreams of being an actress, though her mother discourages her, and she often feels the emotional void left by her drama critic father's death several years before. She is spending the summer with her somewhat chilly, prudish mother, her grandmother (called Grum, to the disapproval of Pauline's mother), her step sister Philippa (called "Philip" to Pauline's "Paul"), and her fresh-air-and-exercise-obsessed Auntie Kit at a house in Sussex that Grum has rented from a mysterious friend. Philip's affection for Auntie Kit and enthusiasm for her back-to-nature obsessions leaves Pauline on her own more than usual, until Gran's godson Major Massey, a military man who seems to have had a nervous breakdown, comes to stay and Pauline helps to bring him out of his darkness by reminding him of his own childhood. In the process, Paul finds that there are considerable secrets to be unearthed about her father, her mother's dislike for the theatre, and even about the house they're staying in.

Some of the plot developments are foreseeable enough, though others are not, but what is certainly surprising is how carefully and subtly Hewett is able to evoke Pauline's development over the course of the summer and make the reader experience the dawning of her emotions firsthand. She takes her time to do this, and the novel has the leisurely pace of the summer holidays it describes, but that's what allows for such a lovely payoff in the end. There's a bit of I Capture the Castle here, and perhaps a bit of Guard Your Daughters, but it's mainly its own thing, and if anything it accomplishes its goal of sharing the experience of a girl on the verge of maturity better than either of those two favorites.

One of the subplots has to do with an opportunity to audition for a part in a new play by one of Pauline's favorite playwrights. Her logistical challenge is to convince her mother to allow her to take the part if she gets it, but the deeper challenge she takes on is to understand the teenage character she would portray, who is in love with a much older man. Although the audition itself is only a subplot, Paul's grasping at the character shows her development over just a few weeks. We progress from this passage early in the novel:

It was very odd. I went on thinking about it when I was in bed. Karen was so right in every other particular. I felt I could put her on as you put on a comfortable old shoe, but her falling in love with a man as old as her father was all wrong, like a sudden tight place that pinched in the shoe. Could Mervyn Mills have meant Karen to be a lot older, and might you do a thing like that at eighteen, I asked myself? But then, it couldn't be that because it gave Karen's age quite clearly in the stage directions.

To this passage near the end (no significant spoilers):

Life was a disappointing business, I thought sadly. Once I'd told myself that if only I could be Karen I should be perfectly happy, and here I was, utterly miserable. My thoughts went back to the beginning of it all—that idyllic afternoon at Hurstmonceaux. What was it I had thought then about life being made up of happy beginnings and sad endings? How true, how terribly true that was!

Along the way, Hewett repeatedly captures a sense of Phil's growing intellectual and sensual awareness in general, completely apart from Major Massey or emotional love.

I didn't stop for more than a passing glimpse of a big, cool hall before starting upstairs. The stairs were wide and polished and half-way up, in an angle of the staircase, I caught sight of a big blue and white vase whose cool colouring and lovely curves seemed to satisfy something in me that refuses to respond when Miss Cartwright says: "Now this is considered one of the finest lines Keats ever wrote." It's nearly always the way when you're expected to admire things, whereas when you discover a thing for yourself it's quite different.

She also has a flair for self-analysis and abstract thinking that would put Holden Caulfield in the shade. This comes out poignantly when her mother has scolded her (and perhaps traumatized her) for going swimming alone with the Major, an entirely innocent joy until her mother's anxiety casts a dark shadow across it:

I felt my cheeks bum. The palms of my hands felt sticky. Put like that it sounded somehow horrid. It hadn't been a bit like that. There'd been the sunlight dancing on the sea, the clean fresh smell of seaweed and salt water and the exhilaration of cool air on your limbs. Mummy's horrid, suggestive phrase didn't belong to the scene at all. To some extent of course, I was still a child, living in the age of innocence, but I swear that Mummy's phrase conjured up greedy eyes peering from behind tom curtains, dubious bed linen under pink-shaded lights and tom underwear trimmed with cheap lace—all that is sordid and furtive about the sexual relation. Naturally, at the time I couldn't have put anything of this into words. I didn't even begin to understand such things. I must have sensed it in the atmosphere, as even quite little children can sense sorrow or fear through words which in themselves are neither sad nor frightening.

There are so many lovely touches here I could end up quoting the whole novel to you. I could also quite easily go back and start reading the novel again from the beginning and probably notice all new things the second time around.

I think many of you would quite enjoy this book, if you're able to track down a copy. As for me, I've now ordered one of Hewett's later novels from Abe Books, and requested two more of her books from Interlibrary Loan (bless the Boston Athenaeum's little heart for so consistently being the only American source for many of the books I'm eager to find). So, you'll certainly be hearing more about Hilda Hewett!
Posted by Furrowed Middlebrow at 5:32 AM