This is another of my recent spate of interlibrary loan requests of deeply obscure novels that I've been meaning to read for ages—my "seize the day" not-quite-resolution for the year. It's completely coincidental (unless, as Freud suggested, there really are no accidents) that this one arrived just after I'd finished reading The Red Centaur by Marjorie Mack (aka Marjorie Dixon), but they were quite interesting to read in close proximity. Both novels are adult works focused very much on childhood and the perceptions of children, though at that point the resemblance ends…

Valentine Dobrée was loosely associated with the Bloomsbury Group, being as she was a friend of Dora Carrington's and, apparently, a lover of both Dora's husband Ralph Partridge (later married to diarist Frances Partridge) and Dora's lover Mark Gertler—though I can't find any details about how this affected their friendship—perhaps, in typical Bloomsbury style, they were perfectly cheerful about sharing their lovers? Like Dora, Valentine was mainly a visual artist, but she published two novels in the late 1920s, as well as a story collection in 1935. The second novel, The Emperor's Tigers (1929), seems to enter the realms of fantasy, but her first, Your Cuckoo Sings by Kind, is more grounded in reality, perhaps based in part on Dobrée's own childhood?

When the novel opens, Christine is about twelve years old (she's fifteen at the end of the novel, but I couldn't find an explicit reference to her age at the beginning). She is living with a foster family, along with her two brothers, their mother having run off with another man when they were very young and their father living in India. The Harrises are a clergyman and his wife, a cold-hearted, self-righteous woman who can't begin to comprehend Christine's emotional complexity. One of my favorite passages (and one of the only somewhat humorous passages) is about the presence in the Harris home of bamboo furniture, which must be concealed as thoroughly as possible:

It was here Christina acquired her shameful knowledge regarding bamboo furniture. She could never show surprise afterwards that such furniture existed. "Where does such appalling stuff come from?" Not for her the shrug of ignorance, for not only did she know of its existence, but she knew all the variations it was capable of. If any such piece had strayed into an otherwise solid room, instinetively Christina's expert eye came upon it, and she always felt guilty about it. It taught her to train her eyes to look out of the window or into the fire until such time as she could practise a moral nose-holding and swallow indifferently both bamboo and mahogany. She could not imagine anything worse than Mrs Harris's look of grieved betrayal the time she had caught her lifting the Indian table-cloth. For Mrs Harris had persevered, and done her best to disguise it. It was never mentioned, even in its most successful transformations, for they all understood that one of Mrs Harris's first actions on acquiring riches would be to exchange the bamboo stuff for something that could remain naked and unashamed.

Christina can do no right for Mrs. Harris, who imputes the worst possible motives to her every move, driving her to greater and greater reserve and, occasionally, to greater outbursts of rebelliousness:

The result of the general coldness was that she rapidly developed a side to herself which she thought would be acceptable to the people she came in contact with. Slowly, helped by circumstance, she produced a Christina for daily use, though she never lost the original Christina, who looked on, always a little aggrieved.

Happily, about a third of the way into the novel, her father takes her from the Harrises and she is placed with another family, the Deans, who are their opposites in virtually everything, including Mrs Dean's immediate affection and concern for Christine. But it is clear that, although her situation has improved, she already bears the scars of her unhappiness. Even here, she occasionally broods on the injustices of life:

Twice Christina had stood convicted, guiltless of the crime alleged. They were only minor sins, but her truthful denials had been added as lies, and the sum made a grave accusation that each denial fed, mounting to an enormous total. A broken saucer at supper in the school-room, and a bitch on heat escaped from the stables, were the charges. What more suspicious than the flushed face and the emphatic and angry denials? However, the whole episode had a lasting effect on Christina, who thereafter felt innocent of many faults, a feeling of being for ever wrongly accused and superlatively blameless; thus even when conscious of error, rejecting her guilt as a just requital for those two injustices. It was a logic learnt in her environment, where loose mentalities set off two understatements as justifying two overstatements. The incidents of false accusation revealed to Christina truth as a sorry beast, forced to bear the burdens of those strong enough to compel her. Whenever she began to brood, she would remember those offences against her. Eternally in the wrong, she clutched these wrongs to her as a talisman to stave off any indictment.

It's a very striking novel, at times quite brilliant in its observations of human nature and the perceptions of a child. One review notes that Dobrée rewrote the novel five times before she was satisfied with it, and that sort of meticulousness comes through loud and clear. Though I should note that the level of concentration that results, the distilled meaning in every line, is perhaps just a bit overwhelming. I sometimes got a bit dizzy in such high altitude. 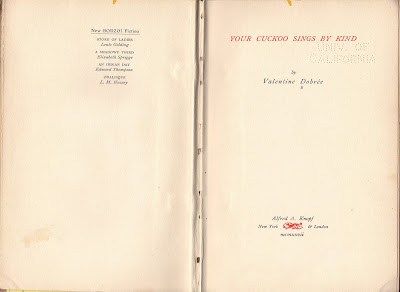 It is, however, far darker in tone than The Red Centaur, and I have to note that it contains two disturbing (though oblique and nonexplicit) scenes of sexual assault (of some sort, it's not entirely clear) and brother/sister incest. L. M. Montgomery reportedly read the novel and said the former scene was "the vilest thing I ever read in a book" and then burned the book because "[n]othing but fire could purify it." (Presumably she didn't get round to the second scene, which might be just as well…) Such an extreme reaction to what, after all, are artfully written scenes, not exploitative or titillating at all, might say more about Montgomery's repressions or her own experiences than about the quality of the novel, but it's true enough that it's not for the faint-hearted. As much as anything, it is Christine's reaction to the scenes that will disturb, particularly her guilt about getting her beloved brother in trouble following the second scene.

But it's also true that Christine, as a character, comes vividly to life—a troubled, damaged girl, but one who makes sense. One might find her difficult, as even the kind Mrs. Dean does, but one is compelled to observe her, to see the wheels turn in her head. Her damage may even be the source of her brilliant and unusual mind, but one hopes, by the end of the novel when she is just fifteen, that it will offer her some form of freedom and opportunity that a less bruised and battered character might not find.

Given a choice of a re-read between The Red Centaur and Your Cuckoo Sings by Kind, there's no competition. I'll happily pick up Centaur for a second reading. But for those interested in a serious literary exploration of a troubled girl evolving into a troubled but perhaps liberated woman, the latter is worth the time as well.
Posted by Furrowed Middlebrow at 5:09 AM