In the realm of romance, I may have my moments, but I have never exactly been an addictive fan of "romance" novels per se.  I admit that a few years ago I might even have sneered at the idea of reading anything labelled a romance.  However, there has been a considerable evolution in my reading habits over the past few years. First, Persephone introduced me to D. E. Stevenson's lovely, humorous, lightly romantic novels a few years ago, and I found it surprising to learn that she had often been marketed as a romance writer.  Stevenson in turn led me to Elizabeth Cadell, whose books are a bit zanier—perfect brain candy—and have also been labelled "romance," though they too seem to be something more.  Gradually, I started to realize that the field of romance is as widely-varied and has as many types of "brow" as any other genre.  And before I knew it I was reading and really enjoying Noel Streatfeild's disowned Susan Scarlett novels and the likes of Frances Turk's The Five Grey Geese, a quite silly, yet charming, novel about five impossibly chipper Land Girls finding adventure and love during World War II.

It's a slippery slope.

And I seem to have slid a bit further during our first-ever book shopping expedition to Oakland this past weekend.

It is obviously true that Oakland, across the Bay from San Francisco, gets a bad rap.  It's on the news almost every day for yet another shooting tragedy in its rougher neighborhoods, and even after more than a decade in San Francisco, and frequent visits to Berkeley for book shopping, dining, and visits to the University of California, Berkeley, I had barely set foot across the border into Oakland.

Which, it turns out, was a shame, because, exploring the Piedmont Avenue neighborhood on Saturday, it was clear we've been missing out on some very cool places—not least of which are four second hand bookstores within a two block radius.  It must be one of the few places left in the world where such a thing is possible (happily, Berkeley is another).  And since the rents are (a bit) lower in Oakland, it's still possible to have bookstores with a funkier feel, as if they're run by folks who just really love old books and whose shops may be as much an excuse for sorting through them and enjoying them as they are a way of making a living.  This was the vibe of three of the four bookstores, and even the fourth—a bit larger and commercial-looking and with a far less dusty array of books—had a relaxed, friendly charm.

The trouble is, although I still love going to bookstores, my interests have gotten so obscure that it's not often I find something I really must have.  (Most American bookstores, for obvious reasons, just don't make it a priority to stock British women writers that almost no one has heard of and even fewer people would want to buy.)  So, I made it out of the first two shops unscathed.

After that, it seems, the stars must have aligned themselves for romance…

The third bookstore, Owl & Company (which seems likely to be a regular haunt for me from now on), had a table full of dusty, bedraggled $1 books outside the door, and unlike most bookstores which offload their old pop fiction paperbacks this way, here was a selection of old hardcover obscurities, including several low to middlebrow novels I can't recall now.  (Note to self: make notes to self next time.)  Sadly, nothing British presented itself, but I did find myself seduced by a dust cover: 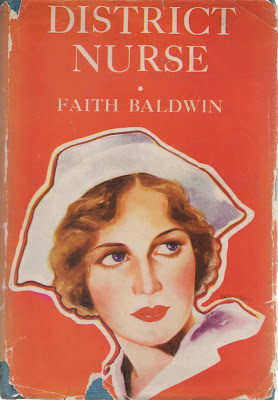 Faith Baldwin was an American romance writer I came across because she was advertised on the dust cover of the Margaret Widdemer book I wrote about recently (also a romance, I might point out—more slippage), and for the princely sum of $1.00 I couldn't resist at least adding the cover and the advertisement on the back to my collection, even if I never actually read the book.  It was published in a series from Grosset & Dunlap called Madison Square Books, and I'm always interested in finding out more about popular imprints as well: 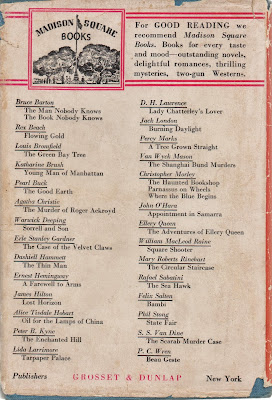 If anyone is interested in the compelling plot of District Nurse:

And am I the only one confused by the back flap?:

Wouldn't one think that a title and author might be a core part of any book ad?  Unless the title actually is "Four People on a Cruise…"?  Apparently Madison Square Books didn't spring for the very highest quality copy editors…

At any rate, the owner of Owl & Company said he was happy the book had finally found a home.  And the fact that I kept finding things that were almost irresistible suggests that I'll probably adopt more of his books in the future.

Finally, I moved on to the Book Zoo down the street and the romance really began.

Here, I came across not one, not two, but three books by Maysie Greig, a writer I added to my list a while back after reading a contemporary review of one of her "light romances."  Information about her was sparse, but she sounded entertaining—could she perhaps be just a bit Cadell-ian?  All three of the books were hardcover, all with dustcovers intact.  They were priced at $7, $9, and $25, and naturally the most seductive was the $25 one, which was in perfect shape and included an author photo and bio.

Call me crazy, but I usually won't purchase more than one book by an author until I've actually read something by her (and I am also cheap).  So I sternly told myself the $7 one would have to do—I figured I could always come back for the others, as a mad rush for Maysie Greig novels seemed unlikely—and I went to pay.  I just happened—quite innocently (??)—to mention to the owner that there was another of her books that I would have liked, but it was a bit too expensive…

In San Francisco, a comment like that would likely have been greeted with a shrug and a more or less condescending smile, or perhaps an offer to put the other book on hold until I felt capable of affording it.  But by contrast the Book Zoo's owner demanded I show him the other book to see if we couldn't make a deal.  I pointed it out, and happened to note that there was a third one I was tempted by as well.  He did some quick calculating and offered me all three for $20—less than half their marked prices.  He joked that his rent was overdue and he was in the mood for making deals.

Now, I am simply not the kind of person who is comfortable bargaining, so this was a very new experience for me.  Here is a rough approximation of how I looked leaving the store: 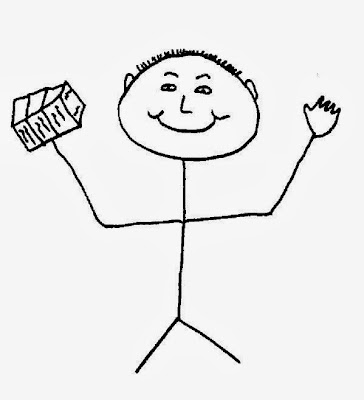 And here, for your viewing pleasure, is the whole stack of bounty from my romantic shopping spree:

Of course I have to share the covers too.  Why do I find dust covers so enticing? 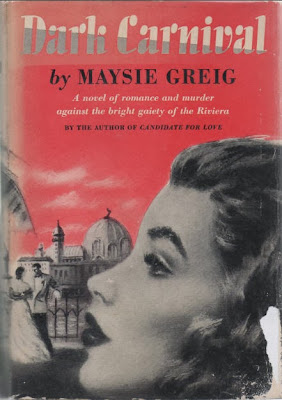 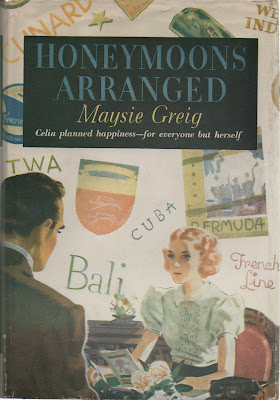 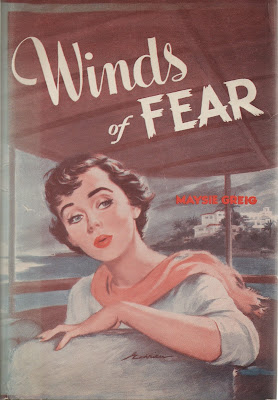 [For those of you familiar with contemporary pop music, don't you wonder if Katy Perry's grandmother could have been the model for the Winds of Fear jacket art?  I'm just saying.]

Here's the author photo and bio that made Dark Carnival particularly seductive to me:

And Honeymoons Arranged was printed in the Triangle Books series, just as the Margaret Widdemer book was, and the back flap and back cover have advertisements for a few more writers who are new to me: 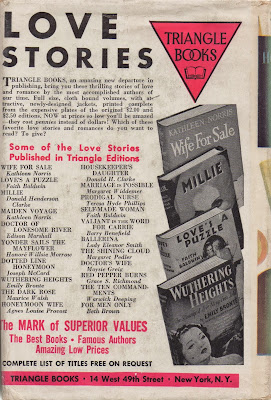 I love the fact that alongside such masterpieces as Agnes Louise Provost's Honeymoon Wife and Teresa Hyde Phillips's Prodigal Nurse, Triangle also offered Emily Brontë's Wuthering Heights.  I wonder if a reader who had just savored Kathleen Norris's Wife for Sale would have had to exert a bit of effort adapting to Brontë's style and mood? I'm sure I would have.

So that was my Saturday shopping spree that turned out to be a bit more romantic than anticipated.  Perhaps I'll do a short post soon on Dark Carnival, which I actually finished by Sunday evening.  Although my feelings about it aren't particularly enthusiastic, I can hardly deny that I found it highly readable.  And I'm actually kind of looking forward to the others as well—even if they are, sadly, not as Cadell-ian as I hoped.

By the way, I've also figured out how to spend my budgeted-but-unspent surplus from the library book sale a while back.  I've ordered several highly-coveted books from Amazon in the past week or so, and I can't wait to tell you about them.

But I won't spoil the surprise…
Posted by Furrowed Middlebrow at 6:30 PM