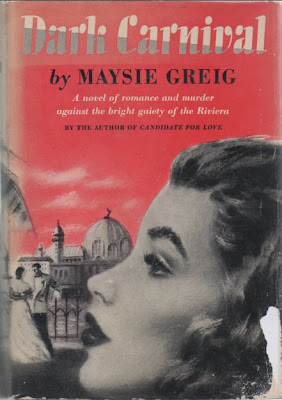 On Saturday, I'll be posting the fourth and final (thank heavens!) update of Edwardian writers added to my Overwhelming List, and will soon after be able to do an update of some very interesting writers from the later parts of my date range, which I've come across here and there while being a bit bogged down in Edwardians.  But in the meantime...

I wrote a couple of days ago about my shopping expedition in , my discovery of a cache of Maysie Greig novels, and how I've gradually gotten in touch with my inner romantic.  Since not many of you are likely to have experienced a Maysie Greig firsthand, I figured I should give you a briefing.

Apparently, Greig wrote two kinds of novels—straightforward romances and light romantic suspense.  This one, as you might have guessed from its cover, falls into the latter category—a sort of poor man's Mary Stewart (though I was hopeful at first that it wouldn't be just for poor men).

The book does have a certain charm.  It's set in Nice and in the nearby hill town of in the days before, during, and after Carnival.  Shirley McFriend has been sent to Nice by her eccentric Aunt Cleo to recover from a broken engagement to Walter Haldon, who works at the U.S. Embassy in .  Walter has broken their engagement in part because he has discovered that, four years earlier, when he and Shirley had just met, she was still enamored of Robert Revenau, a patient of her surgeon father's.  (And perhaps in part because, honestly, Shirley seems to possess all the intellect and wit of the average canteloupe?)

The plot revolves around Shirley's reunion with Robert, who lives with his mother, the dizzy, fretful Countess de Revenau, in the ominous town of .  The Countess has been renting rooms and giving French lessons to pay the bills, and two tourists staying with them have recently plunged to their deaths in the ravine next to the Revenaus’ château.

There is a jewel theft.  There are questions about whether Robert was really cured by Shirley's father or whether he remains disabled to the extent that he can barely walk.  There is a reporter investigating the tourists' deaths, and the brother of one of the tourists, who is determined to get to the bottom of it.  All of the plot twists are made rather painstakingly obvious (though what isn't spelled out, and is perhaps the greatest of the novel’s mysteries, is why any of the men—let alone all of them—would be enamored of the dim-witted, humorless Shirley).

All of that said, however—since I usually try not to be negative about books I review here (figuring that, if my focus is on largely forgotten writers, a bad review would be flogging a dead horse)—I have to confess that I read this novel in one day and felt distracted and impatient when I had to put it down now and then.  Which is honestly a bit inexplicable—particularly in someone who used to look down a bit condescendingly on romances in general.

It's not that Greig is a bad writer.  Here is her description of the bus ride Shirley takes on her first visit to Trione:

There were so few passengers in the bus Shirley couldn't help noticing them. Evidently Trione wasn't an overpopular place. A fat woman in black had three shopping baskets and two bags. She alternated between retrieving oranges which were rolling around the bus and refastening the snaps which kept coming undone at the side of her dress. There was a thin, despondent-looking woman with three children. They sat sucking sweets, looking equally despondent. There were two elderly women sitting together dressed in black. They looked as maiden aunts are supposed to look but rarely do. There was a man who looked like a farmer and one other man, a man who seemed so out of place that she found herself looking at him with interest.

He was an American, she guessed, from the cut of his suit which was obviously expensive. He was dark-haired, intense-looking, almost fantastically handsome. He looked to be the type one associates with stars of the more brutal type, who ill treat their women but the women come back for more.

This is a pretty vivid picture.  It makes me intrigued about the lives of all of the women on the bus—to such an extent that I wish Shirley could have followed one of them home instead of striking up a conversation with the fantastically handsome American, whom she perhaps hopes will be brutal to her.

But the dialogue is desultory at best:

He leaned forward. "Shirley, what happened up at the chateau? You don't look exactly as though you enjoyed yourself."

A slight shiver went through her. "I didn't. It's rather a dreary place and Robert being crippled…" Her voice died away.

"What else could there be?" Her voice was edged.

Or how about this scintillating passage?

"Anything on your mind, Shirley?"

"No, nothing," she said quickly.

"All the same, I wish you wouldn't go up to the chateau," he said presently. "Somehow I don't think it's a healthy place."

"Surely there's reason enough. Two deaths took place there." He spoke angrily. "Besides there's something about the setup I don't like. I'm not specially intuitive, but when I was up there I smelled danger."

She laughed unnaturally. "What are you trying to do?  Scare me off going? […] If you knew them … You haven't met either of them, have you?"

He shook his head. "No. I've never set eyes on either of them. At least," he added more slowly, "I don't think I have."

Even when a third-grader reading the novel would be ready to scream the novel's "secrets" to Shirley, she goes on ploddingly asking, "What do you mean?  What are you suggesting?  Why would you think that?  What could it mean?"  A little of which goes a long way.  When I reached the inevitable happy ending, I found myself expecting Shirley to say, "Marry you?  Why, what do you mean?  Why do you ask me that?  What are you implying?"

[For those of you who are D. E. Stevenson fans, I can't help but wonder if this is the type of heroine that Janetta Walters must have created so successfully.  What do you think?]

And yet, I read Dark Carnival in one addictive gulp.  I am even looking forward—heaven help me—to Honeymoons Arranged, one of the other Maysie Greigs I picked up last weekend, which looks to be a straightforward romance about Celia, who "planned happiness—for everyone but herself."  Oh, dear.

I don't think there's any real danger of me becoming a romance novel junky—or at least not a Maysie Greig junkie.  The book I put down for a day to read Dark Carnival was Elizabeth von Arnim's Mr. Skeffington, and when I picked it up again I felt like I was eating filet mignon after a week of ramen noodles.

But I'm still glad I got a chance to sample Greig's wares. Sure, I wished at times I could abandon Shirley to her befuddlement and follow one or more of the women of Trione to their homes, or—better still—track down Shirley's adventurous Aunt Cleo, a Cadell character just waiting to happen.  But an occasional foray into a simpler world is a good thing.

I won't mind, though, if Celia turns out to have a slightly less simple perspective than Shirley…

Posted by Furrowed Middlebrow at 6:08 PM