In acknowledgement of the premeire just a few days ago—at the BFI London Film Festival—of the new film Saving Mr. Banks, about the making of the movie version of P. L. Travers' novel Mary Poppins, I thought I should finally write about this curious little book I read a few weeks ago.  As far as I can tell, it was actually Travers' first published book, though Mary Poppins appeared close on its heels and instantly overshadowed everything else Travers did, and this book never seems to have gotten much attention.  Which means that it's right up my alley, right?

Saving Mr. Banks, which portrays Travers' negotiations (and famously adversarial relationship) with Walt Disney and the making of the film as well as flashbacks to Travers' childhood, doesn't open in the U.S. until Christmas, but it's already getting Oscar buzz.  For me, any excuse to see Emma Thompson in a film is a good one, but judging from the movie trailer she should be especially entertaining as Travers.

I do wonder though if Disney the studio, which is releasing the film, will, in standard Disney fashion, give the film a happier ending than is warranted.  It would be an ironic twist, considering that Travers was so unhappy with the Disney version of her novel that she refused to sell the film rights to any of her Mary Poppins sequels.  She was reportedly particularly unhappy that Disney toned down the harshness of the Mary Poppins character and of the novel in general, which she apparently did not even think of as especially a children's story.  (In her 90s, Travers granted permission to Cameron Mackintosh to produce a stage version, but only with the proviso that no Americans should be involved.)

Bearing this in mind, and with everything that was still to come in Travers' career, it's fascinating to read her earliest work, full of youthful humor and energy.  Based on her 1932 trip to the Soviet Union, Moscow Excursion has been read by some critics as a parody of the fairly numerous more earnest, journalistic travelogues published over the preceding decade or so, as more and more intellectuals became interested in communism and wanted to witness the Soviet experiment firsthand.  Of course, only a few years later E. M. Delafield would publish her own travelogue of the Soviet Union, Straw Without Bricks (1937), later reprinted as The Provincial Lady in Russia (though it doesn't seem to have been intended by Delafield as a provincial lady book but as a more serious journalistic effort).  I haven't read the Delafield book in several years, but if I recall correctly Delafield seemed a bit more serious in tone than Travers.

Moscow Excursion is a short book—weighing in at only a little over 100 pages—and it's clear from the start that Travers is approaching her tale with tongue firmly in cheek:

'A ticket to Russia, please.'

A group of Intourist officials scanned my face earnestly. It was evident that they recognized in me a notorious criminal. Would they give me in charge, I wondered. No. At least not yet. They would, however, keep me under strict surveillance. This I gathered from the glances which passed between them.

I have got my ticket. And my passport visa! I wonder what was the redeeming feature in those four photographs of a criminal lunatic (the cameras of passport photographers may not lie but they do a good deal of inventing) that spoke for me to the Consul—or whoever it is that gives passport visas. Anyway, I have been proved harmless enough to enter Russia for a period of some weeks. Perhaps the answers to the questions were sane enough to balance up the photograph....

Travers assures the reader that her interest in making the trip is purely apolitical:

Isn't it curious that nobody can hear even the name of Russia with any equanimity? Those for it are fanatically for it, those against it fanatically so. My forthcoming trip seems to be either the Chance of a Lifetime or a Piece of Utter Recklessness. If I had suggested a voyage at Arcturus I could hardly have caused more of a stir. This I should not mind if the enthusiasm and the disapprobation were not given such political significance. They have none for me, but then, though I am uncomfortably conscious that a person without a political ideal to-day is as inadequate as a cow with three legs, it is difficult for me to think or feel politically. Nobody, it appears, can conceive that a person who is admittedly neither for nor against the Soviet regime should want to go there.

It's true that most of her earliest observations are rather negative, though it's also true that that may have been simply the reality she observed.  Their tour guide points out the destruction or reappropriation of churches, for example ("[o]n more than one occasion a church in the process of being demolished has been pointed out to us with ill-concealed triumph"), and takes them to a rather cold, dispirited-sounding crèche:

In the room for two-year-olds several very small old men were seated round a table trying hard not to spill their gruel on their pinafores. They were grave and sombre, very conscious of the red slogan that stretched across the room. The guide translated it. 'Play is not just fun. It is the preparation for toil.' There, little ones!

And at times Travers can sound a bit condescending.  For example, observing what she takes to be the overall contentment of most of the Soviet citizens she sees, she comments:

To-day I saw V—, who is sharing the curtained-off end of a passage with another girl, sleeping on the floor and fetching water from another building. And she is not only happy but ecstatic. What is it? Does she feel herself part of some moving thing, some stream of new and glorious life that eludes us? Or does she only think she is, as a result of the slogans in the air? Oh, well, it's the same thing anyway.

Overall, however, there are not a lot of terribly serious observations about Soviet politics or culture.  Travers is more concerned with entertaining, and the book is certainly that.  When she sneaks away from their tour guide to see a local production of Hamlet, her description of what she sees is hilarious and even thought-provoking:

Every possible rule was broken, the text was murderously cut about and great wads of Erasmus and anonymous buffoonery interpolated. The characters, too, were altered. Rosencrantz and Guildenstern became a couple of clowns who were let loose before a drop-curtain every time a scene needed to be changed. But, when you come to think of it, these two are rather vaudeville and are easily turned into slapstick comedians. How often have we groaned when some star actor rhetorically hurls at the empty air the question whether it is nobler in the mind—etc, etc, and not even echo makes reply. Not so here. The speech was divided between Hamlet and Horatio. The two students are in the library of the palace, Hamlet turning a globe, Horatio on steps reaching up to a high shelf for a book.

To be or not to be—begins Hamlet.

That is the question, returns Horatio, as one who observes, Boy, you've said it. And so the speech goes on and for once appears real and the natural comments of very young undergraduates.

Imagining Horatio responding as if to say (in today's lingo) "Totally, dude!" made me laugh out loud, and also made me wish I could have seen the performance for myself—though Travers' extrapolation from this performance that the success of the Soviet revolution could be put down to Russians being "natural actors" (she also compares them to dancing bears) might be just a bit simplistic. 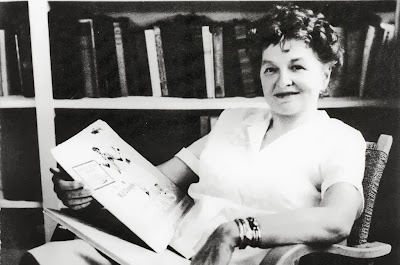 Still, the book was completely enjoyable, and if you're interested in Travers you may want to track it down.  I can't resist (when can I ever?) quoting one final humorous passage, wherein Travers has been finding out about Soviet divorce laws:

But in marriages where there are no children there is no end to the number of times you may be married and divorced. A young American I met a few days ago told me that a friend of his, also an American, had given an old gramophone to a Russian girl before he returned home. She was conspicuously plain in person, but she was immediately married by a young man with a taste for music. As soon as he had gained possession of the gramophone he divorced her and married a prettier girl. Succumbing, he made his new wife a present of the gramophone, and upon that she divorced him and married a handsomer husband. And so on. The gramophone led a giddy life, passing from marriage-bed to marriage-bed. Its end is not recorded. Probably it died eventually of old age and overwork....

I am embarrassed to say that, despite my interest in Travers and in Saving Mr. Banks, I have never actually read Mary Poppins.  Nor, horror of horrors, have I ever seen the movie.  I know that I have to read the book first, as I would rather have Travers' original idea of the characters in my head than a sweetened Disney version, but somehow I've just never gotten around to it.  Perhaps the anticipation of seeing Emma Thompson as Travers and Tom Hanks as Disney will inspire me!

Were any readers in England lucky enough to see the premeire?  If so, do tell!

Posted by Furrowed Middlebrow at 6:00 PM