My idea of a fun afternoon lately seems to be submerging myself in old issues of The Bookman, The Saturday Review, or other periodicals that are happily now available online.  (Admittedly, I would be better off at the gym, but c'est la vie.)  These magazines are a great way to learn more about the literature of the time and to come across reviews of books now buried by the sands of obscurity.  And in the process, I often come across little tidbits that are amusing or revealing and which shed light on the broader perceptions, priorities, and attitudes of the time.  Don't expect any profound sociological insights, but here are a few I came across in my recent perusing.

THE POWER OF THE BLURB

I've always loved looking at publisher's ads.  I don't think I'm much of a sucker for most other kinds of advertising—I never quite believe that switching toothpaste will make me happier, more popular, or thinner, for example.  But book advertising is my kryptonite.  Every new book, enticingly presented with an almost childlike enthusiasm, seems endowed with the ability to transport me to realms of peaceful bliss and enlightenment hitherto unknown to humanity.

We all know that very few books live up to the promise, but somehow the magic of the blurb still has its effect.  For example, why do I feel, looking at this ad from 1936, that I've missed out on a literary masterpiece?:

It turns out that Knox, an English priest, also wrote detective novels, satires, and extensive theological works, but Barchester Pilgrimage seems to have been his only effort to be the reincarnation of Trollope.

Alas, readers seem to have been so "stunned" by the three novels mentioned in this 1927 ad that they had to repress all memory of them: 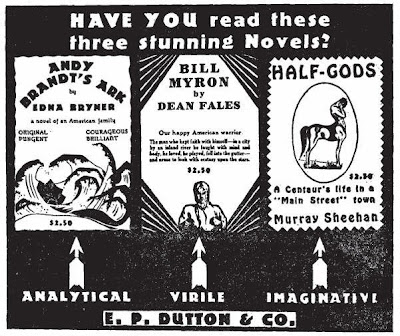 And even though books about the Brontës were a dime a dozen early in this century, this ad has convinced me that this one is surely the Brontë novel: 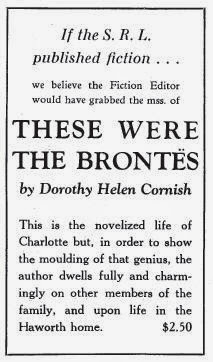 But I think the headline for this ad is my all-time favorite:

Indeed, one never knows in my family, so perhaps I should give Same Way Home a whirl!

Meanwhile, this next novel may have been headed for controversy, but it seems to have been way-laid along the way: 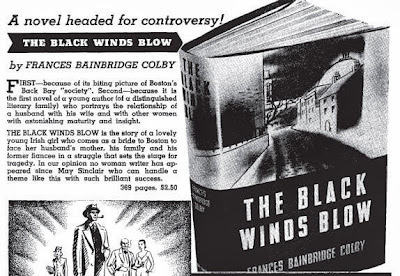 And finally, this 1940 ad is really genuinely intriguing.  I only recently stumbled across the name Martin Hare (pseudonym of Zoe Girling) in a contemporary review.  She has virtually no web presence at all, and seems to have been completely forgotten.  And yet here one of her novels is given pride of place, advertised alongside Vera Brittain's Testament of Friendship, which was surely a highly-anticipated work after the bestsellerdom of Testament of Youth: 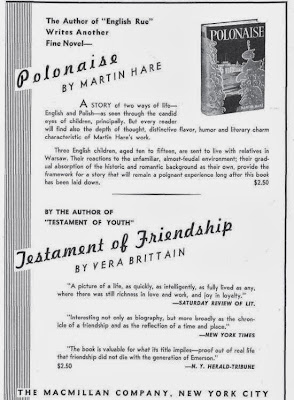 And the description really makes Hare's book sound so enticing that I have had to add it to my "to read" list.  You see what I mean about the power of the blurb?

Until this past week, I've never really paid attention to the personal ads sometimes shown in these old periodicals.  But then I happened to notice these dueling ads from 1933:

I confess I can't fathom the advantage testosterone and a Y chromosome offers to a typist, but it must have been sufficient to for "male typists" to be a selling point.  At any rate, just below this ad Miss Beaumont and Miss Hall put in their two cents' worth:

Personally, I find something a bit smug about Miss Hall, with all her "satisfied authors" that she keeps on a list, probably just waiting for an excuse to show it off to anyone who will listen.  So I've decided that Miss Beaumont is worth the extra 3d per 1000 words.  No wonder she can charge even more than typists with testosterone!  (But now it's driving me crazy—surely one of Barbara Pym's heroines made a "speciality" of indexing, but I can't remember which. Perhaps Pym had met Miss Hall and was impressed by her list...)

But it wasn't only typing taking place in the personals columns, as evidenced by these excerpts from 1940:

From the "merely average, normal woman" seeking correspondence with an "older, superior person"—I'd love to know the backstory for that ad—to the lonely "Manhattanette" stuck in the Midwest, who is "[n]ot too deep, not too narrow," there's plenty here to ponder.  Not the least of which is wondering about the relationship of the two women seeking private school positions together.  And "Eppie in de Toal Hole" is clearly seeking someone with literary knowledge—I had to go online to find that the quote comes from Silas Marner.

Finally, these two, I think, speak for themselves:

Don't set your sights too high, boys!  (I confess there are days when I can relate to "Young Man," though…)  Clearly, these guys could certainly learn a thing or two about motivation and self-confidence from "Personable Woman":

What on earth can we make of the fact that her weakest point is her "Tweezer dexterity"???

Oddly, among the joys of reading these old magazines, pleasure in their humor seems to be missing.  Maybe jokes can't survive time travel?  I think I get this one, but it seems oddly unhilarious: 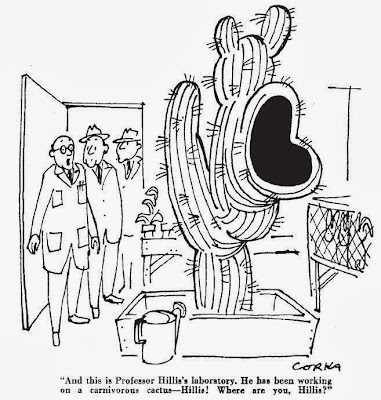 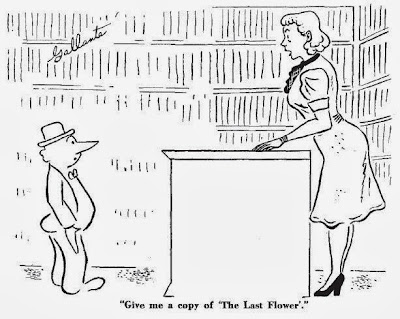 Now, I looked up The Last Flower and found that it's an anti-war story published by James Thurber in 1939.  But that doesn't seem to get me any closer to understanding the joke?  Any ideas?

And one final warning from the good people at Saturday Review: 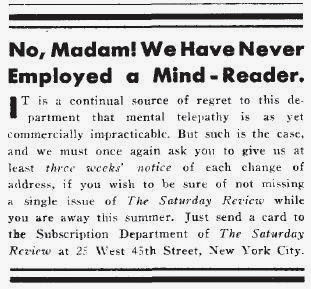 Posted by Furrowed Middlebrow at 10:06 AM