"We all have our troubles": MONICA STIRLING, Journeys We Shall Never Make (1957)

I won’t keep doing a blow-by-blow of all my recent Monica Stirling reading, but if you click the tag at the bottom of this post, you can see all my reviews about her. Having read three of her novels now, I decided it was time to sample her short stories. Her first collection, Adventurers Please Abstain (1952), will have to wait till my library access improves again, as used copies are not within my budget, but I tracked down this, her second and final collection, and became even more enamored with Stirling than I already was.

In some ways, Stirling’s talents--her knack for precise observations of both the micro and macro of her characters and settings, her offhand wit, and her flair for dialogue--are perhaps even better suited for short stories than for novels. And her particular interest in postwar Europe, in ordinary people piecing their lives back together during the advent of the Cold War, make this a particularly intriguing collection. Reading it, I could almost have believed that Hemingway, rather than sinking into narcissistic dreck by the 1950s, had remained in Europe (sans bullfights and misogyny) and kept writing incisive stories that allow us to be flies on the wall at a time of chaos and glamour.

There are 18 stories here, in less than 200 pages, so I obviously can’t mention them all. Some I liked more than others, but there were no duds to be found. The first story, from which the collection takes its title, is particularly reminiscent of Hemingway: Isabelle, a rather posh Parisienne is brought up against the realities of life behind the Iron Curtain when she is tasked by her husband with meeting the train of a Yugoslavian acquaintance, Madame Slanica, at the Gare du Nord and helping her navigate to the Gare de Lyon as she returns home from a visit to England:

As the train began to move she said brightly:

"My husband tells me you have been visiting friends in England."

The subdued violence in the woman's voice aroused Isabelle's interest. It suddenly struck her that what she had taken for an ill temper was nothing but a contraction of the facial muscles against tears.

Isabelle learns how difficult it has been for Madame Slanica to get a visa at all:

Isabelle's voice was as low as she felt existence would be with no Paris, no Rome, no London, no New York, no Madrid. Lives without pictures, she thought--and, for the first time since her girlhood, it occurred to her that what she considered romantic love was not the only thing in life worth having.

And it emerges that Yugoslav policy is that a husband and wife can never be granted visas at the same time. Hence the title of the story:

"What about your husband? Does he care for travel?"

"He loves to travel." The sallow face flushed unbecomingly. "As a student he travelled very much. And of the books left us more than half are travel books. Every evening almost we look at them, and at the maps--planning journeys we shall never make--"

It’s quite an opening for the collection, and a perfect distillation of Stirling’s themes--the glamour and sophistication of the haves confronting the losses and complications of the have-nots.

Even more gut-wrenching is the collection’s final story, “Lili Marlene,” which traces the very different fates of three French sisters during WWII and in its aftermath. One marries an officer in the Vichy government, one becomes a heroine of the Resistance, and the third is doomed by her vulnerability to love.

We also get the usual glimpses of theatre life, no doubt drawn at least partly from Stirling’s own family and early life. In “The Old Turtle”, a dresser observes the love life of the actor he has served for thirty years. And in “The Prisoner”, a young prisoner of war finds his future while putting on a play with a fellow prisoner who is a professional actor. 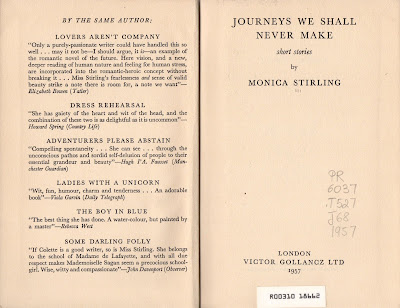 There are several stories about changes in romantic feelings triggered by music, random reminiscences, and ordinary behaviors. In “Bread Alone”, a selfish wife’s eating of her husband’s sandwiches may well determine their future as well as that of another couple. In “The Labyrinth”, an error involving letters to two different women saves a young man from inevitable disappointment. And in “Love in the Third Person”, a French woman reluctantly agrees to have dinner with the American soldier she had befriended ten years earlier.

The most humorous story in the collection is “The Night the Nurse Got In”, about a young wife and mother who suddenly and dramatically falls ill with polio. I know, it doesn’t sound like much fun, but the narrator’s sensibility is often so funny that it’s hard to recall what a near-miss she has. My favorite line is when she is first falling ill:

It had been a nasty day and the cold with which I'd gone to bed was worse. There were spots in front of my eyes, eerie whistles in my ears, and I no longer loved my children.

Not long after, her children arrive home:

At tea-time my children burst joyfully in with the news that their petite camarade Camille had been sick during arithmetic. I eyed them wearily. Tomorrow I had better ask Unesco about homes for backward children.

And then there are her observations about her smug, knitting nurse:

"We all have our troubles," click, click, "don't we?" she said with relish. "Rich or poor, young or old, we can't escape indefinitely, can we?"

Again I was reminded of school: preparations for examinations, references to the ubiquitious examiner who might trip us up on this or that sly question. Was life a series of booby traps? Looking at the nurse, I felt that it was--and it struck me that the popular conception of the knitting revolutionaries around the guillotine was inaccurate. They had not, probably, been furious harpies, driven by conviction to yearn for blood, but comfortable, knitting home-bodies, anxious to convince the severed heads that we all have our troubles.

Most of the stories aren’t as funny as this, though there is very often a wry sensibility that charms.

I’m really looking forward to Stirling’s other story collection now. And perhaps it would be wise to do some digging for any stray stories that appeared in magazines and never got collected? Add that to my things to do list. But for now, it will be on to another of her novels. I’m thinking it might have to be Lovers Aren’t Company, her 1949 debut, set in immediate postwar Italy...

Posted by Furrowed Middlebrow at 7:36 AM