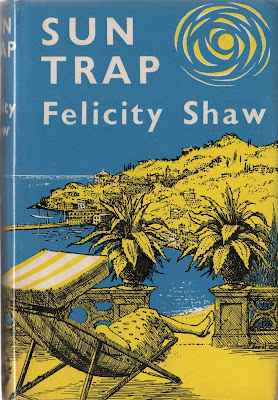 As Isobel waited with the small group of passengers on the sunbaked tarmac at Beirut, to embark on the final stage of her journey, she thought, as she invariably did in such circumstances, that she had been provided with some sad specimens to accompany her through the last hours of her life.

This is the opening paragraph of Felicity Shaw’s second novel, and her last for more than a decade until she returned to publishing in 1970 as “Anne Morice”. I love this opening because I have that exact sense of dread every time I fly (though it has somehow lessened a bit as a get older--maybe I just figure "eh, I've had a good life, if we crash we crash"). Also:

At the end of every runway she visualised a high brick wall and, during each take-off, sat frozen into immobility as the plane raced towards it.

Isobel Pawley and her daughter Fiona are flying from Beirut to an unspecified island in the Mediterranean, to which her estranged husband Adrian, a painter, has retreated, and where her old friend Noel works in some vague form of colonial or diplomatic service. Isobel, nervous and insecure, is visiting purportedly to ask Adrian for a divorce, but really in the hope that he will suddenly discover that he can’t live without her. Noel, concerned about keeping up appearances in their small, village-like community, urges his fearful, slightly ditzy wife Laurette not to reveal their guest’s true identity, with the unexpected result that she, in a moment of panic, tells the wife of the “commissionaire”, the wonderfully officious Mrs Hancock (one of those delightful Lady Boxe-like characters that I adore, even if she’s very much a stock character), spontaneous lies about Isobel that further complicate a fraught situation. Rounding out the cast, and frequently adding to the confusion and misinformation, are Hugo Lessing, a wealthy friend of Adrian’s and Noel’s, Grizelda Blaikie, a sophisticated, alarmingly self-possessed guest of Hugo’s who, it emerges, wreaks havoc wherever she goes, and Mr Reed, a journalist who turns out to be a well-to-do nob.

Isobel hopes to encounter Adrian in a controlled situation, where her poise and elegance will impress him with how much she’s changed from the clinging, controlling wife he remembers. But her plans are gloriously foiled when, believing Adrian safely out of the way, she arrives with Noel and Laurette at an elegant party given by the Hancocks, only to find Adrian standing across the room with the glamorous Grizelda. Spoiler alert: she does not react in a poised and elegant way:

For a second, she stared, rigid and almost insensible. Then, in the next instant, noticing the outstretched hand and struggling to regain her poise, she grasped it with an eagerness more excusable in a drowning woman, clutching at a raft, than in a guest being welcomed by her unknown host.

Mr. Hancock, who could barely have expected that his hand would be called upon to bear her full weight, had not put forth sufficient strength for the burden and, instantly, she was in the position of a drowning woman who has clutched at a raft, which has turned out to be made of paper. She lurched a little, tried desperately to recover herself, lost her precarious balance on her spindle heels and reeled forward on top of her astonished host.

Sun Trap seems to me not so outright hilarious as Shaw’s earlier novel The Happy Exiles (reviewed here), though it’s still quite funny and perfectly addictive reading. But it is also perhaps a more polished work, Shaw having fine-tuned her plotting a bit with her second effort. The atmosphere of colonialism is less prevalent here too, and there’s barely a mention of the actual work Noel and the Hancocks do or of “the natives”. It’s simply a rather daft romantic comedy that happens to take place on a Mediterranean island.

And although Shaw clearly wasn’t setting out to write Madame Bovary, I think there’s a bit more subtlety and even poignance in some of her characters, particularly Isobel, who does evolve in the course of the novel (though just possibly in the wrong direction, judging from the rather double-edged ending), and poor Laurette, who is a rather sad figure despite being the highly effective butt of a good many jokes:

She was a small, fragile creature, with huge, dark, haunted eyes, and it was reasonable that they should be so, for Laurette, as far as anyone could tell, was a haunted woman. She was haunted by the fear that her children would contract rare and fatal diseases, that she would be snubbed by Government circles, that her husband would run away and leave her penniless and disgraced, that her servants were laughing at her behind her back and by a great many other true and baseless terrors, to all of which she gave constant and eloquent expression. The only fear to which she had apparently become reconciled was that of boring her friends.

It’s all quite entertaining, at any rate, and although one wouldn’t want to have had to do without the Anne Morice novels, one does also rather wish Shaw had also kept writing novels like this one--Jane Austen crossed with Evelyn Waugh.

Finally, a comment from Adrian on what he thinks Isobel wants from him as a husband and father:

'She wants me to have a season ticket and vote Conservative and run in the father's egg and spoon race.'

'What on earth is that?'

'A terrible thing that occurs at the school sports. It has been specially devised by man-hating schoolmistresses for the purpose of degrading fathers before their wives and children.'

Posted by Furrowed Middlebrow at 9:33 AM