"You must hear our siren, it's the loudest in London": NAOMI ROYDE-SMITH, Outside Information (1941) 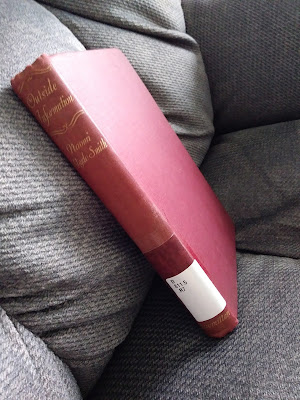 At Truslove and Hanson's, where I bought a pocket Bible, only to find later that the Club had added a larger copy of this anthology to the telephone books by every bedside, the voice of the siren was not unwelcomed by the assistants, who retreated carrying armfuls of the newest books and browsed on them unmolested by customers.

The full subtitle of Naomi Royde-Smith's diary/memoir of the Blitz reads "Being a diary of rumours collected by Naomi Royde-Smith, together with letters from others and some account of events in the life of an unofficial person in London and Winchester during the months of September and October 1940." Whew! It's a slightly unusual approach to a diary, so perhaps Royde-Smith or her publisher felt the need for some explanation, or perhaps she just found it amusing to go into such detail on the title page. Either way, it's an irresistibly entertaining book with new perspectives and new revelations even for someone like me, priding myself on having read a substantial amount about the Blitz.

Because the author set out to keep a "diary of rumours", or an "accurate account of inaccurate information", we are given a unique localized perspective on how people were reacting to the stresses, anxieties, and confusion of the earliest days of the Blitz. Early on, for example, we get her account of a morning spent repainting chairs, during which an odd odor of frying onions reached her; she later learns the aroma had triggered a gas alarm and the town's air raid wardens had been mobilized, only to discover that it originated from a fire at a pickle factory. 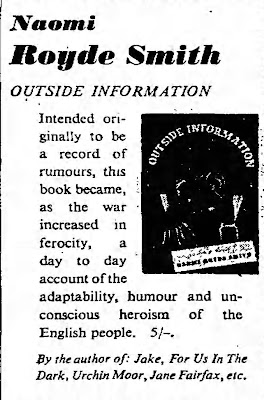 Sadly, of course, not all the rumours have such benign origins, and of course in between Royde-Smith's reports of rumours we get quite a lot of factual detail, some humorous, some distressing, of the early days of the Blitz. Her own experiences are supplemented by the inclusion of various letters from friends—all with a flare for detail—including in one case novelist Margaret Kennedy, reporting from Cornwall. And although the author is living, during the months of her diary, in Winchester, her husband is working in London, so she makes a couple of harrowing trips to visit him. Thus, in addition to rumours, we get some powerful descriptions of London and "the strangeness of a city—not in ruins, but holding ruination in its arms":

The silhouette of Chelsea, South Kensington and Westminster remained intact in spire and dome and solid mass of steel and concrete mansions. The dome of the Tate Gallery had a rather shattered but quite unbent air; Dolphin Square and the Imperial Chemical Building stood pink and white in their customary blandness; not a shred of the mysterious cage which has shadowed the Victoria Tower for the last eighteen months had been displaced, only St. Thomas's Hospital showed any sign of the bomb which had wrecked the Nurses' Home and the dispensary and medical store and left the whole vast organization without a drop of iodine or a roll of lint to cope with the worst emergency in its history. The whole effect was of devastation, awful in degree, but unexpectedly limited in extent. I had not realized that the highest explosive bomb had so definite a bound set to its destructiveness: that it was less deadly to human life than the microscopic bacillus of typhoid or influenza.

Royde-Smith's surprise at the limited extent of the damage reminds us that many people had expected London to be effectively decimated within the first few weeks of bombing. (And yet Naomi still went to London to visit her husband!)

Here we encounter some of the common tropes of the blitz. There's ruins sightseeing and children collecting shrapnel. And there are some examples of "blitz spirit", as when a friend shares a letter she received from the mother of her evacuees, just returned to London from a visit to her children; she begins "Just a few words to tell you we arrived home safely Monday" and only then mentions that their home was bombed soon after: "We had five high explosive bombs around us, one took our house and buried us in the shelter in the garden, the police and A.R.P. men were wonderful."

And as Royde-Smith was already a very successful and widely-known novelist, there is just a little bit of tantalizing name-dropping:

When the All Clear sounded E. went across the street to his own room to sleep and I set out to have tea with Rose Macaulay at her flat. That dauntless woman's small second-floor drawing-room has very large windows overlooking a square. Elizabeth Bowen and Dorothy Nicholson came in before the second of the afternoon's raids began, but our hostess did not appear to have heard it. It was not her week on Ambulance duty. So we sat on talking, as writers will, of sales and royalties and of the books we wanted to write and couldn't and of how far the Catholic Church was responsible for the present muddle in Spain. E.B., who is worried about her Irish home, explained that Eire was perfectly ready to fight the Nazis so long as she could do it quite by herself. It's the idea of having to be anybody's ally that gets her down.

Not till the All Clear sounded did Rose take any notice of the outside world. Then she flung all the windows open and said, "You must hear our siren, it's the loudest in London."

Oh to be a fly on the wall during that tea! What, for example, were "the books we wanted to write and couldn't"??? 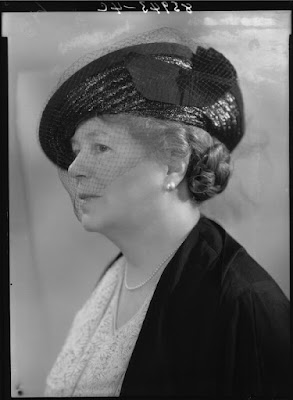 I should mention there is one bit of casual anti-semitism about the author's involvement with an "enemy alien" who arrived late one night having "lost her luggage and her passport and, being an Austrian-Pole, as well as a Jewess, was more than temperamental about these and other misfortunes during the ensuing months". Ummmm. Perhaps her being "dramatic" in such circumstances had much to do with having left her home and country under terrible conditions and little to do with her nationality or race? One knows more or less what Royde-Smith probably meant, and she is perhaps speaking from her experiences with the woman over "the ensuing months", but one would still rather like to give her a couple of good squirts with a water pistol for the insensitivity.

One final tidbit that I'd never come across or thought of until reading this book. The author shares a letter from a friend living in neutral Switzerland, who tells of the Swiss growing tired of all the air raid alerts there because of RAF planes flying over on their way to Italy. Indeed, according to Wikipedia, " over 7,000 siren alarms were initiated in Switzerland during the war." Who knew? I wonder if there are any good memoirs of life in Switzerland during the war, or would they have been seen as too anticlimactic compared to memoirs from most other parts of the world?

This is a book of more or less spontaneous reportage from some very dramatic times, and so it lacks the polish and the considered perspective of a masterpiece like A Chelsea Concerto. But for the same reason, it has a certain immediacy and rawness, and the irresistible fly-on-the-wall perspective of people who couldn't know what their future would hold and nevertheless went about their lives in much the same way as always. And whatever her faults might be, it's hard not to be charmed by someone who, having declined to go to the shelter of her London club, decides to enjoy the view of the barrage from her 5th floor window:

Why, since I had refused to take a pillow and an eiderdown to the basement, as all the other residents had done when the barrage grew noisy at bed-time, should I cower alone and not see what those were missing? It was worth it and indescribable. Sights like sounds; sounds like the long, steel-bright swords that crossed one another; a buzzing as though each visible star not like an angel but a demon sang; little white scratches that flicked in the patch-work and did not synchronise with the tearing noises which came and went amidst the general din, and, low and far to the east, a peach-red leaping where the docks still beaconed to the returning pilots who had lit the fires two nights ago. I gazed at it with no more thought for the skill and courage, the agony and daring, behind, above and below these portents, than you or I ever give to the scene-shifters, the electricians, the dressers, property men, stage hands and noises off, who work behind the scenes when we watch Grand Opera or a pantomime.

Clearly, I need to finally pull the trigger and sample Royde-Smith's novels (26 in all, I believe!). Any recommendations of the best place to start?

Posted by Furrowed Middlebrow at 8:53 AM