I am not widely known for my concision, but I'm going to do my best here as I have a number of books I've read in the past several months about which I want to share some impressions (since it's quite possible no one else has read them in a few decades!). 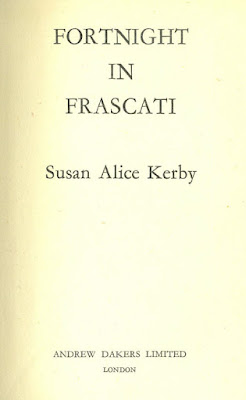 First up, Grant Hurlock made it possible for me to read Fortnight in Frascati (1940) by SUSAN ALICE KERBY, who is of course also the author of the Furrowed Middlebrow book Miss Carter and the Ifrit. Fortnight, set in Italy (presumably a couple of years before the book was published, since there are mentions of Hitler and Mussolini but not of war), follows an eccentric duchess and her wry niece, Marian, as they play host to an array of guests from the U.S. and England in reponse to the Duchess's advert in the Times. It's her unusual form of entertainment, and perhaps also her outside-the-box method of marrying off Marian, and the resulting guests include a psychologist, a American dancer who has just been jilted, a young shipping clerk, a middle-aged woman who has always lived in the shadow of her father, and a rather pompous young Poet.

At first the guests don't really click, but the discovery in the garden of what might be an ancient statue of Pan (or might have been ordered buried in the garden by the Duchess herself) brings them all together. From there, the story rollicks along enjoyably if unremarkably enough, and there's some fine good humor, some definitely bad humor, some enticing armchair travel, and a reasonably fun cast of characters. The Duchess is certainly an entertaining eccentric with rather a flair for matchmaking. I got a chuckle from her assessment of contemporary Germany:

"No, my dear, that's no country for me. I'm too much of an individualist. Besides, with my rheumatism, I couldn't go about heiling all over the place and raising my arm."

And one interesting tidbit in view of the profession of Kerby's heroine in Miss Carter:

"A feeble joke is better than one in bad taste," the Duchess said, with some acerbity. "Really, Marian, you should try for a post in the official censorship department, you have such a brilliant faculty for taking even the most innocuous bit of spice out of life."

Could Kerby have already, when writing this novel, have had some connection to the Censorship office? Elizabeth Crawford could find no information on Kerby's wartime work, but she seems to have had some sort of interest in this particular line of work, even if she didn't engage in it herself.

All in all, a perfectly pleasant novel, if a bit rough around the edges.

Now, having seen the delightful cover of D. A. PONSONBY's Dogs in Clover (1954), and knowing almost nothing about it, I know most of you will agree I had no choice but to purchase it. Ponsonby's main genre was historical fiction, often set in the Regency period. Of Bow Window in Green Street (1949), set in 18th century Bath, Twentieth-Century Romance and Historical Writers says "all the hopes and excitement of Regency living are wonderfully captured. One feels one could again knock on the door of the very house in which they all lived." Not being a big aficionado of historical fiction, however, I went with one of her very few works with contemporary settings. 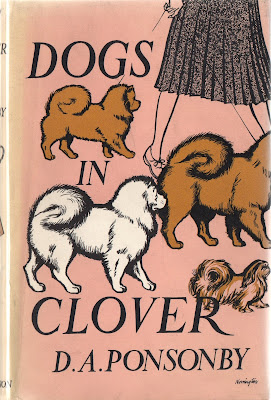 Novels about "fallen women" abound, but this might be the first about a fallen dog (or, more accurately in this milieu, a fallen bitch). The proud owner of a line of Chow Chows, who has paid dearly to have her pride and joy bred by a champion, is horrified to find, when the new litter arrives, ample evidence that the champion hadn't been, so to speak, first in line. Only one of the puppies looks like a proper Chow, but that one is magnificent, so the owner begins to show the dog despite her knowledge of its imperfect lineage.

Drama includes several dog shows, the Chow owner's arch-rival in competition who isn't above stooping to hanky panky to win her cups, romance between the owner's daughter and a shower of Irish setters, and difficulties in that shower's own family. It's mostly silliness, and there's some genuine fun in reading about the obsessions of the dog fanciers, though the ending is a bit weak.

Moreover, there's one scene early on in the novel that will be a deal-breaker for many of today's readers. The Chow owner, fresh from her dog's new litter of puppies, blithely returns to the house to fetch a bucket to drown the four puppies who don't have the right look. Her daughter, reacting to this, merely notes that she is glad she has not seen the puppies beforehand as she might then have felt sad about it.

One reviewer of Doris Langley Moore's Not at Home, reprinted as a Furrowed Middlebrow book, complained of the treatment of a dog in that novel. There, however, the dog's fate was meant to show its owner's terrible irresponsibility, and Moore obviously disapproves. Clearly, no actual dogs were harmed in the writing of the novel. In Dogs in Clover, by contrast, it is one of the main characters who drowns the inconvenient puppies with seemingly no authorial disapproval whatsoever. Add to this that we are told on the book's jacket that Ponsonby herself was a dog fancier, and one begins to wonder if she herself made a habit of inserting puppies into buckets of water.

All told, although drowning dogs might not feature prominently in her historical fiction, I don't think I'll need to be bothering with Ponsonby again any time soon. (I'm not sure if it's possible to "cancel" an author no one reads anyway, but I'm looking into it...)

Posted by Furrowed Middlebrow at 11:47 AM