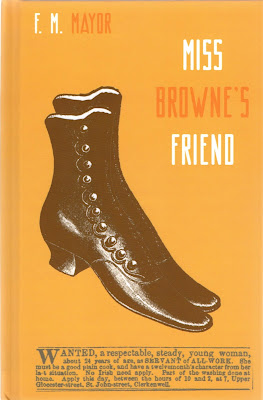 In almost every village in England a Miss Browne is to be found; in every town several Miss Brownes; in London they must be almost too many to count. We all know them, spinsters from thirty onwards, who are cheerfully devoting their lives to be of use and comfort to their families, their friends, their village, their town, and their country. Sometimes these objects of their goodness patronize them, sometimes they laugh at them, and sometimes they writhe a little under the benefits they are receiving; but they could not possibly get on without their Miss Brownes.

With this opening, there can be little doubt that we are back in the rich, slightly melancholy world of Flora MacDonald Mayor, who deserves, despite her relatively sparse output, to be considered one of the major authors of the 20th century. She's best known for her three brilliant, poignant novels of the lives of unmarried women in the early years of the century— The Third Miss Symons (1913), The Rector's Daughter (1924), and The Squire's Daughter (1929)—the second widely considered her masterpiece, though the others are lovely as well.

Apart from her three novels, Mayor seems to have published only three other works, which are almost entirely inaccessible. In 1901, she published her first book under the pseudonym Mary Strafford, Mrs. Hammond's Children, which has been referred to variously as a novel, a children's book, and a story collection for adults about children. Janet Morgan, in her intro to the Virago edition of The Squire's Daughter, refers to it intriguingly as stories “based on the relations among children and the kindnesses and cruelties they practise on one another.” (For what it's worth, the Glasgow Herald referred to it uninformatively as "A delightful set of pickles.") Regardless, unless you're in the British Library, you won't be able to read it.

Following Mayor's 1932 death of influenza and pneumonia, a volume of stories, mostly of ghosts and the supernatural, The Room Opposite, appeared in 1935. A small British publisher, Sundial Press, announced a reprint the better part of a decade ago, but it has never appeared and the original edition is hard to find indeed.

The third of Mayor's other works, described as "an exploration of a friendship between a suburban lady and a prostitute, published serially in the Free Church Suffrage Times”, Miss Browne's Friend had achieved more or less the level of myth for me. I was making plans, when the pandemic abated, to drive two hours to a University of California library that appears to have the Free Church Suffrage Times to attempt to copy it, when Michael Walmer emailed and announced the joyous news that he was reprinting it as the latest volume in his Zephyr Books series of classic short works (see here). Eureka! Rather a lot easier to retrieve it from the mailbox than to drive halfway across the state and fetch it off of microfilm. 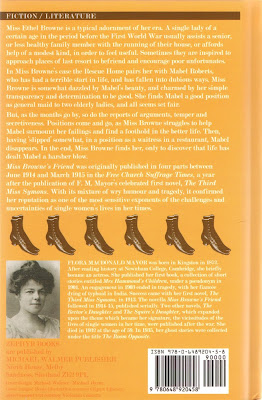 Divided into four chapters (presumably the parts in which it appeared in serialization), the book could be described as a novella, though it's really little more than the length of a short story. But it's not the size that matters (in this case at least), for it's a fascinating little work that offers insights into Mayor's feelings about the role of unmarried women—including herself, whose engagement, at around age 30, ended tragically after a few weeks with the death of her fiancé in India in 1903. (Another thing which makes Mrs Hammond's Children a work I would sell a kidney to get hold of is that it's the one surviving work of Mayor's which pre-dates this tragedy—is it therefore a more cheerful, optimistic book, or was a practical, slightly melancholy perspective on the world always Mayor's? It's a crime that there are still these missing pieces in the ouevre of such an important author.)

Ethel Browne, perhaps a bit bored with her role as unpaid servant for her mother and two married brothers, and with keeping "all responsibilities from a younger sister who went to the Slade", reads an article one day about a Rescue Home (presumably primarily dedicated to prostitutes, though in 1914 Mayor had to be a bit coy about her descriptions) and decides to volunteer as a friend to young Mabel Roberts. I love Mayor's description of the Sister who greets her on her first visit to the home:

A Sister in nurse's dress greeted her: a Sister who somehow put one in mind of angels, although one surmises that angels are as a rule radiant and victorious, and this little Sister was tottering not very far from the brink of a nervous breakdown.

Ethel is shocked, in her very sheltered way, to find that most of the downtrodden are not nice-looking, but she is pleased that Mabel is the exception, which will soon remind Ethel not to make assumptions about appearances. Mabel has lots of difficulties, moving from job to job, and one begins to wonder if she isn't merely telling Ethel what she wants to hear.

I won't go into further details about the vicissitudes of the women's friendship, but I will say that we get lots of lovely, subtle comment on class and morality and the position of women in the early part of the 20th century. And the reactions of Ethel's mother and sister to her new friend are worth sharing:

"I really think," said her mother on her return, "it's a waste of time trapesing after that girl, and in the rain, too. Besides, it doesn't seem to me quite what one likes—and when there are so many excellent societies just for that purpose."

"And it's so foolish, Ethel, because those girls like that sort of life."

This consolation came from her younger sister, who was just as ignorant as girls of twenty-two in the protected classes have always been, but was so pathetically anxious not to be Victorian.

Those sorts of sentiments can of course still be heard today among those who don't find it worth their time to understand the complex causes of the problems described on the evening news.

At any rate, Michael Walmer has done us a wonderful service in making this crucial missing piece of Mayor's career widely available again. He publishes lots of other marvelous books as well—see his main website here—so please do support his efforts and encourage him to do more. Perhaps Mrs Hammond's Children and/or The Room Opposite will be coming along soon???
Posted by Furrowed Middlebrow at 7:54 AM