The pretentious lady goes to Paris: MARTIN HARE, Diary of a Pensionnaire (1935) 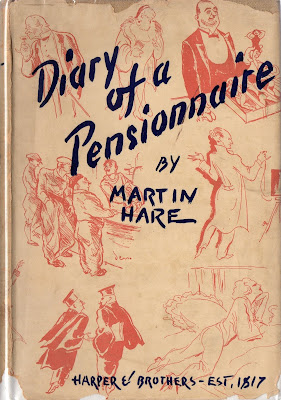 I'm beginning to wonder just how many novels there were which were inspired by the success of E. M. Delafield's Diary of a Provincial Lady and its sequels. Just among books I've reviewed in the past year or so, there's Maud Batchelor's The Woman of the House and Elena Shayne's Everyday, quite different books but both surely inspired by Delafield.

And then there's Diary of a Pensionnaire, by Martin Hare, pseudonym of Lucy Zoe Girling, married name Zajdler. Presumably based at least loosely on Hare/Girling's real life situation, the diarist is a woman who has been left in a Paris pension due to her Polish husband's being suddenly called back to Poland, and the novel is her humorous record of the habits and eccentricities of her fellow pensionnaires. It begins, rather promisingly:

Curious desire, said to be shared by practically all wives, to know what it feels like to be a widow, at last gratified as husband is removed for indefinite period by Paris-Warsaw rapide from Gare du Nord. I weep; Yasha weeps. Pretty French vendeuse, in overall of peculiarly repulsive pink, flirts with conductor who ought to be attending to Yasha's bedding, and sprays him with perfume from tray slung round neck. Unfortunately sprays me also but omits to apologise. Creep out of the Gare very dispirited, inadvertently leave new gloves in autobus, and regain suburban Pension, kept by old friend of Yasha's, where have been hurriedly dumped to await his return. Unsuspected, but characteristic, deficiency of necessary papers responsible for inability to enter Poland with him at twenty-four hours' notice. No expectation of sleep.

(Of course, the next entry then begins, "Convinced of extreme personal heartlessness by excellence of night just passed.")

Thus on page two I was settling in for, at the least, an entertaining evening or two of amusing Delafield-esque humor. Even if it doesn't match up to Delafield herself, I thought (and none of these books really do--when the gods created the provincial lady, they threw away the mold), it must certainly be entertaining and good for some chuckles, right? I mean, how bad could it be?

And there were indeed some chuckles:

Interesting discussion during dejeuner as to surgical processes undergone by various music-hall favourites. Quiet Gentleman who takes patent medicine before each course declares that a certain lady has had les seins lifted so often that le nombril is now completely lost to sight. Cannot believe this to be true.

And the afternoon our lady spends with a school friend's joyless daughter Vera, who feels that "the true object of life is to Pass on Happiness," is suitably provincial lady-esque. ("Should like to tell her that she has certainly not Passed on Happiness today, but refrain.")

But, like in one of those eerie films where someone goes to an idyllic locale that initially seems perfect before little distressing things begin to happen, it soon became clear that something was a bit off with our pensionnaire. It might have been when she goes out shopping and finds her cheerful mood fading when she realizes that the men around her are paying her insufficient attention (though she assures us they always do when her husband is around). Or perhaps it's when she discovers that two friendly women who share a room are lesbians and is clearly distressed and worried that they are interested in her--though not worried enough to avoid them, as this presents her with a

unique occasion for finding out How It Is Done, which does not sound so morbid an enquiry in French language as in English. Blonde lady, when sounded, as veiled and unilluminating as all the books I have ever read on or around the subject.

And then there are the instances of what I found more poor taste than humor, as when the pensionnaire spots what appears to be a dead dog floating in the Seine, or her ongoing speculations about an elderly woman under whose chair there is always a mysterious puddle ("Must ask somebody what this can be, as it surely cannot be what it most resembles."). Was an elderly woman's incontinence widely considered hilarious in 1935?

In short, I managed something like 100 pages before realizing that the small bits of genuine humor here and there were far outweighed by my overall distaste for a narrator who always manages to feel superior to those around her. She is, I realized, the opposite of Delafield's wonderful, self-effacing heroine. In Delafield, the humor is in the diarist's own inability to fit in or maintain grace under pressure, something many of us can relate to very much. By contrast, our pensionnaire is always the one who's right, and those around her are merely ridiculous or embarrassing, and quite inferior. I don't relate to that at all.

Far from making me feel cozy and comforted, this book was entirely bad for my blood pressure. Which just goes to reinforce yet again what a delicate balance this sort of writing must maintain, and what a genius Delafield herself was.

Some of Hare/Girling's other novels sound almost as irresistible as this one sounded in reviews. It looks like I also have If This Be Error (1934) on my shelves, as well as Polonaise (1940), which I attempted once years ago and got side-tracked from (I don't recall actively disliking it, just happened to put it aside). So perhaps I'll see if either of those work for me. But I can't say that Diary of a Pensionnaire has inspired in me any particular eagerness to be inside this author's head again...

Posted by Furrowed Middlebrow at 7:09 AM