Well worth a migraine or two: MOLLY CLAVERING, Touch Not the Nettle (1939)

You might recall (well, I kind of hope you recall) that a few weeks ago I announced the nine new Furrowed Middlebrow titles coming from Dean Street Press in June. I’ve reviewed most of the new titles elsewhere, but it’s those I’ve never got round to that haunt me.

In particular, having had the astonishing good fortune of finding a copy of Molly Clavering’s Susan Settles Down on eBay, I have to try to convey the excitement not only of getting, not too many months later, to read Clavering’s other three delightful Scottish comedies from the 1930s--Love Comes Home, Yoked with a Lamb, and Touch Not the Nettle--but also realizing (and letting out a giddy shriek that sent Andy through the roof, no doubt) that the last was a sequel to Susan. 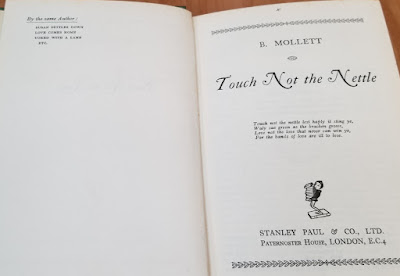 To set the scene a bit, I’ve had a lot of excuses over the years for not getting round to writing about books, but these three did pose their own unique challenges. Without going into detail about the circumstances, and never mind how much indebted I am to the diligent soul who undertook this task, these books actually came to me photographed--meticulously, patiently, heroically, self-sacrificingly snapped, page-by-page, in some sacrosanct library which shall remain nameless (I didn’t ask which one, but the options are very limited), probably in violation of library policies (though I’m not entirely sure why that should be). These photos were carefully quality-checked and then compiled into three staggeringly large PDFs, which I was able, with some difficulty, to read on my Kindle.

Because the photos were presumably taken with at least a certain amount of surreptitiousness, they were shot at an angle, close to the desk they were resting on, meaning the top lines of each page were rather small and the bottom lines were large. But they were all readable, which was the only thing that really mattered, and what’s an occasional migraine in exchange for getting to read a Molly Clavering novel I never thought I’d so much as glimpse? They’re all terrific, but of course the high point was when I first opened Touch Not the Nettle and discovered familiar characters that I could hang around with for another 250 pages!

The most frustrating part of the reading process, actually, was that I’d be completely engrossed and wanting the book to go on forever, but my eyes would reach an absolute saturation point having read about 50 pages this way on any given day, so I would have to stop in media res, yearning for more. Other books, however good, paled by comparison.


Of course none of this is really a good excuse for not making decent notes as I read and being able to write proper reviews, but I’m afraid my enthusiasm for reading the books got away from my blogging instincts. However, I have just unearthed, as I’ve been sorting through the debris of the past few months and trying to get on top of things again, two quotations from Touch Not the Nettle that I had made notes of. Hopefully they’ll give a hint of what my undoubtedly brilliant full-scale review would have contained…

First off, Susan and her friend Peggy are discussing how difficult it is to get good help these days:

“Well, never mind her, Susan dear. There’s no need to worry about superior parlourmaids here,” said Peggy. “I’ve got a new house-tablemaid, like a young cart-horse, and about as destructive. She only came five days ago, and she’s broken something every day. And yesterday I told her she was to wait at lunch, and what do you think she did? Shut the dining room door, pulled out a chair, and sat down on it—to wait! Of course, Oliver began to laugh, and I had to tell her just to go away. She has done one good thing, though, and that was to smash the awful vase that the Miss Pringles gave Oliver and me for a wedding present. She managed that the day before yesterday.”

Peggy nodded solemnly, her blue eyes dancing. “It was in about seven pieces, so Oliver took them out to the tool-shed and pounded them to dust with a hammer.”

I still laugh when I read that. Subtle psychological humor it ain’t, but how often have I possessed items I would have liked to finish off with a hammer!

Next, if for no other reason I wish Clavering had written a whole series of novels about Susan so that we could have had more memorable visits from the ludicrous but intimidating Miss Pringles:

“Susan! The Miss Pringles!” she hissed, snatching the baby from his perambulator and flying with him into the house as if bloodhounds were at her heels.

The passionate desire for escape at any cost to which Peggy had so spontaneously yielded was a sensation all too frequently felt by acquaintances of the three Miss Pringles on seeing those notable women bearing down upon them. The Miss Pringles never merely arrived or came—their action was that of a small fleet of pirate vessels swooping on some rich prize and cutting it out from its attendant convoy.

Oh dear. One really wants a film adaptation to get a full visual.

But I’ll leave you with a quote from nearly the beginning of the novel, which reminded me that Susan was my kind of character:

“Old age really must be creeping upon me at last,” said Susan. “I find more and more that what I most enjoy is a quiet evening at home by the fire, with a book…"

Naturally, her quiet evening is almost immediately disrupted--by a visit from young Amanda, a relative whose ace pilot husband is missing (and none too sorely missed), complications with the embittered Larry Heriot and his spiteful sister Ruth, difficulties with the aforementioned, formidable Misses Pringle, and much more. Of course, it all works out in the end, but not before some distressing confusion, grave misunderstandings, and rollicking adventures. And in these early novels even more than the later ones, Molly Clavering offers vivid descriptions of scenery and local color throughout.

I’ve really grown quite infatuated with dear Molly, and I can’t wait for folks to get a chance to read more of her come June.

Posted by Furrowed Middlebrow at 7:08 AM