"He looks as though the police were after him": CAMILLA TRACY, Cousin Charles (1950)

"Look, Lydia, there's Charles running away over there. Shall we call him? Where is he going?"

"Into the woods. He looks as though the police were after him."

"Oh, I expect Cousin James has just been horrid to him again," Penelope said, turning the pony's head for another jump.

And Lydia, herself: "We'll say he's gone the other way if they come to look for him." For when all was said and done you had to defend that Charles. He was your cousin.

Camilla Tracy's charming, quirky, slightly uneven, one and only novel begins with Penelope and Lydia Goodwin visiting with cousins Thérèse Kelly (Tessa) and Charles Goodwin at the family estate of Campion. None of the girls particularly like Cousin Charles, who has a rather prickly personality, no doubt largely because of his emotionally abusive father, but there is a certain curiosity nevertheless, and they like his father even less. 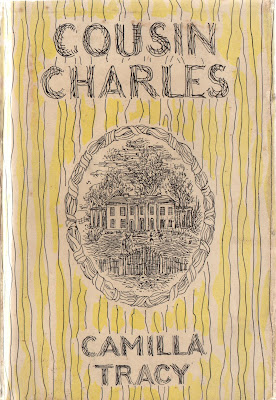 Campion is now owned by their quirky childless cousin Norman, who loathes all men out of principle, and his sister Eleanor, a classic delicate lady with a heart condition, and it's not long before we realize that speculation is already afoot about who his chosen heir will be. The family's relationships are dizzying—Norman and Eleanor's mother divorced their father and remarried, producing more sons, so that the family tree included at the beginning of the book is essential indeed. (Surely, there must be an autobiographical element there—it's hard to imagine a first-time author producing such a complex cast of characters.) But the only other characters who really feature centrally are Norman's mother, Isabelle Kelly, who has been residing in Paris with her artist son Frederick and his daughter Tessa, and Hamilton Sheppey, the son of Norman's solicitor, who befriends Tessa and harbors undisclosed romantic feelings for her, and Miss Yates, initially a governess and then a sort of companion/housekeeper to Norman.

As Isabelle and Frederick lead a rather bohemian life and Tessa is beginning to grow up, they ask Norman to take over her care. From there, the novel makes sudden leaps forward in time, to the period of Tessa's coming out and her first balls, around the time that Isabelle and Frederick relocate to London and come back into her life, and then, with nary a mention of approaching war, to the very end of WWII and beyond. Lydia becomes a journalist, Penelope marries and has children, Tessa becomes more intrigued by Charles after he nearly marries an heiress but drops her at the last moment, and then succeeds in making his own small fortune.

In some ways, it's rather a muddle (and no doubt this muddled summary makes it sound even more so). It was difficult for me to get a handle on what the novel was actually about, though there were lots of charming and sometimes very funny passages. There is always, in the background, speculation about the future of Campion, and it emerges that Charles has his own ambitions about the property, but ultimately I don't think its main concern is with money matters. It seems, like so many other novels of the period, to really be about the symbolics of grand old houses and their gradual deterioration. Among the obscurities I've reviewed and/or that we've reprinted, Rachel Ferguson's Evenfield and A. M. Champney's Miss Tiverton Goes Out cover similar ground, as do even works as varied as Gone with the Wind and Rebecca.

It's also very much about nostalgia. Penelope and Lydia have fond memories of times spent at Campion, but view it primarily from a practical standpoint. Tessa, who spent the last part of her childhood there on her own, sees it as a place of isolation and comes to dread the house. Norman primarily treats it as a gift he will bestow on the most deserving person (though his final decision is the least practical of all the options). But for Charles it's something very different. Victim of a bullying father (also a good-for-nothing, gambling, manipulative freeloader), Charles found some of his only childhood happiness at Campion, where he could elude his father for long periods of time. For Charles, Campion symbolizes the possibility of happiness and represents the key to finally escaping his father's influence once and for all.

There are some really amusing passages here and there. For instance, Charles teaching Tessa the basics of ballroom small talk at her first ball:

The wailing throb of "Night and Day" carried them round the room again, then Charles, a little absently said: "Been to many dances lately?"

She had dealt with this six times already during the evening and answered mechanically:

"That's quite the wrong answer. You ought to say: 'Every night this week—I'm really too exhausted to crawl.'"

"Is it really your first one? Are you enjoying it?"

"That's all wrong, isn't it?" he said, tightening his hold on her. "You ought to say the band's rather bad or just drawl: 'Are you going to the Poglingtons to-morrow?' or something like that."

"Me? Oh, I don't bother to answer. Why should I? I yawn and start talking to someone over my left shoulder."

"Do you? How very polite. Then what do we say?"

"Nothing. We have four minutes' silence. Then probably if I'm feeling very garrulous, I say, 'Been to any good shows?'"

"I suppose I wouldn't be allowed to like any of them if I had?"

"Certainly not. They're all too frightful for words. After that the conversation dies down again."

"We don't seem to be getting on very well, do we?"

"We're getting on beautifully. If either of us said anything more original the other would drop dead from shock."

But the only character I felt really attached to here was Lydia, and it's on her the other two passages I'll share focus. First off, how I relate to the demon that haunts her appearance:

Lydia seemed to have changed very little, Tessa thought, when Hamilton brought her to the house three-quarters of an hour later. Her hair was now cut short, but her dark eyes were still popping with curiosity, and she was—as she always had been—slightly untidy. But this she explained later was no fault of hers. She invariably started from home immaculately neat, but she had been haunted all her life by a personal demon who unhooked her clothes, loosened her buttons and disordered her hair before she arrived anywhere. There was nothing to be done about it unless she got herself exorcised.

And then there's the mystery novel she proposes to write:

"It's the hardest thing in the world to do—you have no idea what you're scoffing at," Lydia said, leaning across the table and forgetting to eat. "And mine's going to be in the highest tradition. I shall have an Oxford don for the detective, quoting such obscure poetry that nobody will be able to recognise or understand it. Then my minor characters will be so whimsical and engaging that every time one of them speaks, you'll shake with laughter and dissolve into tears simultaneously. The murderer—no, I think the murderess—will be an old lady of ninety-five who collects variegated seaweed."

I'm sure I'm not the only one who rather wishes Camilla Tracy had proceeded to write just such a mystery!

It's all a bit uneven, though such high points make it a pleasurable read. It drags here and there, as the plot seems to meander, but bang! the ending is really quite effective, and ties things together tidily. All in all then, if Cousin Charles isn't quite a buried treasure, it was still well worth a bit of digging to retrieve it. And that cover!

By the way, I hadn't done any substantial research on Tracy until after finishing the book. Her real name was Vera Benedicta Gage, born in London in 1899, and her teens must have been difficult, as she lost both of her parents (father in 1912, mother in 1916). On the 1939 England & Wales Register, she is listed as an artist, married to one Francis L. Birch. And her gravestone (in St. Peter's Churchyard in East Sussex) reveals that she was an Honourable, daughter of the 5th Viscount Gage. She lived until 1983, and it's rather sad she apparently never picked up the pen again.

Posted by Furrowed Middlebrow at 10:38 AM