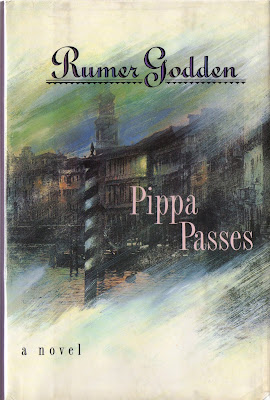 As a general rule, I love Rumer Godden so much that, as the kids these days say, I can’t even. And I have to admit that, even though I know from past experience that late Godden is not everything that mid-career Godden was (see my brief mention of her final novel [along with an excellent mid-career novel] here), I still had high hopes for this one. Widening world story, talented young ballet dancer making her way, a touch of romance, and Venice. What could go wrong?

Pippa Fane is 17 and with London's Midlands City Ballet, a school and dance company just building its reputation with an Italian tour, first stop Venice. Pippa has been selected for the corps de ballet, but the ballet mistress, Angharad Fullerton, sees bigger possibilities in her (in more ways than one, alas), despite the company director Humphrey Blair's occasional reluctance.

Pippa is immediately overcome by the romance and beauty of Venice--and then by the romance and beauty of Nicolò, the young gondolier she meets on her first night (and keeps serendipitously encountering everywhere she turns). Nicolò is of relatively humble origins, but conveniently speaks fluent English and has impressive connections as the private gondolier and protégé of a local Marchesa (the latter one of Godden's classic imposing women with hearts of gold), though his motives for romancing Pippa are mostly about the uses he can make of her in his pop band. (Pippa is a savant, as blessed as a singer as she is as a dancer.)

The novel begins much like a Mabel Esther Allan story—luscious setting, innocent girl (almost preternaturally innocent, in fact, considering the novel was published in 1994—Godden seems to have believed teenage girls hadn't changed since the 1950s), hopeless romance, golden opportunity thanks to an injury incurred by another dancer. It's quite charming, and initially reminiscent of Godden's earlier classic about a ballet school, the postwar A Candle for St Jude, which I loved and reviewed in the same post linked above. 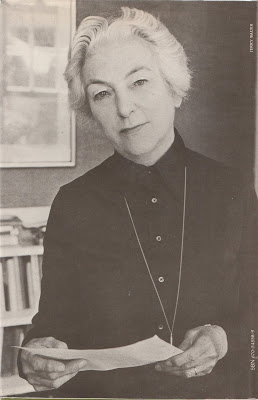 To some extent, too, the novel continues to read like it's from the 1950s rather than the 1990s, and if it had maintained that old-fashioned appeal, I might be giving it a thumbs up right now. But it’s very much as if some sleazy publisher read Godden's original manuscript and demanded that she "sex it up" in order to sell to 1990s readers. (Come to think of it, that might very well have actually happened.) Sadly, she took his advice.

It's clear from early in the story that Angharad, the dance mistress, has eyes for Pippa (and has apparently been infatuated with other young students in the past, as Pippa's friend Juliet tries to warn her):

'I understand myself only too well,' Angharad would have said had she been honest, and she seemed to see Pippa that morning as she had been in Angharad's bi-weekly class: 'lissome' was the word that came to Angharad for Pippa, lissome but strong; her skin had the cool smoothness of a petal. In Angharad's work she had, physically, to correct legs, arms, hands, necks and heads; it was a continual naked but legitimate touching - but Pippa's skin was so delicate that, 'Don't go into the hot sun,' Angharad wanted to tell her, knowing quite well Pippa would go into the sun. 'Well, the young throw away, with both hands, what they have.' Pippa's hair was brown - 'Mouse,' she would have said; Angharad knew how silky it was from when she had to alter the tilt of her head. Her eyes were deep blue and Angharad had seen how the long lashes curled against her cheek when Pippa, who had been so shy at first, looked at the floor every time Angharad came near her. 'And she works so hard and willingly in her efforts to please. If only she knew how she pleases me,' Angharad wanted to cry, but now in the office with Humphrey she managed to say, in her normal calm voice, 'Yes, I am keen. Call it instinct, Humphrey.'

Not a lot of doubt about what's going on there...

I can't really talk about the strangely conflicted nature of this novel without spoiling a climactic moment, so if you are eager to read the novel, by all means stop here (and come back to finish the post after you've regretted your decision…).

So, we know that Angharad is infatuated with Pippa. Well and good, if perhaps slightly creepy considering Pippa’s youth. But most Godden fans will be quite surprised when Angharad maneuvers to have Pippa stay in her apartment "for her protection", premeditatedly gets her drunk at a nice restaurant, and then proceeds to, we could euphemistically say, assault her, but in fact it seems clear even from Godden's relatively veiled language that it's a rape pure and simple. Pippa fights her off and escapes, traumatized and bleeding, not quite the passive creature our sexual predator had expected, and finds Nicolò sleeping in his gondola nearby. He takes her to the Marchesa, who comforts Pippa.

Now, what bothers me here is not that the novel includes a rape scene. Such things do happen, and Godden had every right to explore the issues (she had previously wrestled with prostitution in Five for Sorrow, Ten for Joy, and done so surprisingly effectively—and with far more of a modern sensibility and insight than in Pippa). It's not even that her compassionate approach to the victim (one of the Marchesa's first statements is "Poor Angharad") might rub some readers the wrong way in 2021. Compassion is entirely in keeping with Godden's philosophy, and is one of the things her fans love about her. (Though I might say that, again, the idea of a successful lesbian—in the ballet world, no less!—who is closeted and so desperately lonely as to rape a young girl, again suggests that Godden was not exactly up-to-date on the world around her in 1994).

But what makes Pippa Passes a bit of a train-wreck, in my opinion, despite it's lovely setting and a charming, if rather vaguely delineated, heroine, is the bizarre insertion of a Jackie Collins scene into a Mabel Esther Allan story (and the later scene when Pippa has sex with Nicolò, though less disturbing because consensual, is somehow almost as awkward and off-putting in Godden's elegant language, again as if she felt she had to move with the times). There's such a conflict between the 1950s-ish sensibility that dominates most of the novel and the 1990s salaciousness of these two scenes that the novel feels absolutely anachronistic and jarring. It's difficult to imagine any reader of the novel who would not be either irritated by the unrealistically naïve and silly Pippa, or startled or offended by the sexual scenes disrupting their otherwise cozy read.

All in all, then, my advice to Godden aficionados, or those who are only just discovering her, is to stick with (and savor with all the delight and enthusiasm they deserve) her brilliant work from the 1930s into the 1960s—Black Narcissus, An Episode of Sparrows, A Candle for St Jude, The Greengage Summer, Kingfishers Catch Fire, In This House of Brede, China Court, etc. There are bits and pieces of the Godden magic in her later novels, but go to the treasures first. And unless you’re particularly intrigued by the idea of the heroine of a girls’ school story being set down in the middle of a 90s Cinemax movie, keep your distance from Pippa Passes.

Posted by Furrowed Middlebrow at 12:16 PM