Credit where credit is due: DIANA SOUHAMI, No Modernism without Lesbians (2020) 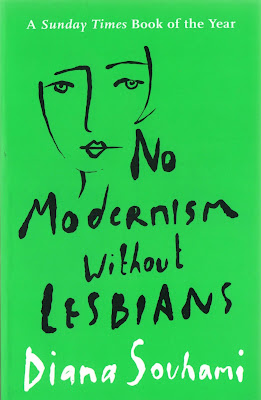 I had to write about this book here because it might have been written with me in mind, and if the assertion of its title at first seems like hyperbole, by the last page you'll likely feel that, if anything, it's an understatement.

My interest in modernism goes back to my first discovery of literature and what it can do. My love for Gertrude Stein knows no bounds. And I have a particular interest in women writers and other creatives who haven't gotten the attention they deserve. Of the four women Diana Souhami spotlights here, one is an author included on my British & Irish Women Writers of Fiction list, one is the founder of the most famous bookstore of the period and the first publisher of James Joyce's Ulysses, one was an American who inspired lesbian artists (and others) worldwide, and one, well, one is Gertrude Stein, always named as one of the most important writers of the period even by people who can't bear to read her.

As soon as I came across No Modernism without Lesbians while browsing Book Depository around the New Year, I ordered it, and it turns out I'm far timelier than I usually am in writing this post, as the American edition is due on May 1. Diana Souhami has made a brilliant career out of documenting the most famous and influential lesbian artists of the 20th century, including writers Radclyffe Hall and Gertrude Stein, painters Hannah Gluckstein and Romaine Brooks, and great-grandmother of Camilla Parker-Bowles, Alice Keppel, and her daughter Violet Trefusis, novelist and lover of Vita Sackville-West. Her latest book clearly stems from the boundless research she has done on lesbian life, art, and culture in the first half of the century, and she seems to know everything about everyone who mattered during this period. 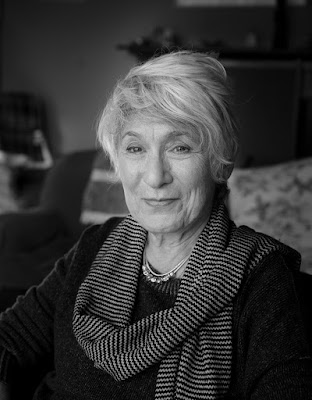 The first section of the book, about Sylvia Beach, was perhaps the most packed with new information for me. It's hard to believe what Beach—who had moved to Paris from the U.S. and opened the famous Shakespeare & Company bookstore across the street from her partner Adrienne Monnier's French-language bookshop—was willing to sacrifice of herself and her resources (and occasionally her friends' resources) in order to usher into print the greatest novel of the 20th century (according to the Modern Library), or at least the most famous and influential, and perhaps the most talked about and judged by people who haven't read it.

I confess that, having read Ulysses twice back in my foolish youth (undoubtedly without understanding most of it), I had rather expected never to tackle it again. But reading of Beach's passion for the book, her selfless aid to Joyce and his family (scarcely acknowledged and never repaid), and her unfailing belief that it was the crucial literary work of its time, so inspired me that I purchased a new copy of Ulysses—the extensively annotated Oxford World's Library edition, no less, weighing in at a bit over 1,000 pages. 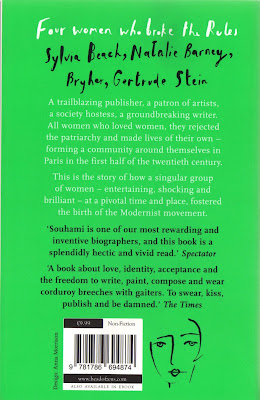 I thought it would be interesting to see how I would experience it now, a hundred years later. It's still on my TBR shelves at the moment, but even just sitting there, and even despite the fact that it must seem distinctly old hat for today's literature students, it still somehow has the power to make me feel a bit edgy and avant-garde. It brings to mind how modern fiction helped me to break out of oppressive small town life (not coincidentally, modernists often wrote about doing just that) and out of a soul-destroying family life (ditto many moderns), and how reading Woolf and Joyce and Hemingway and Proust gave me a much-needed boost to find my own way. I actually recall carrying Ulysses with me to a public swimming pool in Washington DC, aged 25 or 26, presumably imagining that folks around me would be impressed, when of course most of them had surely either never heard of the book or had read it and merely thought it odd reading for poolside. Lord, what a little idiot I was, but also, how amazing the power of literature to change our lives and help us on our way. Flailing my way through Ulysses was part of what made me who I am today (however unlikely that might seem).

Also of particular interest was the section about Bryher, a fascinating figure whose excellent Blitz novel, Beowulf, I've mentioned here multiple times. Souhami mentions Beowulf only once, suggesting that Bryher was already at work on it during the Blitz itself, though it was not published until 1956. (I should note that Beowulf has now been reprinted in paperback and e-book—had that new edition not already been in process, it was high on my wish list for our WWII batch of books a couple of years back.)

But Bryher was much more than a novelist. Apart from her writing, her claims to fame include being the partner of American poet and novelist H.D. (Hilda Dolittle); helping Robert McAlmon finance the Contact Press in Paris (first publisher of an extraordinary array of young modernists—including Ernest Hemingway, Gertrude Stein, Djuna Barnes, and William Carlos Williams); supporting James Joyce and his family before Joyce became world famous (what would Joyce have done without lesbian sugarmamas??); starting the experimental film company POOL; and lending financial support to Freud and the early psychoanalytic movement in Austria. This not to mention helping Jewish refugees escape from Germany in the years before WWII. I knew about many of Bryher's accomplishments already, but, supplemented by Souhami's revelations, I am in greater awe of her than ever.

Some of the interactions in No Modernism without Lesbians, and the accomplishments, will be familiar to even the most casual fans of modern art or fiction, but there are hundreds of little tidbits that I didn't know—connections I had never made, realizations that two things always encountered separately were happening simultaneously and shared much of the same energy. And in addition to Beach, Bryher, Stein, and Natalie Barney, the four women highlighted, there are cameo appearances by the likes of James Joyce (obviously), Djuna Barnes, Romaine Brooks, Dolly Wilde, Truman Capote, Marlene Dietrich, Janet Flanner, Greta Garbo, Radclyffe Hall, Winnaretta Singer, and Violet Trefusis, among others.

NMWL will make fascinating reading for anyone who enjoyed Square Haunting, The Love-Charm of Bombs, or other similar evocations of creative folk sharing the same swirl of cultural upheaval, and influencing, inspiring, and even repulsing one another in the process.

Posted by Furrowed Middlebrow at 5:52 AM