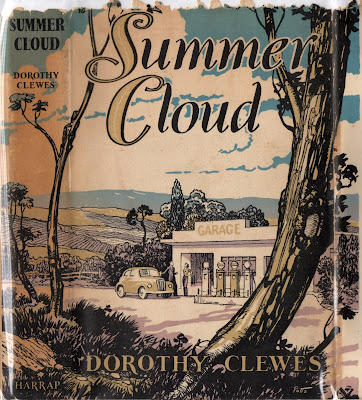 Most of you who recognize the name Dorothy Clewes at all likely know her only as a children's author, best known for The Adventure of the Blue Admiral (1955) and other adventures and mysteries featuring the Hadley family, or perhaps for a series of "wild wood" stories beginning with The Cottage in the Wild Wood (1945). She continued to write children's fiction until at least the late 1970s, more than half a century after her one and only school story, The Rivals of Maidenhurst (1925), which Sims and Clare call "an extraordinarily bad book" but nevertheless delineate its unintenional delights. (That book, published under her maiden name, Dorothy M. Parkin, was written when the author was only 17, so she can be forgiven for her lack of polish.)

I don't recall why I suddenly took an interest in Clewes recently. I know she hadn't been on my endless TBR list for long, which probably means I either stumbled across an ad or review that intrigued me or decided to give her a try after one of my occasional shuffles through my author list. I actually first read Summer Cloud (1951), because I came across a reasonably-priced copy with an intact dustjacket, but here I'm going to mention the three I've read so far in chron order.

Clearly Clewes started her forays into adult fiction with romance, and by her third novel (or possibly second, as Shepherd's Hill was also published in 1945), To Man Alone, she was still using the formulas of that genre but was already rising above it with the vividness of her background and careful attention to her characters.

It's just after the beginning of World War II. Margaret English is 36, unmarried, living at home caring for her supposedly "delicate" mother, and feeling frustrated to not be doing her part in the war effort. Then, of course, fate steps in:

There was something lying on the seat when she opened the door. It was a paper—an advertisement. She picked it up, got into the car, and read it as she settled herself behind the driving wheel. YOU DRIVE A CAR, it said, WON'T YOU DRIVE AN AMBULANCE? DRIVERS ARE URGENTLY NEEDED. ENROLL TODAY. OFFICE: 34, THE HIGH STREET, BROOM HILL.

Against the wishes of her mother, who wants to keep her as an unpaid servant, Margaret volunteers, just in time for the Blitz. Soon follows a bumpy relationship with Harvey Stevens, a doctor at the hospital to which Margaret often drives patients, who is slightly disabled to a childhood injury and ridiculously defensive as a result. A charming family friend, Mrs Mallory, puts Margaret up when her parents choose to evacuate, and is also conveniently equipped to facilitate Margaret's romantic life. I liked her description of her maid Sarah's reaction to her decision not to evacuate:

"She's so thankful we're staying here, she'd walk on the ceiling if I asked her to."

"She doesn't mind the raids, then?"

"She gets mad at them, but she's not afraid. It takes me all my time to get her to take cover when it's right overhead. I think she thinks that by defying it, she's winning the war all on her own."

Ultimately, To Man Alone is a fairly run-of-the-mill romance raised up by its Blitz setting and some surprisingly effective and suspenseful scenes of air raids. Clewes' talents are already on display here, though she's a bit too restricted by the traditions of the romance genre to give them free reign yet. 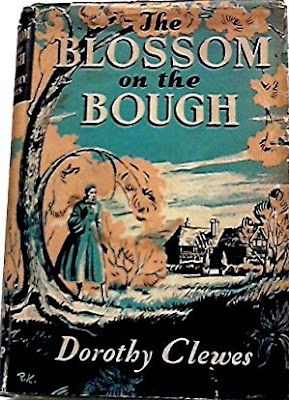 Better work was to come. By the time Clewes published her fifth novel, The Blossom on the Bough, she had happily left formulaic romance behind.

I didn't know what made me look down the property column of The Times. Perhaps it was that the 'peace' news was too depressing to read. I knew that I was sick to death of the food arguments, and of the long, dreary articles on what the Big Three said and to whom they said it, and of hearing how some sinister so-called iron curtain was spreading its shadows farther and farther across Europe.

From this opening, Lydia Meredith, a middle-aged single partner in a publishing house, sets out on a path which will lead her through memories of her earlier life, including family relationships and hardships, an ill-fated romance, and the tragedies of war. Longwood, her old family home in Kent, has come on the market after years of use by the military, and she feels compelled to go for a visit, which brings back a flood of nostalgic memories of her (mostly) happy life there, and the difficulties that led to the home's sale before the war. There was, of course, much of this sort of nostalgia at the time, particularly during and after the war when so many families had had to "downsize" (as we would call it today). Rachel Ferguson's Evenfield, written just a few years earlier, though stylistically quite different, details a similar compulsion to reclaim the past.

The bulk of the novel is a flashback to Lydia's earlier life, a structure I tend to find irritating but somehow didn't at all in this case. Clewes's characters come to life. They are mostly just ordinary people going about their more or less ordinary lives, but somehow Clewes makes the story compelling and lovely. Her novels are anything but rollercoaster rides, but for readers who like vicariously experiencing the ups and downs of likable characters' relatable lives, she is superb. The Blossom on the Bough is a completely charming light drama, and I suspect many of you would enjoy it.

But even better, in my opinion, is Summer Cloud. This lovely, addictive little drama—almost a soap opera but without the usual overstated melodrama—begins with Dr Charles Hamilton having a home consultation with Grace Soames and asking her to come to the hospital for x-rays. From there, the story expands—to Grace's husband and daughter Monica, who works for a dentist, Monica's sometime beau Fred, Fred's sister Lesley, an actress, and other friends and neighbors, as well as to the doctor's own personal dramas, including a bit of a scandal which threatens his practice.

Clewes' tale, again, is just about ordinary people living their lives and facing their fears and problems (really just about my favorite sort of story). But of course, some writers handle this type of story so immensely better than others. For example, I love how Mrs Soames copes with her daughter's choice of job:

She was a receptionist for a dentist in the town. While this elevated her above the masses who poured from the shops and the offices, it also demanded longer hours for very little extra pay. Monica didn't mind this: the job carried advantages that couldn't be paid for in money, such as putting her on speaking terms with the best people in Millington, and giving her a sense of responsibility and importance, which was what she needed. Mrs Soames was proud of Monica. She had only once called at Mr Watkyns' to leave a message, and Monica had opened the door. The white linen coat and the crisp cap had reduced Mrs Soames to speaking to her own daughter almost in a whisper.

One feels one quite knows a part of Mrs Soames' personality after this. Clewes makes us feel that we know her characters and are as involved with them as if we were discussing their lives over tea. Although I often get into trouble when I make comparisons, I can say that, in her best work at least, she's rather like a cross between D. E. Stevenson and Dorothy Whipple—a bit more serious than Stevenson's best works, but for the most part without the melodrama that Whipple sometimes sinks into. It's a lovely blend, and I certainly plan to read more of her work—and perhaps I should sample some of her children's fiction as well? Any recommendations?
Posted by Furrowed Middlebrow at 6:29 AM