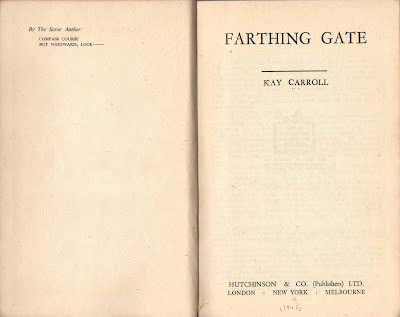 "[Y]ou'll adore it, my dear. You'll be crazier about it than I am, even. It's got all the kind of things you think important—atmosphere, and a thatched roof, and an old-world sort of garden; and all the things I think important, too; electric light and an Aga cooker and a marvellous cesspool."

You have to admit this is a promising beginning for a novel, at least if you are, like me, an aficionado of English village tales. And the fact that Delia ("Didi") Fitzallan and her sister Joanna are relocating to this idyllic-sounding cottage, along with Delia's sons Glen and Nigel, and Joanna's daughter April, in the midst of World War II while their husbands are off fighting, is merely the icing on the cake.

The cottage is offered to the sisters by Penelope Lane-Lambert, Joanna's godmother, to whom Joanna always refers as Aunt Penelope and from whom she hopes to inherit one day. But Aunt Penelope is sometimes a challenge:

Lady Lane-Lambert was an old girlhood friend of Adeline Brownleigh, the mother of Didi and Joanna. She was godmother to Joanna and an honorary aunt to Didi and Robin. She lived in the southern village of Finglehurst in a wonderful old Elizabethan manor; her husband, a silent, preoccupied man, performed adequately and in an unfeudal manner those duties that, even in these days of government of the people by the people, fall to the lot of the largest landowner in a village. His wife performed similar feminine duties with a zeal that amounted to relish, and in a very feudal manner indeed.

Penelope's young niece by marriage, Sarah Lane, is somewhat uncomfortably staying with her while recovering from shell-shock after working as an ambulance drive in London, and becomes fast friends with Delia. And rounding out the cast of characters are Robin, brother of Delia and Joanna, and Hugh Falconer, an eligible if not terribly handsome friend of Robin's, who comes to stay at the cottage during his leave, relieved that there will be no young single women present who might set their sights on him. Or so he thinks.

And there are the former inhabitants of the cottage—the domineering Mrs Gethridge, now deceased, and her former companion Miss Corran, who went mad soon after and has been hospitalized nearby ever since. Not to mention Miss Corran's big cat, Dominic, who also manages to figure prominently.

Farthing Gate is such an odd little novel—part cozy little wartime village tale with a charming cast of characters, and part a strangely gothic haunted house story. Imagine Rebecca as rewritten by Richmal Crompton (but probably not quite as enticing as that might make it sound).

The two sisters and their children are entirely believable and relatable, and Carroll's psychology is sound in presenting their dynamics and those of the other characters who pay them visits. She's best at telling of the day-to-day events of wartime life (though much of the time the war remains very much in the background). And however daft it is, even the ghost story succeeds in creating some suspense and curiosity, especially as the ghost cat's malevolence seems particularly to affect young, sensitive April, though the climax of it all is a bit too pat and easy.

Where Carroll falls down a bit, for me, is in the romantic bits, which are only a step or two above Mills & Boon. The romantically involved characters are, alas, the most bland and tiresome of the bunch, which makes me once again wish that authors like Carroll had been allowed (even encouraged!) to write novels focused entirely on domestic and/or wartime life without having to always rely on trite romance to sell their books. I should also note that, though cozy enough when there's no ghost cat traumatizing the children, Farthing Gate is more of a light drama than a comedy. The children are occasionally good for a laugh, and the dialogue between the two sisters is often amusing and smart, but most of it isn't played for laughs. I found myself wishing for a sequel in which the two husbands return from the war and minor domestic confusions and misunderstandings ensue. Despite the weaknesses, however, Carroll's writing did keep me turning pages, and I have to confess that I also spontaneously purchased several more of her books right after finishing Farthing Gate.

I'm curious particularly about some of Carroll's other wartime writing, since one of the most effective and harrowing passages in this book is the description of Sarah's near-miss in London, which makes me think Carroll must have had some first-hand experience of bombs herself:

For the thing that had happened to Sarah, airily described by Aunt Penelope as "being hit in the blitz," had been a bomb exploding in the road a few yards behind her ambulance. …

It had been the culmination of a night of horror and fear; of driving with dry mouth and staring eyes through streets that had become for all who made their frenzied way along them, streets in hell. … Streets where chasms yawned suddenly before one's wheels; where a sudden frightened sideways glance gave one the incredible sight of the walls of a block of buildings caving in against a background of flaming sky, dissolving like a child's erection of bricks prodded from behind by a mischievous finger. … An inferno of noise beat on the cars; the air was thick with flying ashes, clouding one's windscreen; one's nostrils filled with the dreadful sickening smell of charred flesh …

At last—at last—one reached the hospital, as yet unhit, standing grey and steady and square like a rock in a stormy sea, and one's pathetic cargo of torn and ravaged and broken humanity was taken out, one's ambulance emptied, and back one had to go. … Back through hell, back into hell. …

And then it had happened. Above the background of noise, explosions, and screams, a scream louder than all the others, inhuman, the scream of a falling bomb. … A scream meant for her, for Sarah, coming straight for her. … Her foot had pressed down the accelerator madly, and she had raced to meet it. … Whee-ee-ee! Then nothing more. Absolutely nothing. A blank. …

Whew! That passage might well be worth the price of admission in itself.

Kay Carroll was actually the pseudonym of Katherine Alexis Charles, née MacAndrew, who knew quite a lot about life as a military wife, having married Wing Commander Guy P. Charles in 1933. She began her writing career with a memoir, Compass Course: The Log of an Air Force Officer's Wife (1941), which covered the years 1933-1941 and was described as "a vastly entertaining story by an Air Officer's wife with a quick and witty mind and a Service heart." (I'll be reading that one soon—it's sitting on my TBR shelves at this moment.) She went on to publish seven novels, now quite scarce—But Westward, Look— (1943), Farthing Gate (1945), Guest of Honour (1947), Hail and Farewell (1948), But Winter and Rough Weather (1950), Harmony Row (1950), and Anthea (1952). At least two of those (and possibly a third if it is not, in fact, lost in the mail, as I and the bookseller fear…) will be following along in my reading queue before long as well.
Posted by Furrowed Middlebrow at 1:30 PM