Here as promised are a few distractions from pandemic news and social distancing, from our bunker in San Francisco. Hope you're all safe and well too and weathering the storm as happily as possible.

It took me so long to get round to the last update of my list, and it has subsequently taken me so long to write these posts to tell you about new authors that I've actually already read books by 4 of the 23 authors I had flagged as having "TBR potential" and I've at least dipped into books by three or four more. 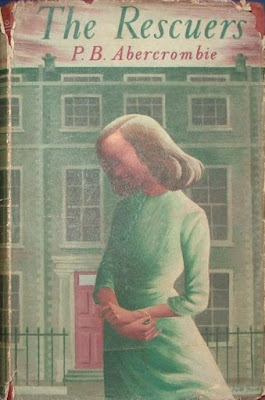 It was ages ago that I wrote about what seems to be P. B. ABERCROMBIE's most famous novel (well, it's all very relative), The Little Difference (1959), set in and around a girls' boarding school. See my review here. Much of her work is humorous, with darker underlying themes, and some of her eight novels received acclaim from the likes of John Betjeman, Marghanita Laski, and Angus Wilson, the last of whom called her "the most interesting of our young novelists." Alas, the acclaim did not result in lasting fame. 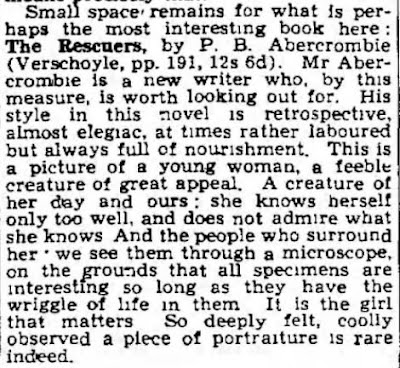 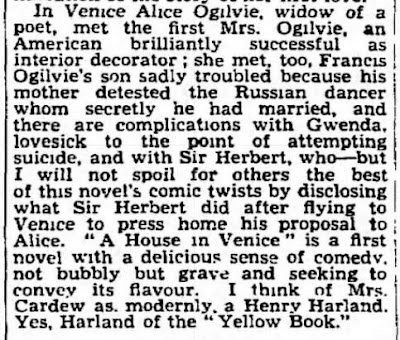 I wrote about three more new authors here back in December. I read and enjoyed (but didn't quite love) MARGARET CARDEW's A House in Venice (1941), about the widow of a poet who becomes entangled with her husband's ex-wife and son while staying in Italy. The Guardian called it "a first novel with a delicious sense of comedy." 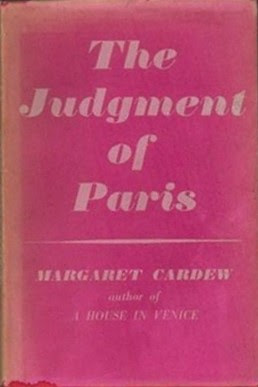 Her second novel, The Judgment of Paris (1943), is about an American inspirational speaker who has rather more difficulty uplifting the women of Paris—the Guardian called that one "a delicate morsel of literary confectionery." Cardew seems to have had a connection to France, as her subsequent works were A French Alphabet (1945) and The History of Mère Michel and her Cat (1953), the latter a retelling of an 18th century French tale. Sadly, Cardew's husband died in 1942, just as her writing career was taking off, which may help explain why no more novels were forthcoming. 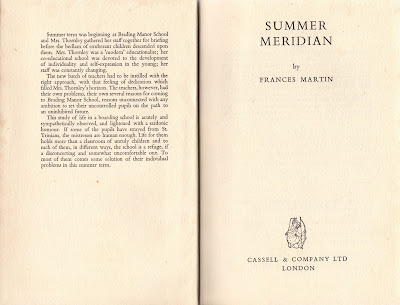 Meanwhile, I read and definitely did not enjoy FRANCES MARTIN's Summer Meridian (1956) (same post as above). It's a grownup school story set in a "co-educational school … devoted to the development of individuality and self-expression in the young," which should have been right up my alley, but alas was not. We've not yet been able to find any clues to identify Martin.

And also in that post I wrote about reading the second of two novels by MARY LE BAS. Second Thoughts (1935) is about a successful young novelist in London who falls in love and decides to stop writing, but finds it more difficult than anticipated. It's perfectly passable and has some strong points, but, as I said originally, just not very much pizzazz. But, I also mentioned that, in my first flush of excitement, I had acquired her other novel, her debut, Castle Walk (1934), which E. M. Delafield called "very fresh and amusing". Since my original post, I have actually read Castle Walk as well, and can happily report that it was much better than Second Thoughts. It follows two sisters who make a sort of wager—one will stay demurely and morally at home and try to make her way while living with their mother and stepfather, while the other will head off to London and make her way, as immorally as necessary, by hook or by crook. Unsurprisingly, all ends happily and it's a charming read. Le Bas must have used her best material for Castle Walk and run out of steam a bit with her follow-up! Le Bas, too, has eluded identification. If we assume the name is not a pseudonym, the author could be Mary Louisa Le Bas, 1914-1986, married name Turnbull, but I can't prove it.

Now, for some of the authors I haven't yet mentioned here.

While I was working on this recent update at a snail's pace, one of my "new" authors, STELLA MARTIN CURREY, miraculously reappeared in print, author of one of the latest Persephone reprints (see here), One Woman's Year (1953), which Persephone describes as "a mixture of commonplace, diary, short story, recipes—and woodcuts." Currey was the daughter of J. P. Martin, author of the Uncle series of children's books (1964-1973), and niece of Dora Fowler Martin, another author on my list. 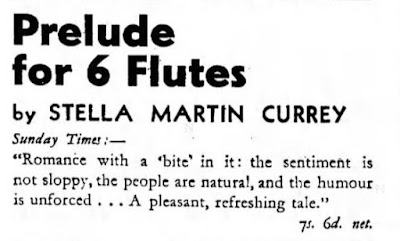 One Woman's Year was her final book, but she had earlier published fivel novels. Her debut, Paperchase End (1934), is about the newspaper business, and the Guardian admired its "deftness and humour" but felt Currey had overcrowded it with characters. Prelude for Six Flutes (1937) is about a girl assuming the care of her younger siblings after their parents are killed. It sounds right up my alley, but copies have proven elusive. The others are Marry We Must (1940), Following Charles (1944), and To the Mountain (1949).

I always like making connections with other authors on my list, and AGNES ANCROFT, author of three impossible-to-find novels, fits that criteria, being the sister of the rather better known Anne Hepple, whose romantic Scottish tales retain a small but loyal following. Ancroft's novels were As One of the Family (1938), No Divorce (1939), and Boarding House (1940). Hepple's fans will be intrigued to read that, reviewing the last of these, the Observer said it was "in the same delightful style as her famous sister's novels, and displays a flair for clever characterization." But they will likely be disheartened (as am I) at being unable to sample any of them. 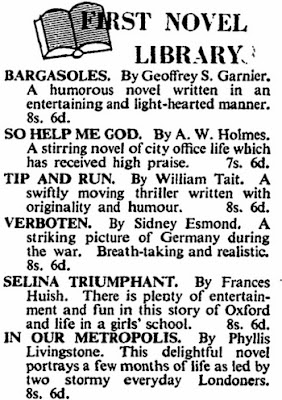 Similarly melding the intriguing and the hopeless is FRANCES HUISH. Of her one novel, Selina Triumphant (1940), a blurb from the Times said, "There is plenty of entertainment and fun in this story of Oxford and life in a girls' school." Sounds delightful, but here's another one to seek at the British Library. 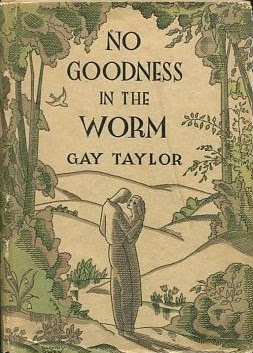 It's almost embarrassing how many intriguing authors have come to my list from the Neglected Books site. GAY TAYLOR is certainly one of those. She was the co-founder, with husband Harold Midgeley Taylor, of the Golden Cockerel Press and author or co-author of three books. The first, an autobiographical novel called No Goodness in the Worm (1930), based on Taylor's unsatisfying marriage and her tormented relationship with author A. E. Coppard, received wildly varying reviews. A few years later, she collaborated with close friend Malachi Whitaker (whose stories were fairly recently reprinted by Persephone) on the humorous satire The Autobiography of Ethel Firebrace (1937), from the point of view of a bestselling novelist of high sensibility and healthy ego. Her final book, A Prison, A Paradise (1958), published under her Loran Hurnscot pseudonym, is a diary (with names changed) revisiting her relationship with Coppard and her subsequent spiritual revelations. Elisabeth Russell Taylor wrote about her interest in Taylor, and particularly about A Prison, A Paradise, here. Neglected Books has also discussed all three of Taylor's books (see here). 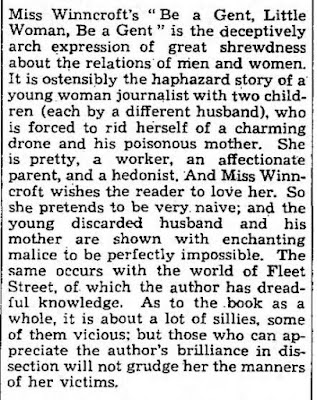 Similarly on my radar because of Neglected Books is EILEEN WINNCROFT, the author of two novels—Be a Gent, Little Woman, Be a Gent (1938) and Angels in Ealing (1939). According to the Observer, the first is "the haphazard story of a young woman journalist with two children (each by a different husband), who is forced to rid herself of a charming drone and his poisonous mother."

I had got as far as discovering that the Winncroft name was a pseudonym for one Martha Blount, but hit a wall at that point. Neglected Books, however, discovered that Blount itself was a pseudonym, and went on to identify her—not to mention actually getting his hands on the first of her novels. See here for his post about her.

FRANCESCA MARTON, however, came to my attention thanks to Mark Harris, a loyal reader of this blog. This was the pseudonym of Margaret Bellasis, who was a
historian and author of four pseudonymous novels, most set in the early or mid-Victorian periods. Over the Same Ground (1944) tells two alternating stories set a century apart in the same seaside town. In Attic and Area, or, The Maidservant's Year (1948) and Mrs. Betsey, or, Widowed and Wed (1954) she seems to have taken on the challenge of writing novels that were Victorian in both scope and style. According to the Evening Standard, the former "leaves one dreaming about the London that inspired Cruikshank and fertilised Dickens." The latter, about a 28-year-old widow struggling to support her children by working as a housekeeper, was even more enthusiastically praised: "Francesca Marton has recreated Victoria's England—the great country houses filled with color and excitement both above and below stairs; the sprawling, noisy city of London with its magnificent exhibition and its wretched poor; and Betsey's own sturdy, hard-working middle class" (Hartford Courant, 1 May 1955). Her final novel, Speculation Miss (1958), set around 1800, "loads a bevy of young spinsters on an East Indiaman for a six months' voyage with a crew of pretty hot-blooded, shiver-my-timbering sailors" (Guardian, 16 Dec 1958). She also published two historical works under her real name—Honourable Company (1952), about her own family's contributions to the East India Company, and "Rise, Canadians!" (1955), an acclaimed account of the 1837 rebellion in Upper Canada. The latter at least has been reprinted in recent years. 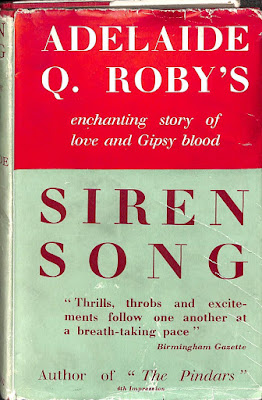 And rounding out this post is ADELAIDE Q. ROBY, author of five novels, most historical in setting and all released in e-book format by Endeavour Media in recent years. The Pindars (1939) is a family saga moving from the Industrial Revolution to World War I. Siren Song (1940) is about the romance of a farmer's daughter educated by a kindly clergyman. 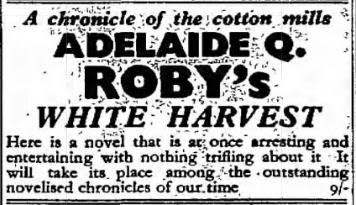 White Harvest (1941) is another saga set within the cotton industry. Roby then apparently fell silent until Sea Urchin (1974), set in an 18th century Cornish village. One additional novel, Charlotte Once Again, set in the 1960s and featuring ghostly themes, has been released by Endeavour, but I've not been able to determine its original publication date or whether it's a previously unpublished work.

All of these seem to have potential. Now if only one had unlimited reading time! And next time I have 12 more authors who have roused my curiosity.
Posted by Furrowed Middlebrow at 11:00 AM