I'm finally getting round to writing a bit about the 100+ new authors added to my main list last October. Better late than never…

Perhaps my favorite books to unearth in my research are those with World War II settings, and in this post and the next I'll mention 18 authors added to my list who wrote at least one war-related novel. Were all of my discoveries of the quality of HAZEL PYNEGAR, I would surely pack it all in and start reading medieval poetry or ancient philosophy. And she sounded so enticing too. A 1940 article said that Pynegar, "apart from her work as an actress and running her own repertory company, has travelled the world, hiked through China' and Siberia, and is considered a novelist of great promise." This was presumably based on the reception of her first and only solo novel, Stationary Journey (1940), about a group of characters trying to escape from a Chinese village as Japanese invaders approach. That one could be simply brilliant for all I know, but Pynegar then collaborated with screenwriter and novelist Noel Langley on three humorous novels (to use the term loosely). There's a Horse in My Tree (1948) is described as a "comic novel set on the coast of Cornwall," while Cuckoo in the Dell (1951) is set in the days of William the Conqueror and deals with the the disillusionment of an idealistic Norman knight at the hands of a group of Saxon women.

But naturally, the title that caught my eye was Somebody's Rocking My Dreamboat (1949), about a group of women and children being evacuated from England on a tramp steamer at the height of the war. Could anything have been more carefully calibrated to excite me? So of course, I worked hard to get hold of a copy, and for what? Now, disappointments go hand-in-hand with the kind of literary excavations I do, but this one was absolutely dire (and I'm happy to report that my Fairy Godmother also sampled it—her copy had a dustjacket, of which she sent the above scan—and her assessment was the same). It's a distasteful mish-mash of postwar cynicism and adolescent humour, and the authors seem to have absolutely loathed all the characters (as did I). It also seemed to me a distinctly masculine novel, so one gets the feeling Langley may have had more impact that Pynegar did, or else Pynegar herself was someone I wouldn't want to have known. Ugh. Awful. 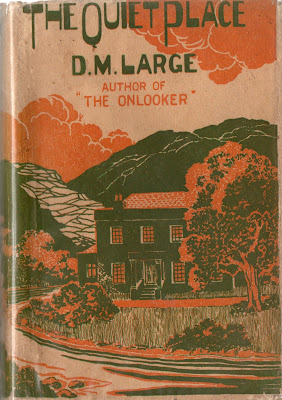 But fortunately, I have better luck much of the time. For example, I have hopes for DOROTHY M. LARGE, who wrote several novels focused on Anglo-Irish life in the country. The last of these, The Quiet Place (1941), is set in an Irish boarding house among English folk fleeing German bombs.

That one is in my hot little hands now, and I was surprised to see that my copy arrived with dustjacket as well. Stay tuned on this one.

And although I can't really claim to have discovered her (Neglected Books wrote about her here), PHYLLIS LIVINGSTONE could pay off as well. The alluring title is In Our Metropolis (1940), set at least in part in London during the Phony War and humorously following the ups and downs of young married life. But I did discover in my research for her list entry that Livingstone had also published an earlier novel, Loose Covers (1931), under the pseudonym Naomi Ludolf, which was also the name she used as a stage actress. Livingstone's early life was, we discovered, a bit complex: she appears to have been born to an unmarried mother, who then married another man when she was 4, leaving Phyllis to be raised at least in part by her grandparents. It's always tantalizing to find little tidbits like that about an author, but it's almost impossible to fill in any more details short of a relative turning up. 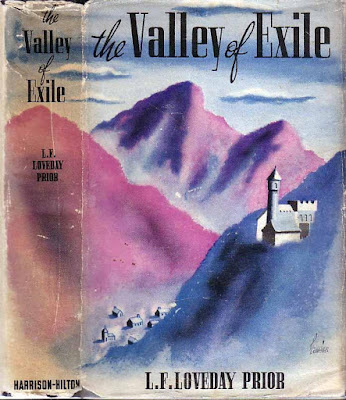 A quite different tidbit turned up about our next author, L[ILIAN]. F[AITH]. LOVEDAY PRIOR (sometimes just credited as Loveday Prior). On the invaluable 1939 England & Wales Register, searchable on Ancestry, we see Prior working as an assistant mistress of Latin and French at Raven's Croft in Sussex, the same school at which mystery author Edith C. Rivett (better known as ECR Lorac, some of whose books have been reprinted by the British Library recently) was a visiting art teacher, having (presumably) been evacuated from London. A small world. Loveday Prior published five novels, of which two, The Valley of Exile (1939) and its sequel These Times of Travail, deal with the rise of fascism in the South Tyrol region of Austria. 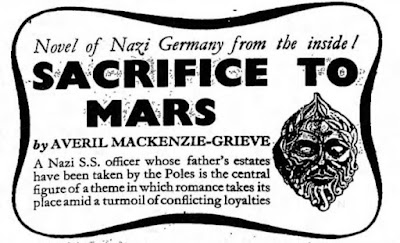 Along similar thematic lines, AVERIL MACKENZIE-GRIEVE's second novel, A Gibbet for Myself (1941), is set in Italy just before the rise of Mussolini. Her first, Sacrifice to Mars (1940), was described in advertising as a "novel of Nazi Germany from the inside!" Mackenzie-Grieve was also a historian, biographer, and travel writer whose non-fiction included The Last Years of the English Slave Trade: Liverpool, 1750-1807 (1941) and The Great Accomplishment (1953), a collection of short biographies of prominent women. 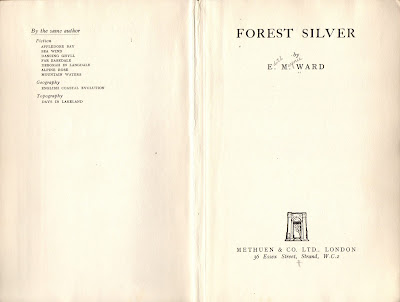 I'm not sure if Prior or Mackenzie-Grieve will prove to be my sort of authors, but one more I have high hopes for is E. M. (EDITH MARJORIE) WARD. She wrote around a dozen novels and was known for her Lake District settings.

Of those novels, Forest Silver (1941), Isle of Saints (1943), and Voices in the Wind (1944), at least, are set in wartime, and the first is now in my hands, so I'll soon know if she lives up to her potential. Unfortunately, I haven't been able to definitely trace her in records so far. It's possible that she's the Edith Marjorie Ward 1898-1968, daughter of John and Beatrix Ward, but there's no definite confirmation so far. 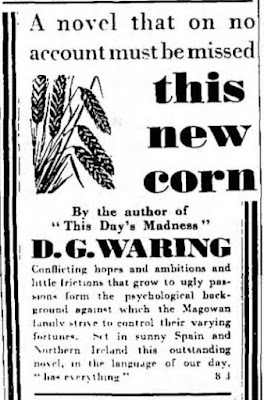 I'm not sure I'll be rushing to read the books of D. (DOROTHY) GAINSBOROUGH WARING any time soon, but some of her books do fit the theme of this post. She published ten novels, at least some of them thrillers and most featuring Irish characters or themes. Several also presented the approach of war or the war itself, but perhaps rather problematically. According to ODNB, she was a member of the British Fascists for several years, and her early novels "made clear her continued admiration for Hitler." She had earlier been a controversial figure in Northern Ireland too, where she and her father were strong Unionists. In later years, however, she became a regular on the Northern Ireland Home Service's radio quiz Up Against It. 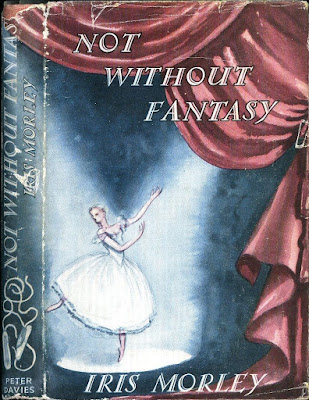 At the other end of the political spectrum is IRIS MORLEY, a journalist, historian, and author of seven novels, some historical in subject. Morley married Communist journalist Alaric Jacob and her books have distinct Marxist leanings. Nothing but Propaganda (1946) was a partially autobiographical novel about a young woman who lives in the U.S. for a time, marries unhappily, divorces, then marries, ahem, a Communist journalist. The story ends in England during World War II.

Morley spent some of the war as a correspondent in Moscow, as did her second husband, journalist and novelist Alaric Jacob, out of which experience grew Not Without Fantasy (1947), a satirical tale of journalists in wartime Moscow. According to newspaper accounts of her death, Morley was terminally ill with cancer but was not told of the severity of her condition. She fell ill during a vacation in Cornwall, intended to restore her strength, and died a few days later.

But finally, to end on a more intriguing note, ELIZABETH WHITEHEAD, not yet definitely identified, apparently wrote only a single children's adventure title, Adventurous Exile (1946), about a party of English schoolgirls and teachers trapped in France during World War II. But it does sound like fun!

Next time, nine more "new" authors and more wartime stories.
Posted by Furrowed Middlebrow at 7:58 AM