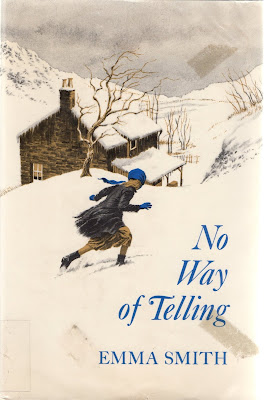 Anyone who has read this blog for very long at all will know that my TBR list is very long and I'm about as methodical in approaching it as a fruitfly. So, to have come across a fellow blogger writing about a new-to-me book in early November, and to have actually read said book over our Christmas break only a few weeks later, is astonishing timing indeed. Ordinarily, I would be saying here that so-and-so mentioned this book back in 2012 and I've just now got round to it. But this time, I can say that Kirsty at the Literary Sisters wrote about this book here on November 7th—practically yesterday in blogger time—and here I am already seconding her enthusiastic recommendation.

Some of you already know Emma Smith as the author of The Far Cry (1949), a novel reprinted by Persephone, and of Maidens' Trip (1948), about her WWII adventures on canal boats, as well as several other memoirs and works of fiction. I've read none of these, so I can't make comparisons, but I'm certainly going to rectify that soon.

No Way of Telling, which was a runner-up for the 1973 Carnegie Medal, is a wonderful winter story, which may have been part of the appeal for me, since despite a bit of a cold spell in San Francisco (i.e. lows in the mid-40s, highs in the high 50s, hardly cold at all by the standards of anyone who didn't grow up in Dubai), it never really feels wintry or, therefore, Christmas-y to me here. Winter books are a reasonably good substitute, and don't require any shoveling.

Although the book was marketed by the publisher as a children's book, it's really very much a novel for any age that happens to be about a young girl's harrowing adventures during a terrible blizzard in a remote part of Wales. It could almost be called an Old Man and the Sea from a young girl's perspective—a Young Girl and the Snow, as it were, with the sharks transposed into shady characters darkening the otherwise cozily snowbound setting.

Young Amy lives with her grandmother, Mrs Bowen, in a fairly remote part of Wales. As the novel begins, Amy has been sent home from school early due to the approaching storm. Smith does a wonderful job of setting the scene as Amy makes her way through the snow—you can sense the isolation:

There was nothing to see; nothing but a white swarming nothingness. The hill that rose up in front of her was invisible and the snow itself had altered. The flakes were smaller now and driving harder. She was uncertain of how far she had come, uncertain of exactly where she was; and as she realized this she felt a curious movement inside her, the sudden squeeze of sudden fright. It was not that she was afraid of losing herself, for the track was clear enough yet and she had only to keep on walking ahead until she reached a path turning off that would lead her down to the stream and across it on a narrow wooden bridge and up the further side to the Gwyntfa, the cottage where she lived with her grandmother, Mrs Bowen. If instead she had had to follow the track, an old drovers' road, on up the valley, up and up and still on for miles over a waste of grass and fern and boggy patches and outcroppings of rock where curlews nested in the spring, that would have been another matter. Anyone might get lost up there.

But Amy's fear was not of losing her way home. What frightened her was being unable to tell where she was on a path she knew so well. An entire hill had disappeared, and the familiar track was not familiar any more, and the snow was increasing, and there was nobody with her. Then she noticed close by her feet a large squarish boulder, its shape already altered by the snow blown against it but still recognizable as a rock on which she often paused when she was coming from school and the weather was sunny and she was not in any hurry. Her panic evaporated. After all everything was where it had always been—not gone, only concealed. She shifted the milk-can to her other hand; the weight of it dangling from its wire handle had numbed her fingers. Head bowed, glove to cheek, once again she set off.

We also get lovely details of the household and their daily lives, including the supplies Mrs Bowen has on hand, which will have to see the two through the storm, as they'll be completely cut off. One of the things that makes this, for me, such a lovely book, is that Smith allows it to start at a leisurely pace, taking time to bring the setting—the house itself and the surrounding hills and cliffs and paths—vividly to life. While impatient readers might wish things would pick up, it's this preliminary detail that pays off so richly as the pace quickens to a near-thriller, the landscape comes into dramatic play, and the reader is right there with Amy, able to picture every move, every hill, and every precipice. 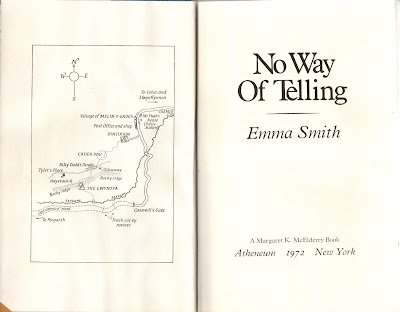 For it's not long until Amy and Mrs Bowen, sitting at night by the fireside, are disturbed by an enormous, burly, dangerous-looking man who speaks no English and has a terrible wound on his arm. This stranger bursts into the isolated home, grabbing blankets and supplies, including a raw leg of lamb a neighbor has just given them. He disappears back into the night, leaving them shaken and not knowing what to expect next. But he's soon followed by two more men, who claim to be police seeking a murderer, but who somehow make both Amy and her grandmother uneasy. They have "no way of telling" what the truth of the situation is, and likewise, even when they begin to figure it out and realize they are in danger, they have "no way of telling" their neighbors or friends because of the blizzard.

This is a book that offers vivid setting and situations, beautiful writing, two rich main characters with a completely believable and compelling relationship, and an increasingly tense, page-turning plot. It was a delicious surprise for my holiday reading, and I'm thankful to Kirsty for having unearthed it and written about it.

Posted by Furrowed Middlebrow at 7:54 AM