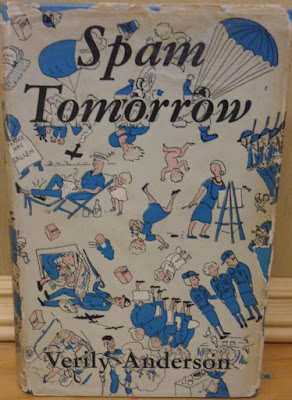 I don't about you, dear readers, but I don't do as much re-reading of old favorites as I would like. I'm always meaning to, but then I come across new books and get sidetracked by the proverbial bright shiny object instead. But I feel particularly bad about those books that I read before I started blogging, which have remained "the standard" for me but which I've never written about. Those are the books that tend to gaze accusingly at me from my bookcase.

It was therefore very much high time for me to re-read this one, one of the first WWII "home front" memoirs I ever read. It remains, along with Frances Faviell's A Chelsea Concerto, an absolute favorite. I've written about several of Verily Anderson's lovely, poignant, hilarious memoirs before (see here), but I haven't circled back around to this one. Until now!

"Long-distance call for Bruce," a F.A.N.Y. sergeant, soured by the years of peace between the wars, looked into the common-room and addressed me in the third person.

I zipped up my khaki skirt, loosened after lunch, and ran to the telephone. It might be Donald. It was.

"What size do you take in wedding rings?" his voice asked from London.

"I don't know, darling. Why? Are we going to be married?"

"That's what I should like. Can you get leave?"

"Of course, darling." I would have married Donald any time he asked me since I first met him a few years before.

"All right, darling. Of course."

After that memorable (if somewhat anticlimactic, from a marriage proposal perspective) opening, Anderson flashes back to a breezy summary of her childhood and youth, including her troublesome schooldays (later unforgettably described at full length in the wonderful Daughters of Divinity) and a disturbing but entertaining near miss with a possible white slaver. 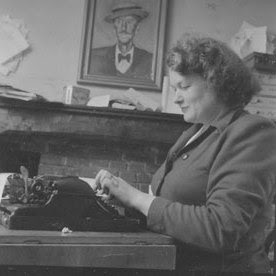 But then it's on with the main course of the book—the experiences of Verity, Donald, their friends and relatives, and their own growing family during the war years—all told with Verity's delightful zest for life and poignant stoicism in the face of hardship. From her initial appreciation of the aesthetics of barrage balloons ("If this is the war," I said, "it's much prettier than I'd expected"), to enduring a rather daft F.A.N.Y. court-martial for having crashed a makeshift ambulance into a fence post, to a bout with German measles in a hospital reminiscent of a medieval torture chamber, Verily's war gets off to a bumpy start.

Verily (I somehow feel that I'm on a first-name basis with her) is just the sort of author that you feel you’d love to sit down to tea with (though mind you, the three-ring circus of a home she describes wouldn't make it the most restful of teas). She's also the kind of author who, between provoking giggles, reveals an underlying strength and a determination to find the lighter side of even the darkest moments. One could do worse than remember her perspectives in one's own stressful moments. I love her reasoning about staying in the F.A.N.Y.s:

Walking home to the rectory, I tried to analyse my reasons for wanting to go back. My heart had never been in the F.A.N.Y.s until Dunkirk. The community life did not suit me. Discipline did not appeal. I was not a good F.A.N.Y., either technically or socially. Could it be patriotism? Knowing myself, I felt there must be some more selfish motive behind it. Then I remembered telling Lucy I should feel safer right in the war.

That was it. Anything might happen now, not only to my brothers and friends in the navy, the army, the air force, but to my parents, to Rhalou with her little family, and to Lorema still at school. In the F.A.N.Y.s I should be safe from the impact. Somebody else does your thinking for you in the army, and even your feeling. And if I were killed, well, in the F.A.N.Y.s life was that much less interesting to want to cling on to.

But only a few pages after that poignant moment, here she is opportunely and hilariously giving the newly-trained neighborhood first-aid post a chance to do their thing:

During an early daylight raid I became one of the first casualties to be treated by the first-aid post set up in the garage under Berkeley Square. I was making shepherd's pie in our small kitchen, carefully following the recipe book because I had never learnt to cook before I was married. A bomb dropped some way off. The vibration caused a heavy saucepan to bounce off a high shelf; it hit and broke a beer bottle on a lower shelf, which then fell on my head. It was the silliest accident, because anyone In their senses would have looked down and not up while that sort of thing was going on. I went on with my shepherd's pie till I realised that the excess of uncooked gravy was dropping from my head.

When I asked the local chemist for lint and disinfectant, he felt it was only fair to allow the first-aid post to claim me. He personally led me down their ramp; and immediately a label with my name and address and religion on it was tied round my arm in case I died during treatment. The V.A.D.s were as pleased to see the blood running down my face as we, in the F.A.N.Y.s, were when a new old crock fell into our hands. Half a dozen V.A.D.s made a rush at me and treated my small abrasion as though my whole head had been blown off. They treated me for shock with sugared tea, specially brewed, and they would have gladly carried me away on a stretcher had I allowed it.

Then there's the night Donald, who works for the government, doesn't arrive home and Verily convinces herself he's with some floozy, only to have to cool her jets the next morning when she learns that he'd been summoned to an unplanned meeting with Churchill…

In Anderson's later memoirs, we come to know her children very well as they grow up (including Rachel, who is a well-known novelist and children's author in her own right). In Spam Tomorrow, we get to be in at the births of Rachel and her older sister Miriam. No doubt childbirth always feels harrowing to those involved, though not many first-time mothers have to experience labor pains and a bombing raid at the same time (while being observed by a group of medical students, no less):
Whenever, from time to time, I could get my breath I gasped out some fatuous crack, feeling it behoved me, as the central figure, to entertain the company a little.

As the pace grew fiercer, outside interference was added to the drama by the crash of gunfire and drone of aircraft overhead.

"Ours" said one student with confidence, and was immediately contradicted by a bomb dropping a few fields away. By now I had ceased to care, and would have welcomed a whole bread-basket of bombs on the top of us.

Spam Tomorrow progresses through the war years and right up to V-E Day (descriptions of which are always among my favorite parts of war memoirs and novels), so that first-born Marian is old enough to have become a connoisseur of bombs:

When a bomb whistled down, Marian threw herself giggling on to Donald's bed, saying, "One two three and a—" "Bang!" she shouted with delight as the bomb exploded.

"Oh, the woos," she said regretfully of the all-clear, knowing it meant that she must return to bed.

If you haven't met the delightful Verily yet, you really owe it to yourself to make her acquaintance. Spam Tomorrow is followed by five more memoirs: Our Square (1957), about the family's harried life in London after the war, Beware of Children (1958), about their time running a holiday vacation camp for children, Daughters of Divinity (1960), about Verily's school days, The Flo Affair (1963), about Verily's adventures with the children following Donald's unexpected death, and Scrambled Egg for Christmas (1970), which takes up the family's story a few years later, when Verily is back in London trying to make ends meet. Some are easier to find than others, but all are well worth reading. It all started with Spam though!
Posted by Furrowed Middlebrow at 5:37 AM