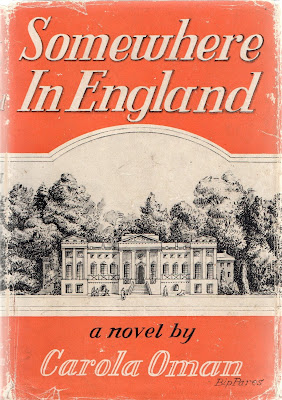 I'm going to get round to writing about some of the wonderful fallout from my recent hopeless wish list post very soon (can fallout properly be described as wonderful? well this kind is!), but I must tell you first about this recent treasure that I've neglected for a few weeks.

"At any rate," ended Philippa-Dawn, staring up at the garland of silver monsters gently swaying above them in the evening sky, "at any rate, it'll be a change of Balloons."

If you've read my Furrowed Middlebrow Dozen post from December, you already well know that my first taste of Carola Oman—the early-wartime Nothing to Report—was one of my favorite reads of 2018. After falling in love with that book, I was madly trying to find information on Carola Oman's other fiction. Apparently to no avail, since most sources confidently assert that Oman was an author of historical fiction and, later, historical non-fiction, with nary a mention of any other fiction at all.

I have nothing in particular against historical fiction, by the way, though I never seem to get round to it very often. But it's difficult to imagine Oman's delightful sense of humor being given free reign in, for example, The Best of His Family (1933), described as being about "Shakespeare and his times," or Over the Water (1935), "a novel of Scotland at the time of Prince Charlie's ill-fated rising." They might be absolutely riveting, but they can hardly be overflowing with guffaws, nor can they be packed with WWII-era detail. What I really wanted was another Nothing to Report.

I identified most of Oman's other novels and confirmed that they were, with the exception of a vanishingly rare 1930 title Fair Stood the Wind (more on that one soon, I hope), historical in subject. I even perused the titles of her non-fiction, just in case. Most, such as Britain Against Napoleon (1942), or Lord Nelson (1954), were self-explanatory. But what of Somewhere in England, published promisingly in 1943 and listed among her "other" works? I couldn't find a single detail about it, there were few copies for sale (as luck would have it, there are four available as of this writing, more than when I was searching), and no library would lend it. Spontaneously, and as much out of frustration at the lack of information as out of real hope that it would be a treasure, I spent $40 for it, just on the off chance… 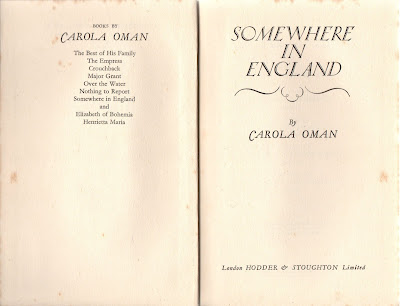 As it turns out, I might well have shelled out even more, and done so happily. When the book arrived, I was immediately enticed by its low-budget but promising wartime dustjacket. Then, a glance at the back cover with its brief synopsis. One line jumped out at me: "Those who have read Nothing to Report will find themselves among familiar faces."

My unfailing instincts (or pure dumb luck, probably, but I prefer to assume the former) had led me to a sequel!

The first section of the novel (it is indeed a novel, not an "other") focuses on a new character—young, perky Philippa-Dawn Johnson, who is preparing to launch her nursing career at Woodside, the country home now overseen as a hospital by none other than the redoubtable Mary, whom we grew to know and love in Nothing to Report. Philippa-Dawn has decided to turn over a new leaf in her new locale, and among the changes she makes is that she will eschew her full name and become the rather snappier Pippa.

On her journey, Pippa wryly notes her first sight of London's bomb damage:

The train began to run into London suburbs, and Pippa noticed that the results of bomb damage fell into four classes. There was the type that reminded one of a child of six, lacking front teeth, there was the doll's house, with the face open, the one-slice-out-or-a-cake variety and the spilt box of matches. She soon got accustomed to the sight of twisted, rusting girders and mounds of honey-coloured rubble, but she could not see properly without sitting right forward and goggling, and as nobody else in the carriage took the faintest interest in the view, she deemed it most dignified to follow their example.

Once arrived in Westbury, Pippa is invited to tea with Mrs Bates, whom we remember as nearly debilitated by rheumatism before the war but who is now practically cured "thanks to Hitler or Lord Woolton," and is proudly shown her hostess's very own bomb crater:

After the good tea which Mrs. Bates had promised, Pippa was taken out into the cold blast to her hostess's bomb crater. It was not a very interesting sight, and if Pippa had not been told that it had been created by high explosive, she would have guessed it to have been the work of a gang of amateur navvies ordered to make a wild garden against time. It was, in size and shape, very like the smaller of the two village ponds on the Green visible from Mrs. Bates's front windows, and the resemblance was increased by the fact that Mrs. Bates had taken to keeping ducks upon its waters.

Pippa also encounters numerous other familiar faces from Nothing to Report (and here, as in the earlier book, a list of main characters might be a useful compendium). Among them is the Dowager Lady Merle, who is "the living image of Elizabeth Tudor in later life". The frivolous Lady Rollo, whose laziness and lack of any sense of responsibility for the war effort was already irritating Mary by the end of the last novel, has retreated back to India, but has left behind her daughter Elizabeth and daughter-in-law, Lalage, who are also nursing at Woodside. But most exciting to Pippa is the fact that the redoubtable historical novelist (and wry self-portrait of Oman herself?), Miss Rosanna Masquerier, is also close by, doing her war work and encountering bombs with her usual flair:

She had never consciously pictured Rosanna Masquerier; all the same it had been a bit of a shock to realize that the authoress of Polish Rose, etc., was a small and rather skinny spinster lady, in horn-rimmed spectacles, with unruly black curls under her organdi uniform veil, and what is poetically described as silver strands amongst the black.

Pippa is a charming enough character through whose fresh eyes to see Westbury, but I was nevertheless pleased, in part two of the novel, to be back firmly with Mary—a bit firmer and more no-nonsense with her wartime responsibilities, but still as capable and kind-hearted as ever. I don't want to say too much about her, because it could give away some of the plot of the first novel, but it's through her eyes that we get my favorite glimpse of Miss Masquerier:

Miss Masquerier's old Florence, known before the War as "my invaluable and devoted old retainer," and more recently simply as "my old retainer"

Mary had more than a suspicion that nowadays Miss Masquerier, who could be so sarcastic on paper about the Bourbons, went in fear of her once devoted and invaluable retainer. Florence, like many of her type, had not taken at all kindly to the idea of a Second German War. Indeed, Miss Masquerier herself had recounted in serio-comic vein that, the other day, after an unusually trying experience of ordering meals for the odd hours entailed by her hospital duties, she had said, "But surely, Florence, you can't imagine that Mrs. Hungerford and I invented this War for our own enjoyment?" to which Florence in the most lofty and knowing manner, had replied, "Well, as to that, Madam, this is a free country still, and everyone is at liberty to form their own opinions."

As delightful as this novel is, I have to confess that Somewhere in England is a bit looser in structure, a bit more rough around the edges, than Nothing to Report. Sometimes the array of characters does become a tad confusing. Yet I suspect that one reason for the book's flaws is that Oman was herself by this time very much swept up in the labors and anxieties of the war and didn't have time or patience to polish her prose and clarify her characters as thoroughly as she might otherwise have done. Which somehow made me enjoy it even more. It is, in that sense, very much a "thick of it" kind of home front novel. And even with its weaknesses, Somewhere in England is still thoroughly entertaining and made me giggle and guffaw throughout.

One other little oddity to mention: Although Nothing to Report never seems to have mentioned the fact (or I was completely obvlivious to it), Somewhere in England makes quite clear that these events are taking place in Barsetshire, that mythical county of Trollope and Thirkell. I'm absolutely terrible with names, and it's been a while since I've read Thirkell anyway, so I can’t say for certain whether Oman might mention any familiar names or places from Thirkell's more famous version of Barsetshire. It's possible, but I suspect for the most part Oman has carved out for herself her own little corner of the county, including the cathedral city of Went and the village of Westbury-on-the-Green (usually just called Westbury).

Sadly, this appears to have been Oman's final novel. From this point, she wrote only non-fiction, apparently with considerable success. Included among those later works are Ayot Rectory (1965), based on the diaries of a historical resident of the village in which Oman made her home in later years, and An Oxford Childhood (1976), a memoir of her early years. These could have potential...
Posted by Furrowed Middlebrow at 7:58 PM