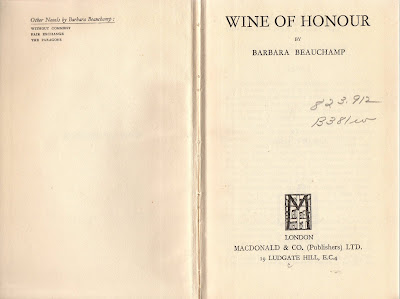 I help myself to some home-made plum cake—Laura is an excellent cook—and I wonder how many women today are back in their pre-war ruts. For how many was the war merely a temporary disarrangement and for how many others has it meant complete re-adjustment, an entirely new set of circumstances? This is a stupid thought for me to have when, even in my own case, I don't know the answer.

With the possible exception of Josephine Kamm's Peace, Perfect Peace, which I reviewed here, this fourth of Barbara Beauchamp's seven impossibly obscure novels (most of her others are going on the next iteration of my Hopeless Wish List) may be the closest you can get to time travel back to an English village (with an occasional foray into London) in the days just after the end of World War II. As such, although it may not be the most polished of novels, it will surely earn a place on this year's Furrowed Middlebrow Dozen and should probably find its way onto every historian of the postwar's bibliography.

As was the case with Kamm, it's as if Beauchamp somehow realized—unlike most authors—how unique and how fleeting were the details of life in those brief weeks and months just after the war's end, when both men and women were returning from service and readjusting, often with difficulty, to some approximation of their old lives. She seems to have realized, too, that, among all the patching up and rebuilding, the intense desire by most to put the realities of war behind them meant that many of those details would be irretrievably lost. And she decided, bless her heart, to carefully document it all, with a particular focus on women who have served—particularly in the ATS (Auxiliary Territorial Service) and the WAAF (Women's Auxiliary Air Force).

Helen Townsend, who narrates occasional sections of the novel, and neighbor Helen Watson are unlikely friends as a result of having served together in the ATS. Helen is married to Gyp, the local doctor, but has spent much of the war in an affair with Brian, and both men are now due back from active service. ("As a married woman I re-allocated myself two months ago when I knew Gyp was on his way home. Otherwise I think I should have stayed on.") Laura, meanwhile, stuck caring for her domineering father since her mother died in 1943, is already missing the war.

Then there's Mary Cross, the widowed mother of an RAF pilot, who has determined to be both father and mother to her son while supporting him by writing the "Aunt Jennifer" advice column for a major magazine:

Even as 'Aunt Jennifer,' who now dealt almost exclusively with demobilization and re-settlement queries, she was sometimes startled at the problems confronting her readers. In some she detected a dangerous apathy to existing conditions and in others a too fanatic desire to go on fighting—anything and everything, without seeming reason or purpose.

There's Angela Worthing, a well-to-do woman determined nevertheless to have a career, who tries to help out Brian's troubled brother Peter. There's John and Maggie Cobb, the owners of the local pub the Cock and Pheasant, wherein a fair amount of the novel's action takes place; the Cobbs' son Dick, who thrived in the service and was made an officer, but now gets harassed by police when he wears his medals because they assume they're fake; and their daughter Lily, who was a corporal in the WAAF and is now an unmarried mother, since her fiancé was killed on his final mission.

Other characters come in for attention too, each well-defined and convincing, and the plot is comprised basically of their efforts to adjust to the dramatic changes in their lives and the society around them. But what made the novel deliriously readable for me was the sense of being a fly on the wall witnessing vividly authentic scenes of ordinary life, with details I've never encountered anywhere else. So many wonderful scenes I'll have difficulty restraining myself, and they need little explanation, since their point (for Beauchamp, it seems, as well as for me) is documentary. There's Laura on the train:

Seated between a man in a neat blue suit and a harassed-looking mother with a baby and a small girl sprawling about her, Laura began to assimilate the other occupants of the carriage from behind the barrier of selfconsciousness which always encompassed her in the presence of strangers. In the corner opposite was a W.A.A.F. in an incredibly faded and spotted uniform, her bleached hair carefully bunched above her forehead and straggling into untidy curls round her clean starched collar. She looked a baby behind a façade of lipstick and mascara and was identical with thousands of other girls of her generation, a monstrous regiment of maidens who had marched through six years of war: good girls, bad girls, clever girls and stupid girls, who remembered little before the reign of Bevin.

Laura sighed. She would have liked to have been the W.A.A.F. and to have begun the peace in her early twenties.

And there's Angela with a unique perspective on the lifting of the blackout:

She felt better as the taxi passed through Portland Place. The B.B.C. had discarded its blast walls. Funny how one had never really noticed that it had been camouflaged. So much of London had gone unintentionally grey during the war.

Once at the club, her exhilaration returned. She had a tiny room at the top of the building and she began to unpack her belongings with a sense of excitement. It reminded her suddenly of the feeling she had experienced when the black-out was finally lifted. A daredevil feeling because you could leave your windows uncurtained for all the world to look in. You were safe from V. weapons and at the same time protected because other people could keep an eye on you.

Narrated by Helen, there's this startling tale about mussels:

I am glad we have mussel soup because it is one of his favourites. I got the mussels in a jam jar from Mary Cross who was up in London today. She says that the woman in her market who sells them is quite the rudest woman she knows, but the mussels are first class. Mary says the woman has every right to be rude because of the queues, and her son being killed at El Alamein, and being blitzed out three times, and having a murder committed on her doorstep on V.J. night. The police even searched her cellar for the weapon. Mary says the mussels are a miracle.

But my favorite is this glorious little walking tour—also from Angela's point of view—of postwar Bloomsbury, which is particularly of interest to those who have visited Persephone's shop, since Angela must surely have gotten a mysterious shiver of anticipatory pleasure passing by what would someday be a lovely grey shopfront:

She walked round by Lansdowne Place where, since May 1941, they'd been patching up the blitzed corner. She noticed, with methodical satisfaction, that yet another gleaming yellow brick building was nearing completion. You could date the devastation and the rate of repair from the lighter brick walls down to the grey black of the house on the Guilford Street corner.

Yes, spring was certainly here. The ladies of Guilford Street had discarded their utility furs for brighter and shorter jackets. Pale sunshine gleamed on the darkening partings of bleached heads. They are feeling the draught, poor dears, Angela thought, and noted the complete absence of American uniforms from the street scene. That was the big transformation—apart from spring and scaffolding—there were no Americans.

Poor Americans. Angela almost regretted their departure. They'd been good time fellows and the good time girls in London had taken them up in a big way, gum and all. Individually, Angela had liked them. In herds, they'd been a little overpowering. They'd had too much money and they looked so dreadful in those uniforms—all bottom somehow. She remembered someone in a pub who'd once told her that the trouble with American men was that their own women treated them like dirt, which was why they ended by behaving like dirt. It made you think. She thought about Peter.

The blitz scars of Guilford Street were healed with fresh green weeds. In a few months' time they would be carpeted with the yellow of dandelions and speared with the tall bright pinkness of fireweed. She turned into Lamb's Conduit Street to do her shopping. The tradesmen's sons were beginning to filter back from the services. They were easier to buy from than their fathers and mothers, less fractious and exhausted by five years of rationing and form-filling.

It's amazing, with so many authors writing about the war, and surely a whole slew of novels and memoirs published just after the war, that so few writers thought to so carefully document this exact moment in time. I get a little ghostly frisson reading some of these passages (and there are more I could share if I thought it wasn't just ridiculously overdoing things), as if I'm really witnessing these past streets, buildings, thoughts, and tradesmen's sons first hand.

If any of Beauchamp's other six novels are as enticing as this one, then she is a treasure indeed. But even if the others pale by comparison, I'm thankful to her for this incomparable snapshot of a place and time.

By the way, Beauchamp was apparently for many years the partner of a more successful author from my list—Norah C. James, who is probably still best known for her scandalous bestseller Sleeveless Errand (1929), which happens to have been described in a New Republic blurb as "a story of post-war London"—the war in that case, of course, being World War I. Although James continued publishing into the 1970s, Beauchamp's last book, The Girl in the Fog, appeared in 1958. The two also wrote a cookbook together, 1949's Greenfingers and the Gourmet. Sadly, any other details of Beauchamp's life are so far lacking, so if anyone suddenly realizes she was your great great aunt, do please get in touch.

Meanwhile, if I can't get my grubby little hands on more of Beauchamp's work, perhaps it's finally time to sample James's?
Posted by Furrowed Middlebrow at 6:26 AM