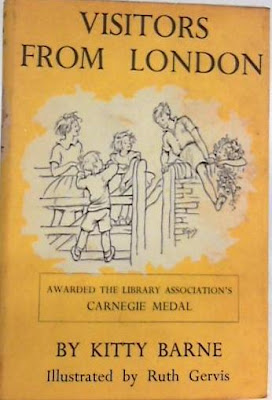 It's hard to believe that it's been three years since I first wrote about Kitty Barne. I reviewed her 1947 family tale Musical Honours here, and I enjoyed it, but was just a wee bit lukewarm in my review. I always meant to get back to her (and readers particularly recommended She Shall Have Music, which is still on my TBR list, and then there's the sequel, While the Music Lasted, which has been reprinted by Greyladies and sounds absolutely irresistible), but who knows when I would have done it if a recent public library "steps sale" hadn't produced, mixed in with all sorts of mangy old textbooks, boring contemporary romance, and beat-up old (but not old enough) Penguins, a perfectly serviceable copy of Family Footlights, another Barne book I recall someone recommended to me. For $1? How could I possibly resist?

One of the things that I was lukewarm on in Musical Honours is that there wasn't a lot of depth in the characters, nor any real meat to the plot. The same could certainly be said about Family Footlights, but it's otherwise so lively and entertaining and fun that here I didn't mind it at all. (Perhaps I'm just fickle and this time I was in the mood for something rather frivolous?) 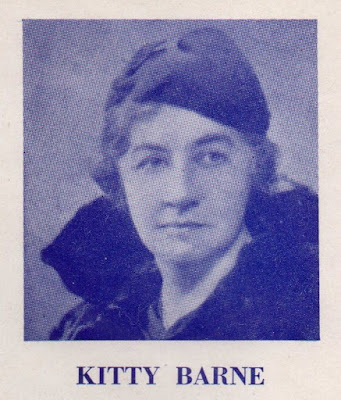 And I have to say that, even among children's stories not grounded in reality, the opening of this one is remarkable. The four Farrar children arrive in a town called Poleham, where their Aunt Myra (whom, inexplicably, the children have never met before) has taken a house for the Christmas holidays. The children's parents are disposed of in the very first paragraph—their mother is "abroad" (where their father presumably lives? or perhaps he's an astronaut on a interplanetary expedition? oh, well, who cares?) and has come down with measles, so they arrive to stay with the lively, cheerful, practical, young Aunt Myra.

Although this might be just a bit implausible, I rather admire the way Barne makes no bones about it. She might as well just say, in a very practical way, "We all know that children adapting to new situations with fun hitherto-unknown relatives is the ideal setup for adventures, so let's cut the crap and not waste time with boring questions."

But that's not the end of the pleasing implausibilities! 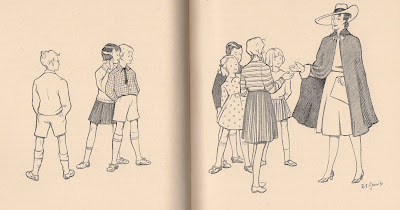 Oh, there's the usual array of charming characters: the cheerful Mrs Epping, who comes in to keep house; Ruby, Mrs Epping's joyless drudge of a daughter; Axel, Mrs Epping's 9-year-old nephew, whose parents are dead and who is miserable because the valuable fiddles left him by his father have been seized by Customs (mind you, he doesn't seem particularly upset by his parents' deaths, only by the lack of his fiddles, a pleasantly soluble problem). And then there's Aunt Myra's dear friend Roland (Roly) Martindale, a successful author and playwright, who just happens to have written a play for children already, but the children who were supposed to have performed it have been conveniently dispatched. I can't remember how precisely—outbreak of ebola, perhaps—but anyway, some irresistible factor that makes the play available for the Farrars.

The rest is predictable enough, but it's rollicking good fun nonetheless, a funny, frivolous bit of frolic and nothing much more. My favorite character is 10-year-old Jimmy, whose logical approach to managing people and making things go smoothly makes him almost a rival for Flora Poste. Most notably, perhaps, he helps the whole cast over a bumpy first encounter with the fretful Miss Pirrie, from whom Aunt Myra has sublet the house. Miss Pirrie doesn't at all like the idea of children in her house with all her fragile and stuffy chachkas, but Jimmy takes her aside and talks to her about clocks, their shared passion. With the knowledge that Jimmy has determined to synchronize all of Miss Pirrie's diverse collection of 18 clocks, she gives up the fight and resigns herself to rowdy children in her house.

I enjoyed Footlights so much that I poked around a bit and discovered that Barne's next book, Visitors from London, was a sequel, taking the Farrars into the beginning of World War II. More importantly, I discovered that I could actually get Visitors from a nearby library, so it wasn't long before I continued with the Farrars' unrealistic exploits. 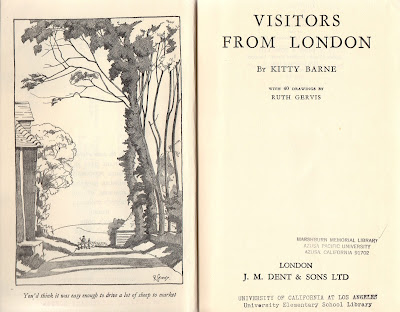 And how are their parents explained away this time? Not at all, in fact. Here's the sum total of explanation for why the children are back with Aunt Myra, who this time is staying at a farm for the summer holidays:

Gerda, the eldest of them, felt a warm glow that ran through her from her heels to her head—the holiday feeling and the family feeling combined. When they met like this, the four of them, back from their different boarding schools, term with all its thrills and joys and rages was wiped out. For nearly a couple of months school simply did not count.

And apparently parents or a stable home don't count either, as the Farrars neither reference nor appear to miss either.

There is just a bit more grounding in reality in Visitors than there was in Footlights, necessitated by the fact that the war is just beginning and Aunt Myra must accept evacuees in the forms of several mothers and their children. One of the best things here is that there is a genuine array of types among the evacuees, both the mothers and the children. There's helpful Mrs Jacobsen, who's an excellent cook, neurotic Mrs Thompson, so terrified of bombs she keeps herself and her children prisoner in their bedroom, and pessimistic Mrs Fell. Among their children, there's Fred, who despite hailing from London feels an immediate passion for sheep and for becoming a shepherd; his brother Steve, a little villain if there ever was one; there's fierce, strong Lily, who though only a teenager, is acting as mother to her two young siblings; and there's Fred and Steve's older sister Queenie, who makes herself up and wears heels to the beach, complaining all the while.

And once again, it is Jimmy who comes to the rescue in helping poor Mrs Thompson and her children, though I won't give it away. 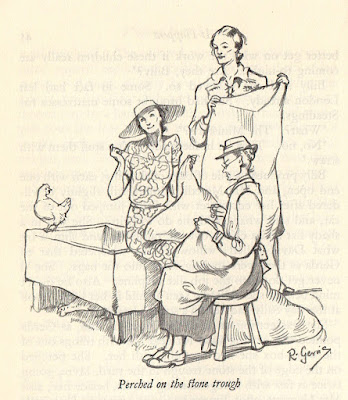 It's quite entertaining and good fun, if not quite as good overall, for me, as Footlights. For one thing, there a lot of focus on Fred's love of sheep. Now, I have nothing at all against sheep (though Andy feels differently—just ask him about our trip to Avebury and see how quickly he starts bemoaning the combo of ancient stones and sheep poop!), but these parts did drag just a bit for me. On the other hand, one tidbit did prove interesting—the fact that many sheep, should they fall and end up on their back, will be unable to right themselves. I have to admit I doubted this, but a quick Google search put me right—see here for an example and video. It does not apply to all sheep however; they're more likely to get stuck if they have thick fleece that is damp and therefore heavy, or if they're pregnant or fat. (This reminds me of my own curiosity years ago about how penguins can get up when they fall, and a diabolical plan I hatched to sneak into a zoo one night and push a few down—gently, of course. As it turns out, unlike sheep, penguins right themselves with no difficulty at all using flippers and/or beak to fling themselves back to vertical, so I was clearly concerned about the wrong species!)

I was also taken aback by the description the local billeting officer gives of the evacuation process, which is a bit more fast and loose than it seems in other sources:

'What aged children?' inquired Myra, very businesslike. You could see, thought Gerda, that though she had shied at the job like a horse at a steam-roller, she was now getting down to it well. 'What age and what sex?'

But that, it seemed, was more than Miss Williams or any one else could tell  her. The idea was that the children came to the London Stations, and if a train was there, drawn up at a platform, they got in and it went. Any children, any platform, any train, to any place.

Surely such a system could never have been in place, except perhaps in certain chaotic spots on rare occasions? How would any of these children ever have found their ways back home if no one was aware of where they were going in the first place?! 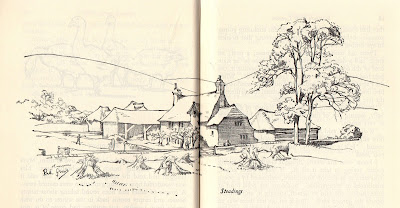 I should mention that both of these books are illustrated by Ruth Gervis, who happens to have been Noel Streatfeild's oldest sister and the illustrator of Ballet Shoes as well as other books, including several by Enid Blyton. Barne was herself a cousin by marriage of Noel Streatfeild, who encouraged Barne to start writing for children, so they were keeping it all in the family.

At any rate, these books are great fun overall for anyone who enjoys family stories. They're not on a par with Gwendoline Courtney, in my opinion, but they have their own place on my shelves.
Posted by Furrowed Middlebrow at 11:19 AM