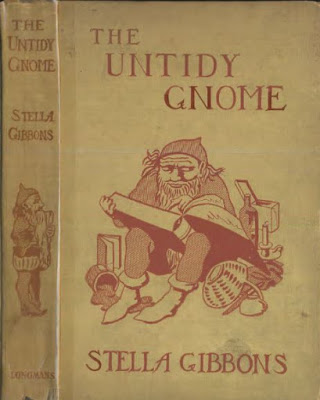 As many of you know, I've been semi-methodically working my way through a bunch of Stella Gibbons's fiction in the past six months or so, and I'm delighted to have finally got round to her one and only effort in the direction of children's fiction. I owe a big thanks (not for the first time) to Grant Hurlock for lending me his copy of the book, of which it is none too easy to track down a copy these days!

I wasn't sure what to expect from this book. In some ways, Stella Gibbons, several of whose novels for adults are loose retellings of fairy tales, would seem a natural children's author. On the other hand, despite her proclivity for fairy tales, I somehow tend to think of Gibbons as a very smart, practical, down-to-earth author, firmly grounded in reality and not terribly touchy-feely or sympathetic to fanciful reveries. So then, what on earth would her tale of elves and fairies, written for her own young daughter, turn out to be?

What it turned out to be, as I really should have known it would, was an entirely unique, funny, and "Gibbonsesque" take on a children's fantasy. If it's not a perfectly polished tale, and if it's not that surprising that Gibbons didn't feel that children's fiction was her forte, it's nevertheless the kind of book I would have delighted in at age 10 or so, and the kind that I take perhaps a deeper delight in as an adult of several times that age.

For whatever reason, Gibbons sets her story in Norway circa the mid-1700s, but the only things affected by this setting is that the character names and landscape are somewhat Scandinavian and the time is a rustic one, pre-automobile and pre-electricity. Young Gerda, the daughter of Peter the woodcutter, is kidnapped by Elves and held hostage, only to be returned if Peter vows to stop cutting down the trees which form the elves' homes. This abduction is complicated by the involvement of the Faeries, whose young Princess Fand is outraged by the kidnapping and determines to use the Faery army to rescue Gerda. 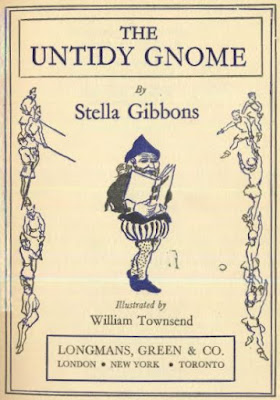 Whether Gibbons intended it or not, the plot is a strikingly modern one, even including some of the complexities of conservation of natural resources versus people's livelihoods, and even the misunderstanding of motives of those involved. Peter's large family is oblivious of the pain his profession causes for the Elves:

On the way they passed three big trees, cut down by their father and his friends, lying with boughs stripped off and trunks white as flour where the bark had been peeled from them, and if they could have seen with fairy eyes, they would have seen the homeless Elves wandering sadly among the scattered branches of their homes. Some of them were weeping and trying to build themselves little houses out of pine needles, and others were stamping and wringing their hands, and others were sitting quite still, in cold Elfin fury.

After Gerda is kidnapped, Peter faces the economic realities of his dilemma ("I shall have to promise, and we shall all starve."), but we also see Princess Fand's misunderstanding of the Elves' motives as she wants to teach them a lesson about their spitefulness ("Fand did not know that the Elves had acted, not out of spite, but to prevent more of their people being made homeless"). Indeed, here's a situation that evokes a good many of the fiercest conflicts of 20th (and 21st) century world politics, though some of those it fits best actually postdate Gibbons' story. 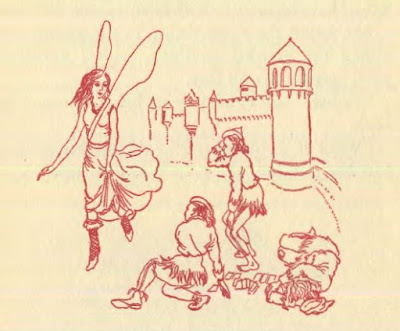 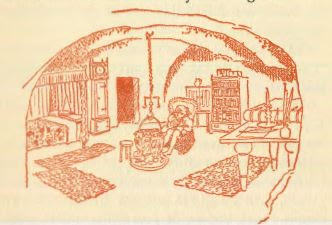 But of course these are things that an adult reader might notice. A younger reader would be far more interested in strange and often humorous details of the book's imagined universe. For example, the gnome of the title is Kob, who grew up with an overachieving houseproud mother (who may indeed have taken things to extreme, as Kob and his siblings mostly had to live in tents in the garden to avoid dirtying their home) and always dreamed of some day being a slob.  He is charged with holding Gerda in his cave high up in the mountains, but it's a pleasant enough form of imprisonment for Gerda, who passes the time tidying his cave, paying off his bills, replacing his shiftless robin housekeeper with a diligent rabbit, and generally delighting in her own Flora Poste-ness.

We learn about the strange behavior of witches' houses:

A splashing icy stream ran through the valley, and the witch's house always stood on the side opposite to which you were, so that to reach it you must ride or climb over three flat stones which made a bridge across the stream.

The witch's house only did this because all witch's houses do it, in order to puzzle and annoy travellers. In just the same way the witch never looked like a witch when you got quite close to her, though you could see her as plain as plain from a distance. All witches do this; it is a sure way of telling one when you meet one.

We learn what happens to Elves and Fairies instead of death ("'You might have been turned into mist,' said the Prince gravely"). And, my favorite, we learn about the excesses of insects as we catch a glimpse of "a butterfly who had drunk too much sunlight and was singing loudly to himself." 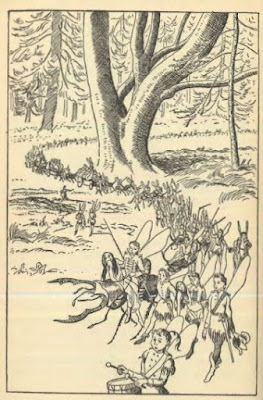 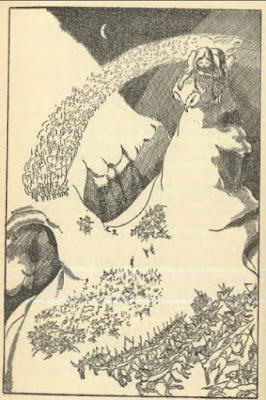 I also, despite his profession (and his lack of restraint in producing children!), found Peter hard to resist in this early scene:

Peter the Woodcutter was pouring out soup into the ten little wooden bowls which stood round him, like a little wooden fence at the head of the table, and talking at the same time to Nils the baby, for Peter wanted Nils to learn to talk, thinking it must be dull for him to hear a conversation going on all round him, and not be able to join in.

Perhaps it's inevitable, with such an imaginative setting and plot, that the ending was not, for me, entirely satisfying. (Particularly when Gibbons had made her fantasy political situation so realistic that a fully satisfying solution might have been as difficult to find as a real-life outcome to the world's problems.) But that's a small quibble compared to how enjoyable the book as a whole was. With Gibbons's name recognition and the enjoyability of the story for adults as well as children, it's hard to see why New York Review Books hasn't already grabbed this one for it's children's series.

Without giving too much away, one element of the story's climactic moments is the pivotal arrival of the rarely-seen "Snow People", who, with their particular loathing of noise and fuss, reminded me of a line from Gibbons's own ODNB entry that I used in her blurb on my British Women Writers list, describing the weekly "at homes" she hosted for many years: "She was known to expel guests from these tea parties if they were shrill, dramatic, or wrote tragic novels."

Oh, to go back in time and have an invite to one of those tea parties! 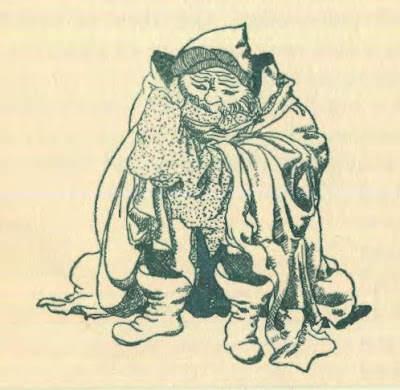 Posted by Furrowed Middlebrow at 3:40 PM