And now for something completely different from Miss Read...

Back in February, the Neglected Books site featured a review of P. B. Abercrombie's sixth novel, Fido Couchant (1962), an author neither the reviewer nor myself had ever heard of before, though she apparently received considerable acclaim in her day for the eight novels she published between 1952 and 1972, including from the likes of John Betjeman, Marghanita Laski, and Angus Wilson, the last of whom called her "the most interesting of our young novelists."

Abercrombie was, it turns out, born in 1917, and lived until 2003, though her work appears to have been forgotten long before that. Her pen name, interestingly, reverses her maiden and married names. She was born Abercrombie and in 1938 married Denis Barnes, a civil servant who was knighted in 1967. She's not yet even on my British authors list, though of course she will be added in my next update.

I'm grateful to two different readers of this blog—Mark Harris and Jeb Nichols—who emailed me to mention the Neglected Books post. I immediately checked Worldcat and was delighted to find that most of Abercrombie's novels are available to me one way or another. I more or less randomly selected one of them to request first, and apparently made a good choice, since not only does The Little Difference seem to have been her most successful work, but it also belongs on my Grownup School Story List, which makes it an excellent place for me to have started. I didn't do any digging for information about Abercrombie until after I'd read the book, but Abercrombie's Wikipedia page quotes a review of Difference from The Tatler which called it, "As enjoyable as a glass of champagne in the middle of a sunny morning when you ought to be working." I don't typically drink champagne at mid-morning, but in this case an exception is called for…

The novel follows the experiences of Vivian Mudge, an independent-minded, sexually liberated Londoner, during the year after she—perhaps misguidedly—accepts a teaching position in a girls' boarding school in Cheshire. But don't get the idea that the novel therefore belongs next to Mabel Esther Allan's Here We Go Round or Miss Read's Fresh from the Country. This is an entirely different cup of tea—edgy, jaded, and very, very funny—contrasting the glamorous Vivian with the more provincial women around her, including the two headmistresses and an array of eccentric mistresses, not to mention the goodlooking farmer nearby whom she commandeers to help her teach cricket to the girls (among other things). 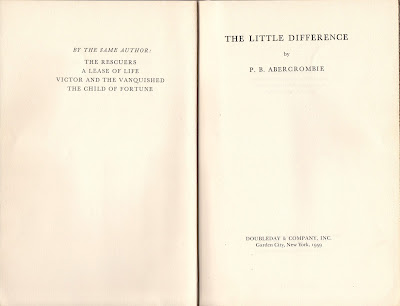 You know you're in for an unusual reading experience with the very first paragraph, in which the school's cranky music teacher trails Vivian, whom he has not yet met, on her first arrival at the school, grumbling misogynistically all along the road:

An angry old man had followed an unknown young woman for more than two miles before he began to be specific in his strictures on her character. Then, when she abruptly turned off the main road, with a gesture whose arrogance was clearly characteristic, he began to analyse in detail a person he had until then simply accused of being female. When first he caught sight of the bare brown elbow resting on the opened window, his thoughts might have been simplified into the exclamation, "Women!" which exacerbated the emotions he always felt at certain mannerisms of driving. When the arm moved and raised itself to lightly clasp the roof—like a woman holding a hat on in a wind—his rage at this most irritating of motoring affectations was mingled with a dark suspicion; "Lesbian!" he muttered aloud. The gold bracelet she wore slid down from wrist to forearm. He watched it move again when, a little later, she slowed down; he could not accuse her of not making signals, but in some mysterious way she had as she did so the air of somebody giving orders. Besides, the flashes of that ostentatious bracelet constituted, he believed, a danger on the road.

It's an appropriate opening, because in many ways Abercrombie's novel is about just how much hostility and resistance there is against women who are independent and unvulnerable, who take life, men, love, and sex lightly. To some extent, Vivian is more the sort of heroine one would expect from a novel of the late 1960s, and one can easily see why the other mistresses would be seduced by her into risking soirées with sherry, steak, and pop music (all forbidden by the sober, vegetarian, conservative headmistresses, who fortunately sleep in a different building from the teachers). Even the teachers who disapprove of her or feel threatened by her seem unable to resist her. But happily, Vivian is lacking in the angst of, say, a Doris Lessing heroine.

Vivian has for some time been the mistress of an oft-married publisher named Garnett Hatfull, whom she convinces to publish the first novel of one of her fellow teachers, Laura Lafleur. She also offers Laura advice on dressing and behaving in a more sophisticated way—though it's an uphill battle. Laura's terribly earnest feelings about romance, both in her novel and in real life, are hopelessly idealized, and Garnett agrees to publish her novel because of it naïve, unintentional comedy. When Laura turns her romantic urges on Garnett, the discord between fantasy and reality is hilariously clear:

They were very close together. In her novel, Rosita, the young and innocent heroine, had imagined that the hero's heavy breathing was because he had run all the way across the piazza. Laura had herself never heard a man breathing heavily for any other reason, but she believed she would recognise the phenomenon when it occurred. Garnett, however, could not be heard breathing at all.

The novel is a bit bare bones in its presentation of the characters. We know very little of Vivian's background, let alone the other characters. In that sense, it reads a bit like a play, set always in the immediate present. It's also perhaps a bit jaded for some readers, though if you're a fan of Barbara Pym, Abercrombie's cynical humor might be right up your alley. Like Pym, her metaphors are frequently brilliant, but Abercrombie's are sometimes distinctly more odd. Consider, for example, this early description of stern Miss Geraldine, one of the headmistresses:

She carried with her a menacing serenity. Though almost as tall as her sister she was less solidly oblong. Her face had the colour and texture of skin, but of skin that has been removed from the body and scraped on the inside; not luminous but yet not quite opaque, not dry and yet appearing never to have needed moisture. She stood with the fingers of one hand loosely entangled in a long necklet of beads, while the muted hubbub of greeting died away.

There are also some very funny passages describing the school. Ironically, though Miss Geraldine and, to a lesser extent, her sister Miss Amanda, have rigid and conservative views of the behavior of their women staff, they have founded their school on the standard of total freedom for its girls:

From sounds that she could hear—a shrieking and a squeaking—she knew that a certain Betty was swinging on the Lodge gates, smoking a cigarette. The "Suggestions for Conduct" which were put to the girls, included the thought that it would be "disturbing to the staff" if the children invaded the Lodge and its garden; and a particularly gruesome description of lung cancer was read out several times a term. Ignoring suggestions was as near to breaking rules as Betty could get (her frantic indiscipline had almost inclined the Miss Gallions to frame some rules especially for her to break, but this would entail a sacrifice of the community to the individual and was finally abandoned).

(By the way, I'm always happy when a book introduces a totally new vocabulary word to me, as happens here when Vivian, frankly fantasizing about men playing cricket, gives "a musical but frankly esurient groan.")

I found The Little Difference to be a more or less engrossing read, if for no other reason than I was constantly curious what the author was going to do next. There are few enough novels that consistently lead one down unexpected paths. That said, it does rather seem to just aimlessly amble along without any definite shape or purpose, and the ending, though appropriate to the tone and the characters, felt a bit anticlimactic.

Nevertheless, I am certainly keeping an open mind about Abercrombie, because if nothing else she's a deeply interesting and unusual author, which counts for a lot with me. I've already made an interlibrary loan request for another of her novels, so stay tuned for more…
Posted by Furrowed Middlebrow at 5:57 AM