When one delves into as many forgotten novels as I do, panning for gold, one inevitably accumulates some detritus in one's pan. I've got two of these "misses" for you here—both apparently overflowing with potential but sadly not living up to it for me. 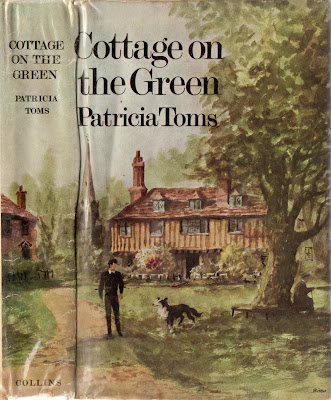 Cottage on the Green (1967) is the third in a loose series of novels set in the idyllic village of Pennycress, perhaps marketed with an eye toward Miss Read's Fairacre novels. They seem to each focus on different characters, but characters from earlier novels do make appearances here and there. Toms actually started writing not long after 1960, so she doesn't even get an entry on my main list, but the books sounded so charming I couldn't resist checking her out anyway.

In Cottage, Jacqueline Kerr, a young widowed mother of two who works as a translator (of unspecified manuscripts), returns to Pennycress, her daredevil husband having died 18 months earlier in a climbing accident. There she is comforted by her charming mother Mrs. Dennison, and has her problems added to by her rather obnoxious egomaniac of a father, who is of course humored and doted upon by his poor wife and who is obsessed with his descent from local hero Richard Henley, an 18th century naturalist, whose home the cottage once was. A prominent subplot of the novel is Mrs. Dennison's donation of a highly valued cup believed to have belonged to Henley to a church sale, Mr. Dennison's temper tantrums about said donation, and the efforts to retrieve the cup, which makes the rounds of the village in the course of the novel (perhaps having a livelier time of it than the reader). 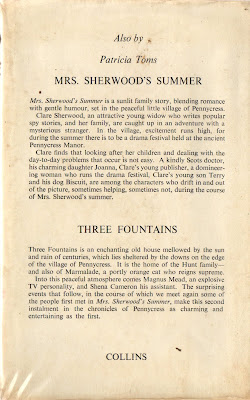 There's also a drab, melodramatic subplot involving Celia Turner, a teacher at the village school, who is loved by her students but who harbors a bitter passion for the local potter, Patrick Miles, who is indifferent to her (and to most other people, until Jacqueline appears) and who apparently has a secret hidden in his past which makes him a bit bitter as well. Plenty of bitterness to go around.

There are some charming moments, as in Celia's fellow teacher Miss Anstey's efforts to harness the children's creativity in painting a mural of the Battle of Hastings, and restrain them from including a number of severed heads, which they feel sure should figure prominently. And there's a meeting of the Rural District Council in which local tensions come to the fore in humorous ways. Sadly, though, there is mostly hand-wringing: about Mr. Dennison's criticisms of Jacqueline's parenting skills, about his ridiculous cup, about Celia stalking and harassing Patrick, about Patrick being a jerk to everyone, and, eventually, about the obvious but not-very-interesting romance developing between Jacqueline and Patrick. Ultimately, the novel just reinforces my belief that, to paraphrase Virginia Woolf, on or about 1960 middlebrow fiction changed irrevocably to something far more angsty and melodramatic, and far less interesting to me. There are exceptions of course, but sadly, this one isn't among them. 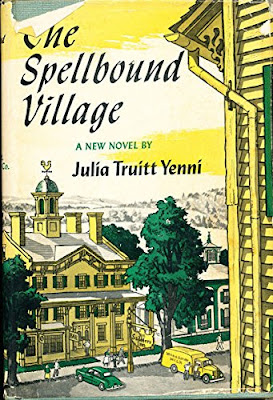 I feel a little bit bad about my second "miss". The Spellbound Village (1951) was actually a surprise New Year's gift from the wonderful Kathy Reed (along with a vanishingly rare Ruby Ferguson title that will no doubt turn up here some time soon), who knew I'd be interested in its intriguing American twist on D. E. Stevenson's Miss Buncle's Book. So it's rather churlish including it in this post, but I would of course be nothing without my hard-as-nails, just-the-facts-ma'am critical integrity, and I think Kathy will understand that I can be enormously grateful to her for sharing the book with me and at the same time gleefully point out its failings. And of course, other readers' experiences of the book might differ, so I am selflessly pointing it out to you just in case. (It also helps that I have another post coming up about another book Kathy kindly sent me a while back, which I absolutely loved.)

Julia Truitt Yenni was apparently from Alabama and published four novels in all, of which this one was the last, following a nine year gap after her previous work. Thus, it's a final novel about a first-time novelist, 27-year-old Faith Goodbind, who, having had a happy but meandering type of childhood with her late father, moves to the small New England town of Two River Junction, hoping to build a stable home for herself at last. Unbeknownst to the locals, she has already written a novel, Summer Brave, and sent it off to the publishers Redfield and Carson in New York.

Naturally, the publisher recognizes a masterpiece when he sees it, and the book appears in due course, only to provoke considerable consternation in Two River Junction at the suspicion that its characters are based on local residents. Tawdry affairs, financial secrets, and other intrigue have been, they believe, callously revealed, the local brothelkeeper is enraged that her brothel has been presented in the novel as a … er, brothel (how dare she!), and, perhaps worst of all, a young ne'er-do-well's girlfriend suddenly becomes convinced that he's a tormented soul whom she must comfort. Of course, most of the villagers' "secrets" were already known by everyone anyway, but this doesn't stop the rage from building, nor various confrontations from taking place.

The novel begins well, in humorous tone, and the scenes in which Joseph Stafford, Faith's publisher, and Barclay Hampton, a well-known critic & journalist (who "can get positively exalted over little old ladies. Especially if they have a Hidden Vein of Ribaldry"), venture to Two River Junction to meet her and observe the locals, rather like beasts in a zoo, are thoroughly entertaining. But it seemed to me that Yenni was uncertain whether her story was a comedy or a melodrama, and sadly she ended up veering way too far in the latter direction for my taste. There's lots of handwringing and agonizing, a possible suicide, and only a bit of entertaining comedy scattered in between.

But along the alley, from which the back yards could be seen, all restraint ended, like that of a fat and dignified woman who had borne her corsets as long as she could and burst out of them into a flowered wrapper.

But overall, it seemed a rather humdrum tale to me, veering more toward Peyton Place than Miss Buncle. And what particularly got my goat here was the fact that, with the exception of Faith herself and perhaps one or two others, the characters are neatly divided into two types: the irrational hothead gossips (women), and the rational and practical (men). Yenni partakes just a bit too much of misogynistic stereotypes, to the extent that by the end I was getting some cynical, exasperated giggles out of counting how many misguided women had to be set straight by their calm, logical menfolk. I could perhaps have forgiven this if it had all been more amusing, but alas.

Although The Spellbound Village is interesting to compare and contrast with Miss Buncle's Book, for most readers I'd recommend a re-read of that classic instead.

Posted by Furrowed Middlebrow at 8:12 AM