'Maud had been a thoroughly nice, if elderly, girl before she had taken up bull-fighting': VIOLET TREFUSIS, Hunt the Slipper (1937) 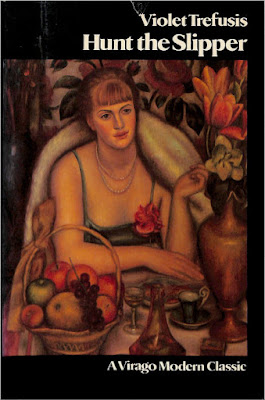 If ever a house was endowed with a personality, it was Ambush. Its moods were many and peculiar. It could frown, it could smile, it could look sentimental, it could look so innocent that butter would not melt in its mouth. Nigel was in the habit of bringing it back a present each time he absented himself. You could tell at once if the present was considered appropriate or not. In the former case it would be instantly absorbed, becoming part and parcel of Ambush, looking as though it had always been there. On the other hand, if it failed to please, try as he might, Nigel could not find a place for the damned thing. Wherever he put it would be wrong, comical, clumsy. Ambush had a fine sense of parody. 'What! Me in that curtain!' it would exclaim, holding the offending drapery at an impossible angle, playing buffoon, courting laughter.

Somehow, when I prepared by 2021 Furrowed Middlebrow Dozen recently, I was laboring under the delusion that I had already read all six of the marvelous Violet Trefusis' novels in 2021. Soon after, I realized I had forgotten this one. True, I had read this before, way back in 2008, but for all I can remember of a book 14 years after reading it, it might as well have been completely new. And now I'm in a bit of quandary, because in the FM Dozen I said that Tandem was my favorite Trefusis novel, but now Hunt the Slipper is giving it a run for its money. Certainly I suspect that HTS is Violet's best novel in terms of structure and literary polish. This wonderful farce about two lovers who are star-crossed as much because of their personal idiosyncrasies (and idiocies, perhaps) as because of the fact that he's an aging playboy and she's married to his friend and neighbor, is perfectly structured to reflect the circles in which the two lovers go round, not unlike the parlor game used for its title.

Nigel Benson, approaching 50, is said to be an aging Lothario (which undoubtedly strikes me differently today, over 50, than it did 14 years ago), who has never really doubted his attractiveness to women before but is suddenly beginning to feel that he's approaching his sell-by date. Nigel lives with his sister Molly, who has seen the ups and downs of many of his previous love affairs, at their country home called (appropriately given Nigel's past) Ambush. And now, his neighbor, Sir Anthony Crome, the closest thing Nigel really has to a friend, has brought home a new young wife, Caroline, to his nearby estate. Although they get off to a bumpy start, Nigel soon finds himself obsessing over Caroline and the will-she/won't-she of her restless discontent.

But the fun really gets going when first Nigel and Molly, and then Caroline and Sir Anthony, set out on Continental excursions, so that the lovers' only communication is by letter. Nigel is needy and insecure, Caroline not very good at letter-writing, and all sorts of passionate motives get attached to their every written word. We get snippets of their letters, but largely the focus is on their failure to communicate and their occasional crankiness to each be traveling with the wrong companion. Here's Caroline in Florence venting her frustration to the boring Sir Anthony:

"'I hate a view,' she complained to Anthony, 'it's like a tyrannical old relation with an ear-trumpet. You're hardly inside the house when off you're dragged out to look at it, and the View strains its ear to catch what you say about it. How I approve of the young man who was in Florence for a week without making any comment on the View. The day before he left, he pointed to the Duomo and said: "What's that hump?"'

As much as I adored every moment of our trip to Florence a few years ago, one can quite see how romantic discord could spoil it.

And here too, as in her other novels, Violet gives us some unforgettable supporting characters. My favorites this time are certainly the hilarious Miss Ryder and Mrs Simpson, two aging Englishwomen whose friendship is being strained by Miss Ryder having been recently to Spain and become an aficionado of everything Spanish, to the immense boredom of those around her:

"She brandished a nicotine-stained forefinger. Mrs Arthur Simpson fidgeted. She had not brought Maud here to talk about bull-fights; she had brought her to talk about antirrhinums. Maud had been a thoroughly nice, if elderly, girl before she had taken up bull-fighting. Now she was off again … 'You know, you'd never believe it, but I'm often taken for a Spaniard. The other day, in Sevilla, a man asked me if I wasn't a relation of Pablo Casamuerta. It appears we have the same nose … ' She paused for controversy, but no one knew Pablo Casamuerte, and no one was interested in his nose"

Hunt the Slipper is really Violet's most sustained and consistent comedic performance, though I do still think Tandem might just squeak ahead as my sentimental favorite of her work. As always in Violet's fiction, too, there are links to be made with real life. According to the foreword to the Virago edition I read, written by Violet's good friend and biographer John Phillips, Nigel is indubitably a stand-in for Violet herself, and Ambush is clearly Violet's Tour de Saint Loup. He also notes how Violet's (in)famous mother, Alice Keppel, society lady extraordinaire and mistress of Edward VII, informs her fiction:

Mrs Keppel's real importance to Violet's fiction, however, lies in the fact that the world it portrays is the kind of world she enjoyed, a world her daughter failed to re-invent, but inhabited in an ironic and parodic spirit. The game, in Hunt the Slipper, is fixed in advance, Violet is, by now, as much in complicity with pusillanimous Nigel as with passionate Caroline.

This is no doubt why Violet understands this world so well and is able to mock it so delightfully.

On a side note, this novel was dedicated to Violet's close friend, French novelist Princess Marthe Bibesco, who made a surprise appearance on my first Unfurrowed Dozen list a little while back.

Now this post really does complete my reviewing of Violet Trefusis' novels, at least until some savvy publisher translates those other two into English. And while I have had difficulty picking a favorite, I have no difficulty at all recommending her to those with a taste for the sophisticated skewering of sophisticates.
Posted by Furrowed Middlebrow at 7:26 PM