Hardly anybody who drifts into Swanworth ever comes with a purpose. After all, there is nothing to do and nothing special to see. Anyway, that is how I feel about it. It seems to be a very good place to rush through quickly in a car or a tandem, on the way to somewhere else worth while, and if the speed they whizz through is anything to go by, they cannot put it behind them fast enough.

This one’s been on my TBR for years, and it was one of many (many, many, many) books I acquired in the past year out of my purely unselfish desire to help global booksellers survive. It seems that Natala de la Fère is actually of French origin, so she’s not on my master list, though most of her books appear to have been written in English and set in England, so perhaps I need to revisit that.

The mad Motleys are, if not actually mad, a distinctly eccentric family residing on a hilltop above the small English village of Swanworth. There is the imposing and somewhat alcoholic Mr. Motley, his wife who is convinced she’s descended from the Druids, and their three children, son Bark, daughter Spot, who is never without her gun and hunting dog and keeps the family perpetually oversupplied with game, and the youngest, Boadicea, who is the narrator of their tale:

They look upon me as something that dropped into the world one dismal chilly night when my mother was not paying due attention to her actions, and my father was lying drunk and incapable under the refectory table in the 'workshop' in the yard, although what he has ever done in there but drink, I have never discovered.

The “novel” is really more a collection of stories of the Motleys’ various misadventures. Our introduction to the family is by way of the delightfully morbid tale of eccentric Aunt Bessie who, utterly convinced of her impending death, orders her own coffin. She then survives for several more years, keeping it carefully polished in her bedroom, until one day picking dandelions in the hills she treads on a landmine left over from Army exercises, and there’s nothing left of her to bury. Nothing else in the book is quite so Barbara Comyns-esque, but de la Fère might be considered a somewhat tamer Comyns cousin.

In other chapters, we meet Old Mrs Sprout, the village herbalist, whose cottage is purchased by an American and disassembled with the intent of moving it to the U.S., but then for some reason it’s rejected, brought back to the village and reassembled again. There are visits from an insurance company fraudster who gets nabbed by Mr Motley, overbearing Cousin Ontario from Canada who wants to get in touch with his roots (though his roots aren't enthusiastic about the prospect), and a film crew eagerly capturing the village eccentrics. Then there’s the flood that covers all of Swanworth but for the Motleys’ hill, and the unlikely appearance of an elephant in the Motleys' backyard.

Since each chapter of The Mad Motleys is basically self-contained, this is an easy book to pick up and put down, which can sometimes be a good thing. It does make it less of a book to really sink into and lose yourself, but Boadicea makes a charming narrator and there are certainly some chuckles here. For example, I don’t really bake, but if I did I’m sure it would look something like Ma Motley’s efforts:

My mother was in the kitchen swathed in the torn-up sheets she keeps specially for the one day a week she bakes the bread. Before she thought of the sheets she went about the house dripping flour all over the place, because when she bakes bread she might just as well get into the flour bin to mix the dough instead of half breaking her back bending over it.

I haven’t found a lot of details about Natala de la Fère, but I have found that she published four books in all, beginning with a memoir/travel book called Italian Bouquet (now in my hot little hands—I couldn’t resist the dustjacket). Two additional novels followed The Mad Motleys—All My Fathers (1959) and A Mess of Potage (1961, published in the U.S. as Soupe du Jour). In the latter, a French family accidentally eats their grandmother…

Although Mad Motleys isn’t an absolute favorite, I might just have to check out more by this writer with a quite unusual sensibility! 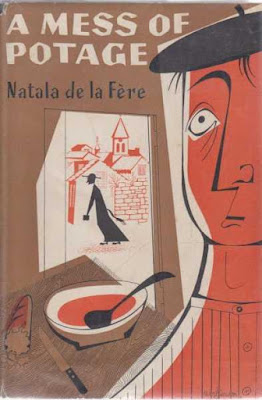 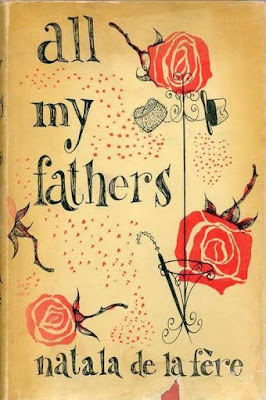 Posted by Furrowed Middlebrow at 7:34 AM