[S]he bought the latest Vogue, and was sitting reflectively turning pages of gowns which distorted the human shape hanging on women as thin as rakes, posed with straddled legs and wasted bellies thrust aggressively forward, when Lawton came in from the farm.

Now if a description like that doesn’t make you sit up and take notice, I don’t know what will. And there are rather brilliant, dark, misanthropic descriptions like this here and there throughout The Perfectionists, the final novel by the eccentric Isobel Strachey, author of seven highly-praised novels 1945-1961. Having read the first few chapters, I thought, as I’ve put in my title, “Barbara Pym on steroids.” A bit darker, a bit more cynical, a bit more over the top than Ms Pym, but very much of the same species. But I haven’t quite been able to figure out how I feel about the novel as a whole. 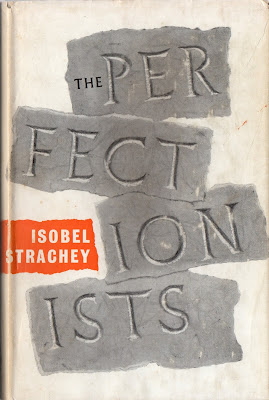 So … naturally, I took shelter in digression, did some additional research on Strachey, and found some interesting tidbits.

She was a Strachey by marriage to the eminent Lytton’s artist nephew John, whom she then divorced, and she was herself a painter of some merit. She spent some of her youth in Argentina, where her father worked on the railroads, which clearly influenced her novel A Summer in Buenos Aires. During WWII, she worked as a translator and decoder for MI5, which one obit suggests inspired her to begin writing. It’s quite striking, as forgotten as she is today, that her novels were sufficiently famous that in 1963 a Guardian critic could suggest that Margaret Drabble was "by Elizabeth Bowen out of Isobel Strachey" and assume her readers would understand the reference. (Not certain of that comparison with Drabble, but that’s what she said.) And Strachey may also have had in common with Pym the difficulties of being an author of “comedies of manners” in a publishing world turning toward the more jaded, psychological fiction of the 1960s and after, as another obit mentions at least one additional novel, called The Dressing Gown, which she finished in 1986, the year before her death, and which remains unpublished. Other sources also suggest she continued writing after the book publications ceased. Could it also have been a factor that her final two novels were published by her son-in-law, Anthony Blond, from whom her daughter was divorced before the last appeared? 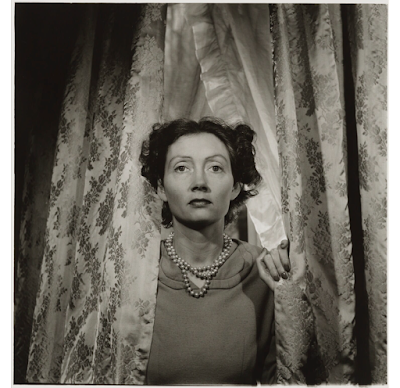 And, because I rather think from reading The Perfectionists that she would have found it hilarious, I’ll share that novelist Simon Raven (whose Wikipedia page says he was “known for his louche lifestyle as much as for his literary output”, so it could be a case of pot and kettle), in a book of essays and memoirs that was later withdrawn, said that in her youth Strachey’s legs “opened as easily and as often as a pair of scissors.”

Indeed, Strachey doesn’t seem to have been any more shy in writing about sex than she was in having it. There’s nothing explicit or pornographic in The Perfectionists, but it must, even in 1961, have raised a few eyebrows with its portrayal of a gay couple of long standing, Paul Musgrave and Claude Garland, whose domestic peace is shattered by the marital difficulties of their neighbors Lawton and Susan Cheke. And while the portrayal of the gay couple couldn’t be described as positive, none of the other characters are portrayed positively either, so there’s no real homophobia about it (beyond the use of some outdated language), even if there is considerable misanthropy.

Strachey must surely have had some gay men close to her, and a short review by Marghanita Laski of one of her earlier novels suggests (if I’m not misreading Laski’s coyness) that gay men may feature prominently there as well. (Laski says of Quick Bright Things that it’s a “charmingly silly--bit of chit-chat about a gay, feckless, divorcee, and a gawky daughter, and some perfectly delightful men”.) At any rate, whatever their shortcomings, Paul and Claude are entirely plausible--Claude a die-hard misogynist disgusted at the mere thought of women and their parts, who occasionally attempts to convert handsome local lads to his way of thinking, while Paul leans toward bisexuality (though indeed quite sluggishly, as it has taken him 20 years to feel the urge).

Susan’s problems, during which she comes to rely on--and seduce--Paul, are based on having married a farmer, Lawton, who is really in love with a London society lady old enough to be his mother. Eleanor Locke is a well-to-do manipulator who has kept Lawton on a leash as her lover since well before her husband died, but refuses to marry him for the sake of appearances. She gives him the farm to keep him handy, but a couple of years after his marriage begins to regret letting him get that far and begins to tug on the leash. Crises and tragedy ensue (though the tragedy, in Strachey, is viewed as cynically as everything else, so there’s no need to shed a tear).

Strachey is undoubtedly a writer--some of her descriptions, as dark and threatening as any midnight mire, are breathtaking. Check out this description of the local fair:

The tent where the beer was sold was slushy with black mud. Country people stood sturdily about, some bursting with glee like ripe, rosy apples, others grim, lined and dour like cadaverous cheeses, glistening in the lamplight. The soft greyness outside faintly pricked with stars and seemingly transparent to all eternity had suddenly turned to inky blackness enclosing them tightly in a little glittering cave. All seemed aware of each other's perspiring faces and eager to communicate either good cheer or gloom; or held proudly apart with shining eye-balls and a flashing ring displayed on brown fingers curved round the smooth column of a glass. A man in corduroy trousers and a thick jacket, tilted his battered felt to the back of his head and bravely began to sing above the hurdy-gurdy din.

Apples and cadaverous cheeses, oh my.

And by 1961 her perspective on her youthful indulgences must have soured a bit, judging by this hilarious but distinctly unromantic kiss:

She shivered with wet and cold and he put his arms round her and they sat pressed cheek-to-cheek gathering warmth like a connected radiator. Presently she gripped his hands as he felt for her breasts and they were drawn to rubbing their rubbery, soft lips together.

In her descriptions and her unforgiving perspective on human frailties, then, Strachey is undoubtedly brilliant and entertaining. But her characters, almost entirely portrayed as selfish, weak, vain, manipulative, or destructive (indeed sometimes all of the above), did begin to wear on me and even bore me well before the end of the novel. And the plotting as well seems a bit aimless, with perhaps the most intriguing character of all, the local vicar, featuring prominently only in the last 20 pages or so, rather a waste of some glorious description and an almost-actually-likable character.

On the other hand, as I’ve gone back and looked over marked passages to write this post, I’ve been a bit wowed all over again by Strachey’s language and daring, and have been inspired to order three more of her novels. So I'm not sure it's appropriate to say that I either loved or hated The Perfectionists? But I may have been a bit seduced by Strachey herself.

Posted by Furrowed Middlebrow at 7:46 AM