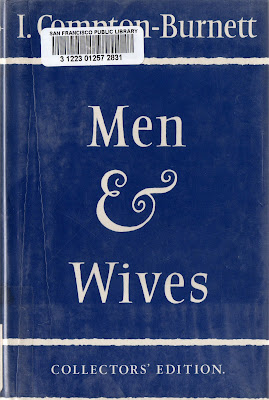 I’m setting myself a bit of a challenge writing about Ivy Compton-Burnett, because Dame Ivy is a notoriously challenging author to write about (as well as to read). I love that she had the self-awareness to quip about her perpetual lack of mainstream popularity despite considerable critical acclaim (as quoted in the title of this post). And indeed, since her death in 1969, her books have continued to receive enthusiastic acclaim from the few while dodging any wider fanbase and peeping sporadically in and out of print.

Her original publisher, Gollancz, took the extraordinary step of releasing complete sets of her books in hardcover as late as 1984—something that happens with precious few modern authors and which reflects how seriously she was taken. Virago and Penguin Modern Classics published most of her novels in the 80s and 90s. The prestigious New York Review Books Classics have kept two of her titles, A House and Its Head (1935) and Manservant and Maidservant (1947), in print for a couple of decades now. In more recent years, Bloomsbury released e-books of most of her work (even including her disowned, autobiographical debut, Dolores (1911), the only one of her books not written in more or less the same unique, uncompromising style—primarily told via implausibly formal, philosophical dialogue and focused obsessively on the darker elements of nuclear family life in late Victorian years). Now, it appears that even those e-book versions have largely lapsed back out of print, so for her fans, few as they may be, it will be back to trolling second-hand shops and academic libraries to get hold of her.

Speaking of which, I must have discovered Dame Ivy when NYRB Classics released their two titles in about 2001. I loved both of them and went trolling second-hand shops for more. At a (now long defunct) bookstore on Irving Street in San Francisco, as I happily seized on and purchased a couple of her out-of-print titles, I remember being told by the owner that I would have had a wider selection to choose from but only a few days before, film director John Waters had been in the store and stocked up on Compton-Burnett himself. “You’re in good company,” she told me. Certainly interesting company, at least (whether John Waters would appreciate being called “good company” might be in some doubt), and I was sure I was on to something. 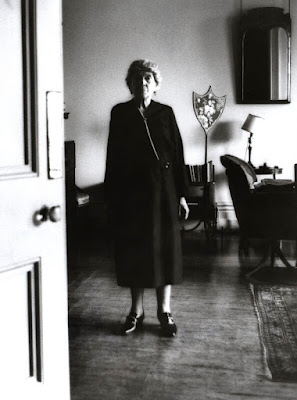 During my Dame Ivy kick of 2001-2002, I read six of her novels, and in the years since I’ve read a couple more, so Men and Wives makes my ninth in all, and my first since 2013. Though I always think of her as a favorite and even an “important” author, both generally and in my reading life, my sporadic indulgence in her work hardly suggests ardent passion, does it? And yet, when I noticed that, rather surprisingly, the San Francisco Public Library had five of her less well-known titles, I spontaneously put in holds for all five, and as soon as I glanced at the opening pages of Men and Wives, I fell headlong into it, shunting aside the other books I was already reading.

There’s usually a monster in Dame Ivy’s tales—often an egomaniacal, dictatorial parent. Here, that’s clearly Lady Harriet Haslam, a self-absorbed malingerer who whines and moans and stifles her three sons and one daughter as well as her dithering husband, Sir Godfrey. As with most of many members of this coveted character category (especially, it seems, in novels by women in this time period), Lady Harriet lavishes affection only with strings attached, and laces her devotions with scolds and mockery and devaluations:

“I am a torment to you all, and a burden on your hours that you never escape! But I am as much of a burden on my own, ten thousand times more of a burden. Griselda, my darling, don’t look distressed; don’t waste a thought on your harrowing old mother. Don’t think of me. Be happy.”

Ah, how many characters in novels by authors ranging from Barbara Pym to Richmal Crompton and from Elizabeth Eliot to D. E. Stevenson might have uttered those very same words! (And how they bring back memories of my own mother…)

But Lady Harriet has apparently behaved in this way for too long and her power has somewhat abated. Her children are grown, though still unmarried, and are no longer so easily cowed, and they and Sir Godfrey seem to share a subtle, mutually understood resistance to her, even while Sir Godfrey spouts his adoration and respect with every breath. Harriet is driven to more extreme measures, which I won't detail here, but even in her defeat (if that’s what it is) we see her influences passed on and her claws scratching at those around her. 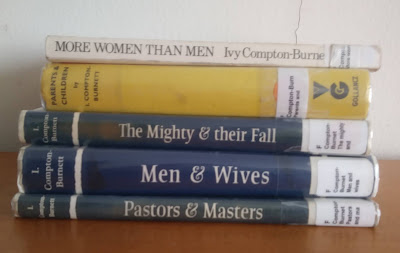 There’s far too much here to unpack and summarize. There’s Bellamy the rector, whose wife has left him and set her sights first on the local doctor and then on Harriet’s oldest son. There’s Mr. Spong, a neighbor, who loses his wife and attaches himself, rather depressingly, to the Haslam family during their ups and downs. There’s a household of widowed and unmarried sisters, always available to comment on the misfortunes of others. And there’s the impassive butler Buttermere, before whom all censor their discussions, though he clearly couldn’t care less about any of them.

It will all sound familiar to anyone who has read one or more of Dame Ivy’s books. They’re all very much the same, though some are livelier than others, some more outright funny in their pitch black sort of way. To a large extent, they’re interchangeable (even to their titles, which are always conjunctive—Daughters and Sons, Parents and Children, The Mighty and Their Fall, The Present and the Past, etc.). And yet, there truly is something about them. I found myself thinking of Greek tragedy while reading Men and Wives—Aeschylus domesticated for the nuclear family but retaining many of the rudiments—passions, malice, vengeance, hubris, domination, jealousy—similarly stylized and formal, and always featuring a chorus of subsidiary characters to comment on the mayhem.

These novels are hard not to put down (at about the halfway point of Men and Wives, I found myself considering starting a different book, for a break if nothing else—the intensity, even leavened by dark humor, does take it out of one), but I resisted the urge, and ultimately, at the end of it all, I did—as I have eight times before—feel I’d experienced something rather awesome.

And now, there’s four more of Dame Ivy’s books on my shelves. Do I feel like another awesome experience right away?

Posted by Furrowed Middlebrow at 8:24 AM